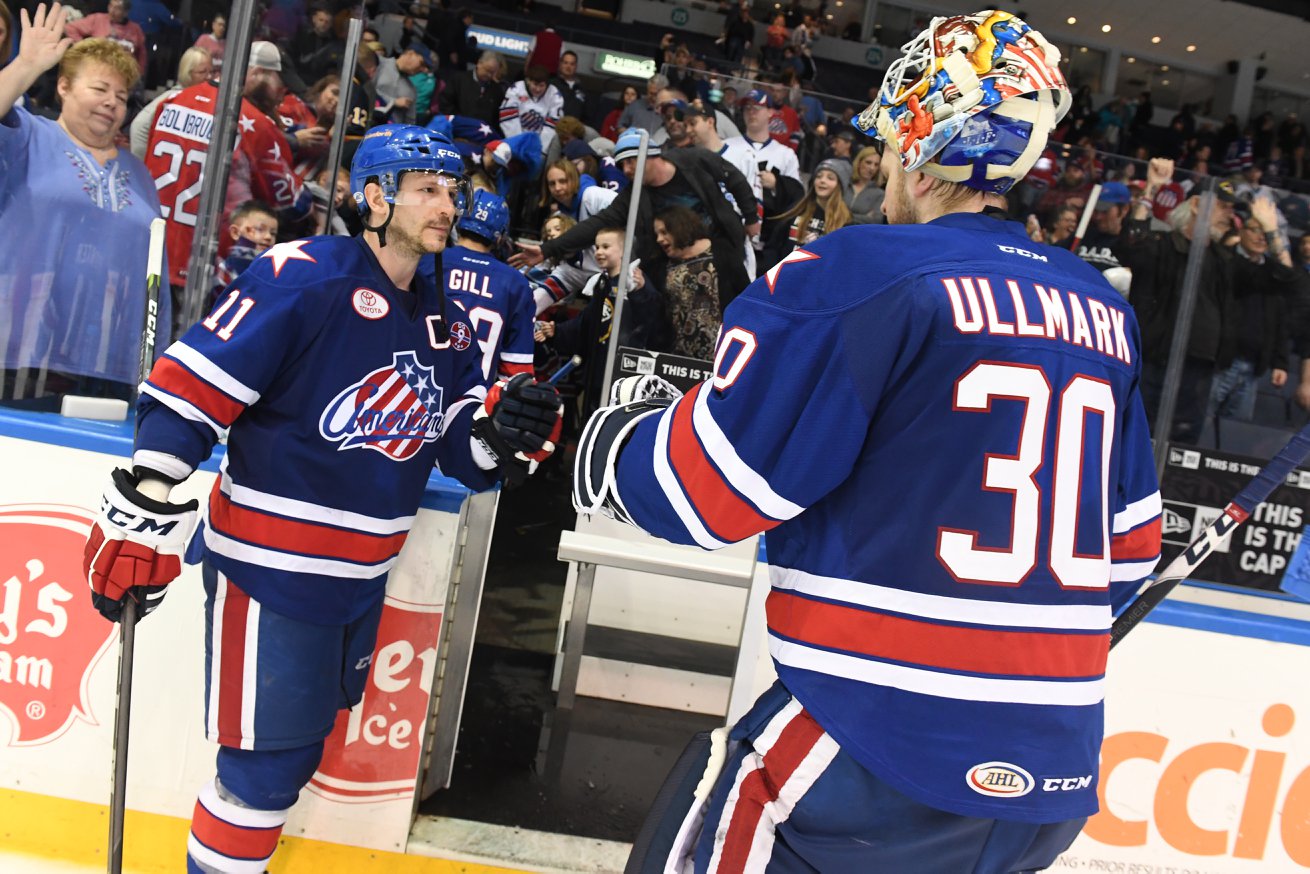 The 2017/2018 Rochester Americans season is over after losing three straight games to the Syracuse Crunch. The better team won. Playoff hockey requires a team game that Syracuse had, Rochester didn’t.

It was an impressive crowd for a Wednesday night and the first round of playoff hockey, especially with the team down by two games in the series. An announced crowd ofÂ 6,145 filled the building and it felt like there was more.

“It was amazing. The support we got tonight was incredible. You just don’t see that type of support on a Wednesday night in the first round for as long as I’ve been around,” Nathan Paetsch said about the crowd size. “We really wanted to go farther for them and at least get another game for them.”

Over the course of the three games the Amerks were outscored 18-10. A goal on a 5 on 3 power play in games two and three could have changed the outcomes. A puck finding the net instead of a post in game two could have changed an outcome. Those are things the Amerks were able to correct in follow up games in the regular season but came back to bite them in the playoffs.

Linus Ullmark was brought to tears after the game saying, “I was looking forward to this my three years playing here. Just to go out there and not perform, it just hurts. It just hurts.”

That’s a sign of a player that cares. A player that wants to win. He invested himself in Rochester and to be swept in the first round and have 16 goals scored against him is painful (the other two were empty net goals). It was raw emotion

“You can’t really put that all on him,” Zach Redmond said after the game. “I think a lot of it’s all on the defense or the forwards not blocking shots, the defense not boxing out. He’s been our guy all year.”

Ullmark was emotionally hurt but another player was physically hurt in the game. Late in the third period Justin Bailey was upended by Daniel Walcott and sent to the ice landing on his left shoulder. He immediately got up in pain and went to the locker room. No other updates have been provided but he did go to the hospital after the game.

Chris Taylor described the game and this can also describe the season, “I thought we gave everything we had unfortunately we just made some mistakes at the wrong time.”

The first half of the season was all success. The second half was filled with struggles and losses which concluded in this three game sweep.

Game three started out different than the first two though. For the first time in the series the Amerks scored first and had a lead. Kevin Porter went wide with the puck, cross ice pass to Zach Redmond and the arena was alive only 3:25 into the game.

For the second game in a row Rochester had a 5 on 3 power play but were unable to score. They had a 5 on 3 in game two as well. Scoring on either of those opportunities could have been game changers but they didn’t. Syracuse stopped them.

Matthew Peca tied the game with 43 seconds left in the first redirecting a shot from Dominik Masin.

Things were still looking good heading into the second period. Sean Malone won a face off to Justin Bailey who fired a quick shot from the point and the Amerks had a 2-1 lead at 7:48.

This is where it went down hill. Cal Foote scored 30 seconds after Bailey to tie the game. Olivier Archambault scored 19 seconds after that. Mitchell Stephens scored just over two minutes later.

Colin Blackwell had a short handed breakaway but appeared to get down too low in front of Connor Ingram and was unable to get off a quality shot on net. The Crunch took off down the ice immediately after, Mathieu Joseph scored at 6:05 of the third period to give the Crunch a 5-2 lead the building was silent. Danny O’Regan scored at 13:50 to give the Amerks some life but it wasn’t going to be enough.

A similar story in game two, the Amerks got close, the Crunch took a few steps forward and took off.

“The fact that we were playing playoff hockey,” Zach Redmond said after the game talking about a positive. “It was good for us to do that for the city.”

“So proud of these guys. The excitement they brought back to the city and the way they came every day to work,” Nathan Paetsch said after the game. “The character was through the roof in this dressing room.”

Rochester hasn’t won a playoff series since 2005 when Ryan Miller was on the team. The goal of the season was to make the playoffs but after early season success the goal changed to needing a long hard playoff run. Being swept in three games and being outplayed didn’t fulfill that goal.

He went on to say that there was glimpses of it but many players were uncomfortable and didn’t play with a lot of confidence. He didn’t go into any names. Syracuse had a lot more confidence along with goaltending and won the game.

Syracuse changed their goalie in game three and Connor Ingram won them the game. Could Adam Wilcox have done the same for Rochester? We’ll never know. This team belonged to Linus with everyone supporting him, it just didn’t go as planned.

A tight group within the locker room was also seen out in the community which helped them win over fans. Everyone knows about the struggles that the Buffalo Sabres have faced for years and because of that the Amerks have struggled as well. Making the playoffs can be considered a step in the right direction for the organization but it’s not the success they need.

Stats at the end of the season are what matter and the team finished with zero playoff wins. Counting the regular season and playoffs they played 79 games and finished with more losses than wins, a record of 37-42.

Here’s other recaps that cover other details as well that are worth reading:

Syracuse.com -Â Syracuse Crunch scorers rocket into second round of playoffs: ‘Never take the foot off the gas’

Hudson Fasching was scratched for the second game in a row. Alexander Nylander was limited with ice time until the Crunch started running away with the game. He was given more time as the game went on but again didn’t produce anything. Nylander finished the three game series with only two shots on net.

Casey Nelson was out again as well with an upper body injury from game one.

The goal horn returned to action after being on the injured list sinceÂ April 7.

Next up is locker clean out and exit meetings.

Thanks for reading this far and reading all season! After watching almost every practice and game along with countless interviews it feels like yesterday training camp was finishing up. Even though they’re done on the ice there’ll be more stories and interviews to come, stick around.

1 thought on “Zero Playoff Wins – Amerks Season is Over”