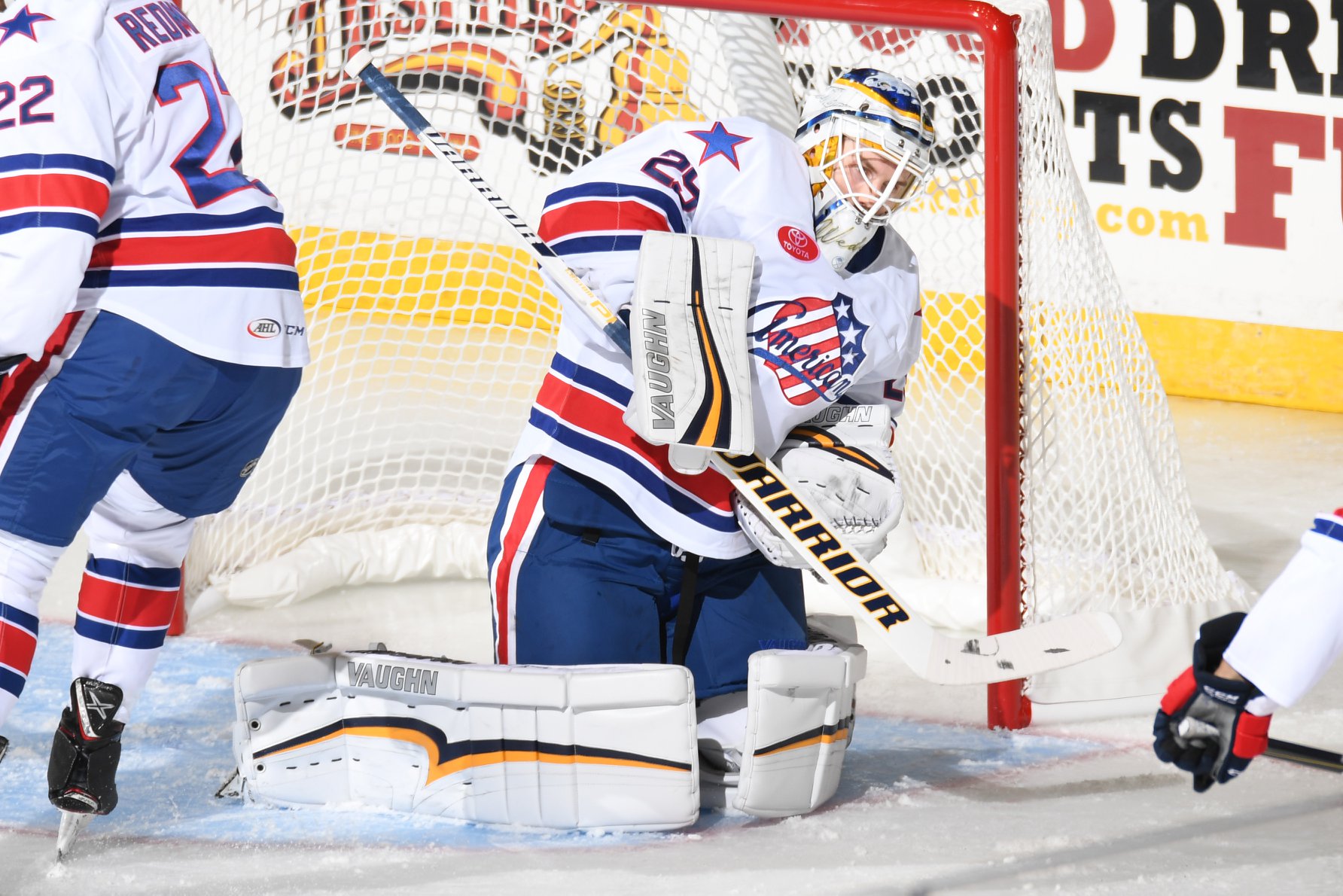 Remember all that talk about being an elite playoff team? That all vanished for just over two hours on Friday night when the Rochester Americans failed to play a game of hockey on opening night.

Before Charlotte scored two goals within 35 seconds of each other there were signs that the game wasnâ€™t off to a good start. After a week of practice everything looked off. They didnâ€™t look that way in practices, I was there for every one of them.

Chris Taylor walked into the post game interview and jokingly said he had hoped no one was still around that wanted to talk to him. The head coach didnâ€™t offer up any excuses.

“We can use every excuse. Thereâ€™s no excuses for the way we played tonight. Iâ€™m not going to buy that for anything. We talked about it after the game. Unacceptable.”

“Nothing. Disappointing. I just like how we competed at all,” is what Taylor said immediately after the game. â€œWe play these games tomorrow night and there was nothing that showed that weâ€™re playing them ever again. It was 6-2 and we didnâ€™t even touch anybody out there.â€

A goal 32 seconds into the second period from CJ Smith raised the energy level after fans returned to their seats disappointed by the concessions (more on that at the bottom).

Lawrence Pilot scored his first professional goal on the power play to tie the game and there were signs of a comeback.

Captain Kevin Porter started with the simple explanation, “We werenâ€™t ready to play,” For game two of the season he added, “be ready.”

Kyle Criscuolo used a common line from football when he started his post game interview, â€œWeâ€™re going to look at the film tomorrow.â€

For a team that expects to go deep into the playoffs with a stacked roster it was as if everyone forgot it was a team game.

“Mistakes I’ve never seen before,” Taylor said after the game. “Our defense jumping up out of nowhere. In the offensive zone we have it, all of a sudden we have no one on our blue line. We’re all trying to play offense.”

“Everything,” is what Chris Taylor said when asked what has to be changed for Saturday night.

Scott Wedgewood is the only thing that doesnâ€™t have to change too much for game two. He was tested early in the game and made some highlight saves. This wasnâ€™t the type of game a goalie was going to steal a win. Chris Taylor talked about wanting to have everyone stay at the circles so Wedgewood could face 15 more shots and improve his save percentage.

Common questions have been how did Alex Nylander do? How was Rasmus Asplund? Victor Olofsson? Pilut?

Pilut improved as the game went on. Nylander won some puck battles he wouldn’t have the night before. Asplund and Olofsson have a lot of potential. One game a blowout 6-2 loss isn’t the best situation to over analyze individual games.

There’s likely to be some roster changes on Saturday night. Taylor Fedun made a number of poor decisions, newly acquired Jack Dougherty is available. On the offensive side replace Justin Bailey and Tyler Randell didn’t contribute like they were expected to with physical play and offensive chances. Yannick Veilleux and Myles Powell have fresh legs after sitting out on Friday night and can offer those two elements to a game.

Not only was the on ice product a let down but so were the concessions. No one has ever claimed that Blue Cross Arena has world class concessions but they’ve improved year after year. You could get a decent meal at the game at an affordable price.

That changed Friday night when the only food available was burgers, dogs, pizza, chicken fingers and a chicken nugget sandwich. They called it a chicken sandwich but wasn’t much more than a nugget on a bun. French fries were questionable depending on whether or not the fryer was working at the stand. Pretzels, pop corn and nachos were in stock.

Arena management was handed over to Pegula Sports & Entertainment on August 1st and Delaware North started hiring shortly after for arena workers. That gave them two months to prepare for Amerks opening night. It wasn’t enough time.

I’ve been assured that things will get better but when billion dollar companies are involved fans have valid reasons to complain about the situation on opening night. This wasn’t a new startup getting their feet wet in arena management.

Amerks and Checkers play against each other Saturday night October 6, puck drops at 7:05pm. Eat at home and then come cheer on our hometown team.

This City. This Team. WE ARE ONE, WE ARE ROCHESTER.