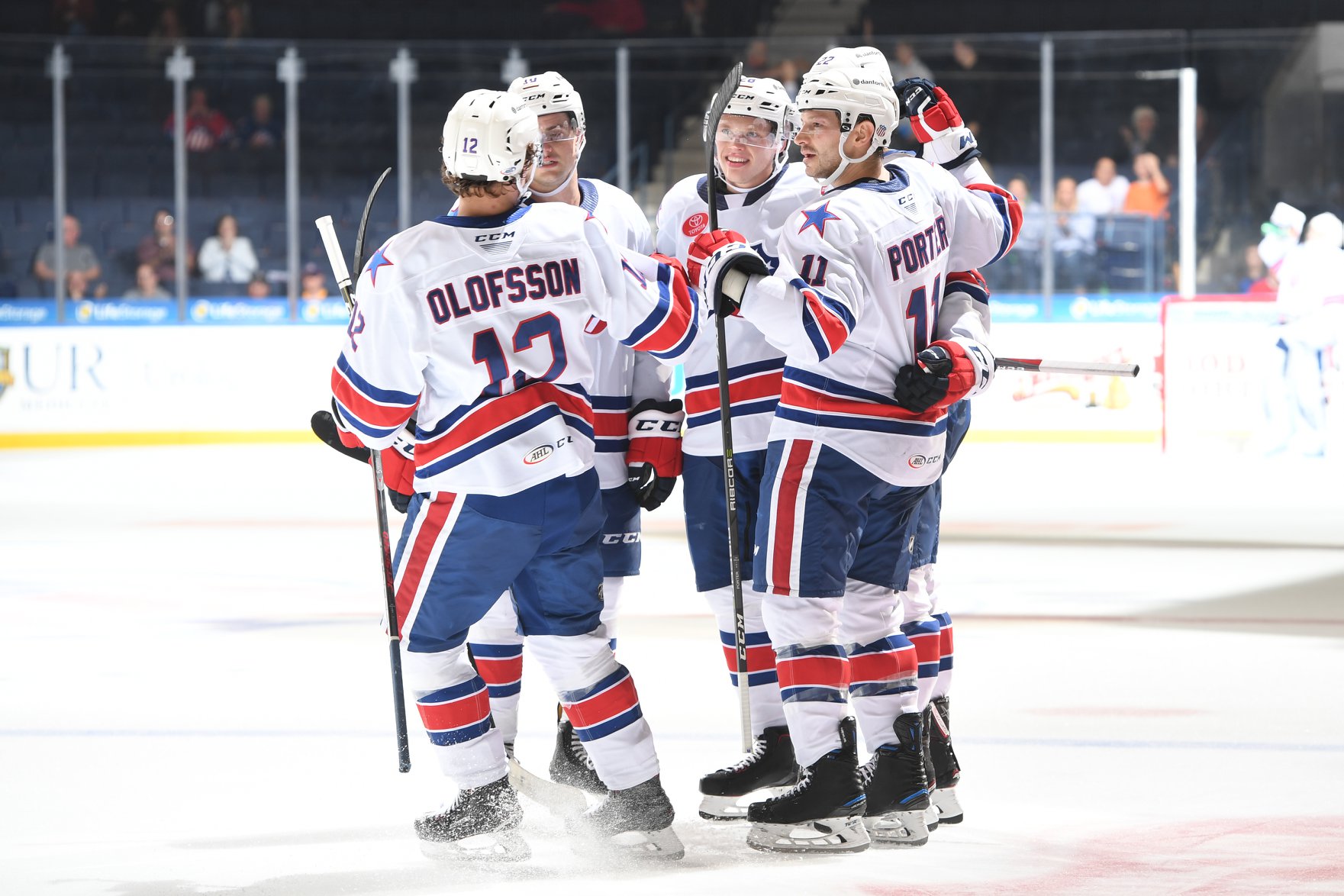 That’s the game the Rochester Americans needed to play after back to back loses. A steady game from Adam Wilcox (30 saves) in net and six different players with multi point games resulted in a 6-3 home win for the Amerks.

Rochester killed off seven penalties, way too many, and scored on three of four power play opportunities.

Here’s a recap period by period.

The word terrible comes to mind in describing the first almost 10 minutes of play for Rochester. Syracuse came out flying and controlled the pace of play. Syracuse had a 6-1 lead in shots before Rochester found their feet.

Danny O’Regan scored the first goal of the game 11:45 into the first on a five on three power play. Alex Nylander fired a shot wide (or on purpose?), O’Regan caught it off the back boards and found the back of the net. Will have to see a behind the net replay, may have gone in off Pasquale. Zach Redmond started the play with a nice pass between a defenders legs to get the puck to Nylander.

With about three minutes left in the first the Amerks had a 12-7 advantage in shots. The puck was moving. The passes were connecting. Things were looking good.

Alex Barre-Boulet tied the game with a power play goal for Syracuse with 0.9 seconds left in the period. The Crunch appeared to be watching the clock waiting for a last second shot and with a second left Will Borgen gave him the space to snipe a shot past Adam Wilcox.

Amerks finished with a 13-10 advantage in shots.

Syracuse had trouble clearing the red line on a power play which allowed Kyle Criscuolo to steal the puck. Carried it in, sent a pass to CJ Smith for a one timer and a short handed goal.

CJ Smith returned the favor with another steal, a pass to Kyle Criscuolo who went down low and beat Eddie Pasquale to put the Amerks up 3-1.

A Zach Redmond one timer from Lawrence Pilut made it a 4-1 game with a power play goal.

Defensive zone turnover by Justin Bailey attempting to clear the zone resulted in Jonne Tammela scoring and getting Syracuse within two goals.

Overall a much better period. They started attacking the Crunch puck carriers which resulted in turnovers. They prevented Syracuse from having a transition game.

Lawrence Pilut unleashed an excellent wrist shot from the point off a pass from Zach Redmond to give Rochester a 5-2 lead at 2:55 of the third period.

Victor Olofsson scored his first goal with a wicked shot from the top of the left face off circle. He slid into an open spot, Danny O’Regan delivered the pass and he rifled the puck top corner.

Syracuse was looking lost in the second half of the third period, much like Rochester did in the first game of the season. It’s only the first out of 12 games between these two teams this season but at least it started in favor of Rochester.

With just over 15 seconds left in the game Syracuse didn’t hold back and made it a 6-3 game and that’s how it ended.

Concessions have been a hot topic and were improved for the third home game of the season. Ice cream machines were working, they had mac n cheese back on the menu, garbage plates, the chef stand and poutine fries again!

The ice cream stand also has Loganberry! Something that probably only excites those originally from or visiting from Buffalo.

We added a new page to the site to track starting lines by game. It’s a work in progress with how we present the information but it’s a start. We also have a roster and injuries page as well.