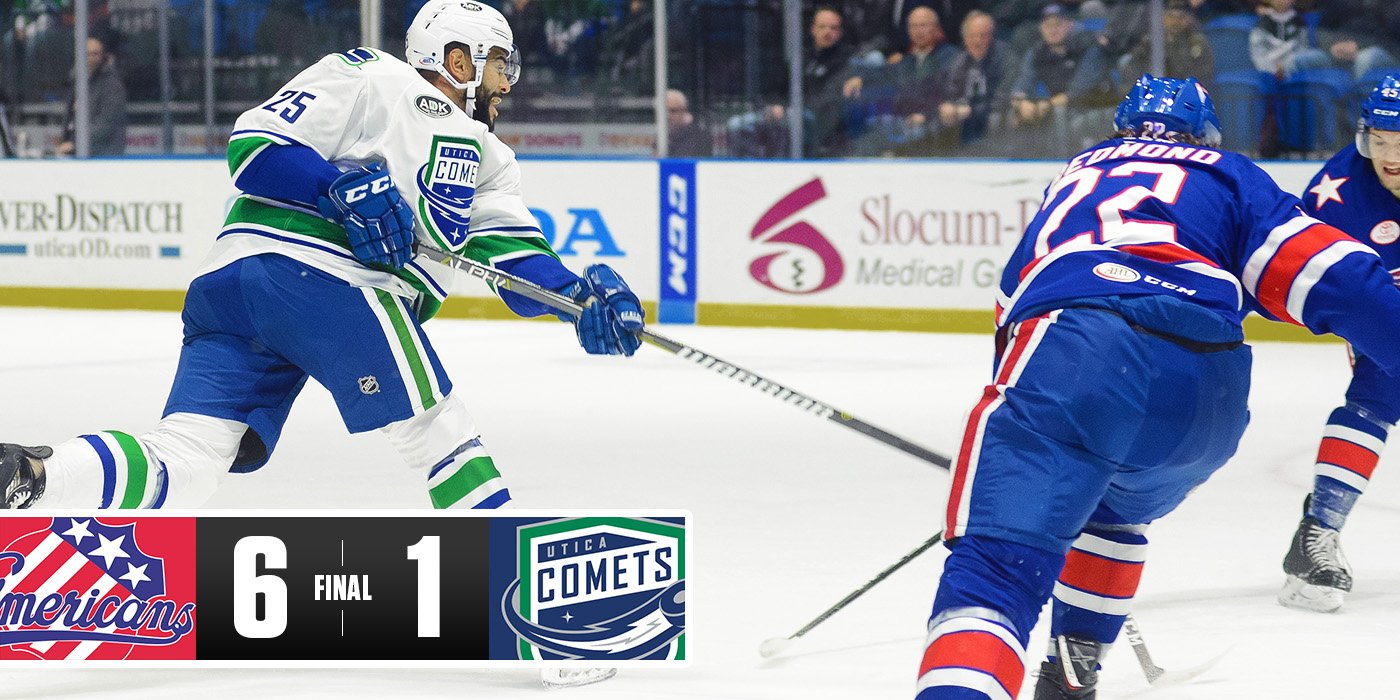 The Rochester Americans red hot power play continued in Utica on Wednesday night contributing four of the six goals scored leading to a 6-1 win over the Comets and extending the winning streak to four games.Â The last two games for Utica were 5-3 and 7-4 wins over Toronto. The defense did a great job limiting league leading goal scorer Reid Boucher to only two shots on net.

Four players finished the game with multiple points on the night – Olofsson 2G+2A, Redmond 2G+2A, Pilut 3A and Nylander 1G+1A. Victor Olofsson through six games leads the American Hockey League with 12 points (5G+7A) with 11 of those points coming in the last four games.

Four of the top 10 scorers in the league are Amerks players:

Even though it’s early in the season those are some impressive numbers.

The last time Rochester won five straight was April 2 to April 12 during the 2013/2014 season, they’ll have a chance on Friday night. The first two games of the season had many questioning why they went to games. The team has found their game and there’s many reasons to give the team another chance on a Friday night.

Here’s a quick recap of the scoring in the game.

Zach Redmond scored his third goal of the season and the eighth power play goal of the season for Rochester at the 2:16 mark of the first period. Kevin Porter sent the puck up the boards to Lawrence Pilut, a quick pass to Redmond and it looked like it may have gone in off a Comets player.

Ten minutes later at 12:17 the power play struck again. Zach Redmond scored his fourth goal of the season, all on the power play, off a perfect pass from CJ Smith for the one timer. The Amerks had a five on three advantage.

Victor Olofsson scored 33 seconds later skating in and shooting the puck bar down over the left shoulder of Richard Bachman. Lawrence Pilut tallied his seventh assist of the season, five of those on the power play, with the pass up ice to Olofsson.

Here’s a longer view with the pass up ice from Pilut to Olofsson. pic.twitter.com/sAQfGaFTFT

The puck barely left the Comets end in the period and they took advantage of it.

Amerks finished the period 3/4 on the power play and had a 11-3 advantage in shots.

Utica scored their first of the game with aÂ Olli Juolevi power play goal at 6:24. Similar to the Redmond goals, a great shot from the point.

A game of power play goals. Comets score their first of the game. Olli Juolevi from Kero and Boucher. pic.twitter.com/I8VQsnlcqK

Victor Olofsson continued lighting up the scoreboard with his fifth goal of the season with another rocket of a shot over the left shoulder again of Bachman. Rasmus Asplund earned his first point of the season working the puck along the boards out to Nylander who passed it to Olofsson.

#GOALOfsson scores AGAIN! 2nd of the game, 5th of the season. Assists to Nylander and Asplund. #Amerks up 4-1. pic.twitter.com/x6yOiniKxk

At 13:53 of the period Danny O’Regan scored his second of the season redirecting a shot from MacWilliam at the blue line. It was originally credited to Asplund from Olofsson and O’Regan but MacWilliam clearly shot the puck first. Later corrected to O’Regan from MacWilliam and Olofsson.

#Amerks up 5-1!! They gave Asplund credit but looked like it went off O’Regans stick. They also gave Olofsson credit for 1st assist but MacWilliam shot it. Whatever, figure it out later. Great lead. pic.twitter.com/l2gUea5NN9

Utica did a better job putting the puck on Wedgewood and finished the period with 11 shots, Rochester finished with six. The defense did a solid job of limiting those shots to the outside.

Alex Nylander scored his second of the season and fourth power play goal of the game for Rochester at 9:51. Brendan Guhle took the initial shot from the point, the rebound went straight to Asplund, pass to Nylander and he scored.

#Amerks 6th goal of the game, 4th on the PP!! Asplund to Nylander. Assist to Guhle as well who took the initial shot and the rebound went to Asplund. pic.twitter.com/GHtCFmXCLt

Scott Wedgewood made a great rolling arm save late in the third period to keep Utica to one goal on the night.

Wedgewood rolling around makes an arm save and it’s still a 6-1 lead for the #Amerks. pic.twitter.com/8rxfZgtA5v

Rochester had a 13-11 advantage in shots in the third period. The best scoring chance Utica had was that sequence above when Wedgewood made the sprawling save.

Rochester finished 4/5 on the power play, Utica was 1/3 on their power play.