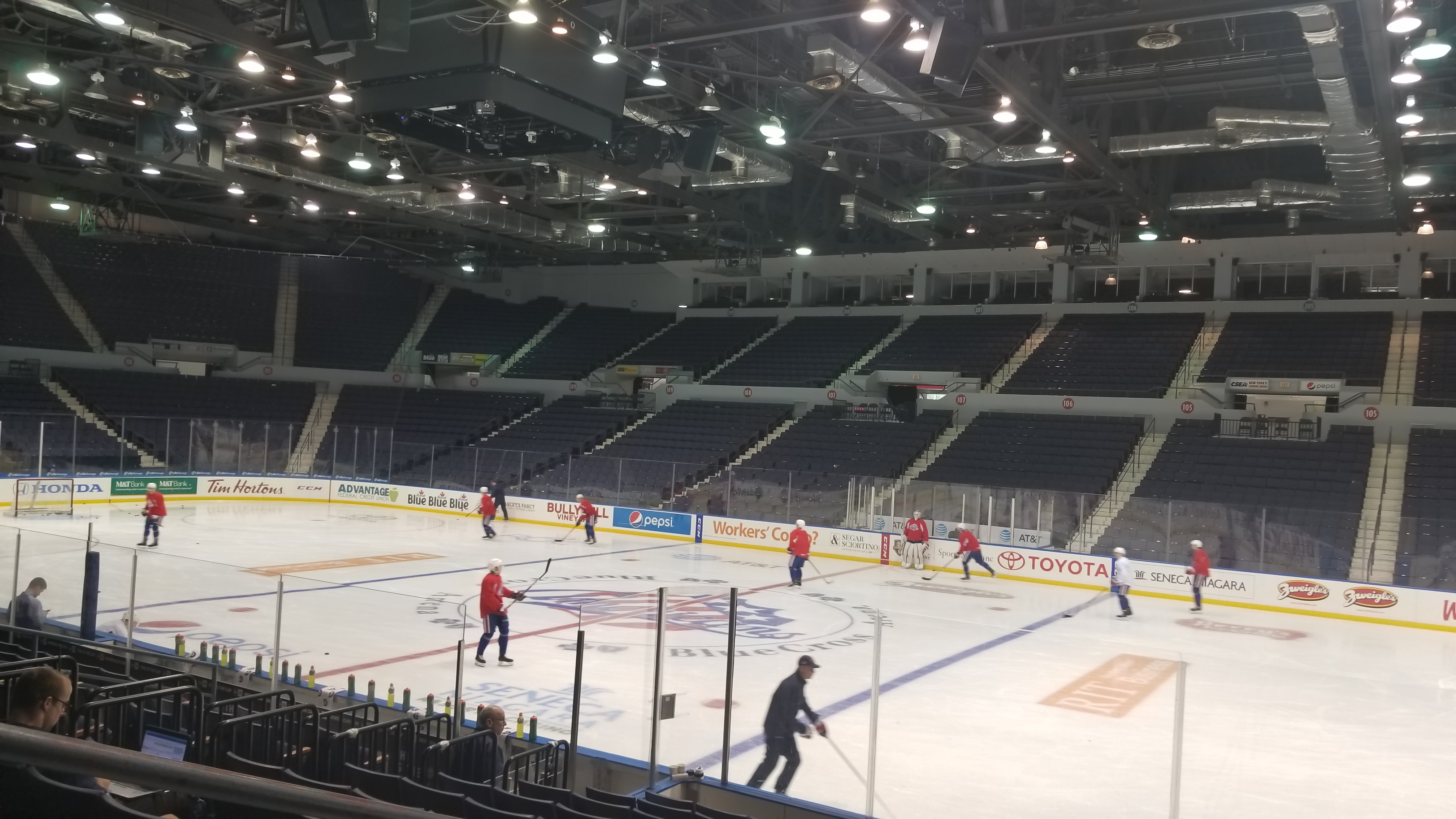 Welcome to the last weekend of October where the Rochester Americans have a chance to end the month in first place and extend their point streak (and start a new winning streak) against two divisional teams with back to back home games. The team split last weekend with a shootout win against Toronto and an overtime loss versus Belleville.

The weekend starts tonight against Utica in a game that will feature the American Leagues top three scorers in Victor Olofsson (5G+9A), Reid Boucher (9G+3A) and Zach Redmond (4G+8A). Lawrence Pilut (2G+8A) is in the top 10 of the league as well tied with six others at 10 points.

Rochester skated all over Utica last week with four power play goals in a 6-1 win. Zach Redmond and Victor Olofsson had two goals each. The Amerks power play is ranked first overall at 35.3%. It’s a safe assumption that Utica will do everything they can to avoid the penalty box tonight. Penalty killing is a different story with Rochester ranked 2nd to last overall.

“I didn’t know that, don’t look at that stat,” Taylor said when asked about the league leading power play. “We’ve scored some goals at timely times. That’s the thing for us, we want to make sure we’re scoring at the right time on those power plays.”

The penalty kill is a work in progress and they know they need to be better. Taylor said that special teams are handled by himself, Gord Dineen and Toby Petersen. It’s not just one person running the PP or PK and having to figure it out on his own.

“It’s really important, especially early on in the year,” Eric Cornel said after practice talking about needing divisional wins. “These are the games that add up as the season goes on so we’re going to look to come out hard tonight.”

Tonight is the second of five games between Rochester and Utica in the first half of the season. Justin Bailey talked this morning about rivalries saying, “any time in your division, any team you see six, seven, eight, nine, ten times during the year you become very sick of the guys on the other team as the year goes on. Any team that’s in our division is a big rival and with Utica how much we play them in the first half things will get a little chippy and those are fun games to play in.”

Bailey is still looking for his first goal of the season but with the team winning the pressure hasn’t been on him. Chris Taylor said he thinks that Bailey has gotten chances but also thinks he needs to shoot the puck more.

Even though this is their first seasons in North America playing professional hockey it’s worth noting that Olofsson (200 SHL games) and Pilut (191 SHL games) are not considered rookies due to the number of games they’ve played in Sweden. Pilut is expected back in the lineup tonight after missing two games with an upper body injury.

Early season success and a healthy team in Buffalo has adjusted the conversation compared to previous seasons. The Amerks have dealt with injuries early in the season but with the depth available and new players like Olofsson and Pilut producing it hasn’t been felt like it would have in years past. Through the first month of the season the only roster move was Matt Tennyson being sent to Rochester because of a healthy defense in Buffalo.

“If they’re winning we have to make sure we’re wining and being even better,” Chris Taylor said after practice this morning. “The old saying if he rides a bike for a half hour and he’s playing in the NHL well then you should ride at least 45 mins to an hour. You have to do that much more to try and take their spot or get up there.

Internal competition and internal pressure are two phrases that have been talked about since Jason Botterill took over management of the organization and for the first time we might really be seeing it pay off.

Taylor said, “It’s good, that’s internal pressure. Doesn’t have to be just on our team, it’s within the organization. If they’re doing well it makes our guys keep playing well, it keeps them striving to be better and push those guys up.”

Last week when the Sabres lost two in a row there was immediate questions about whether or now players like Olofsson, Pilut and Nylander were needed to force a change. Three wins later and no one wants to touch the lineup. Is the success of Olofsson and Pilut in the back of the minds of some players in Buffalo? Possibly. I asked Taylor and he said, “for sure they see it. I’m sure Olofssons name is plastered all over the news up there, same with Alex and Guhle. That’s what we want, we want that type of news of someone coming up from behind underneath you because keeps you going and that keeps the internal pressure going.”

It’s only October but this certainly a new way of talking about things within the organization and that’s a great thing for players and fans.

Rochester is home on Friday night vs Utica and Saturday night vs Laval. Puck drops at 7:05pm both nights.