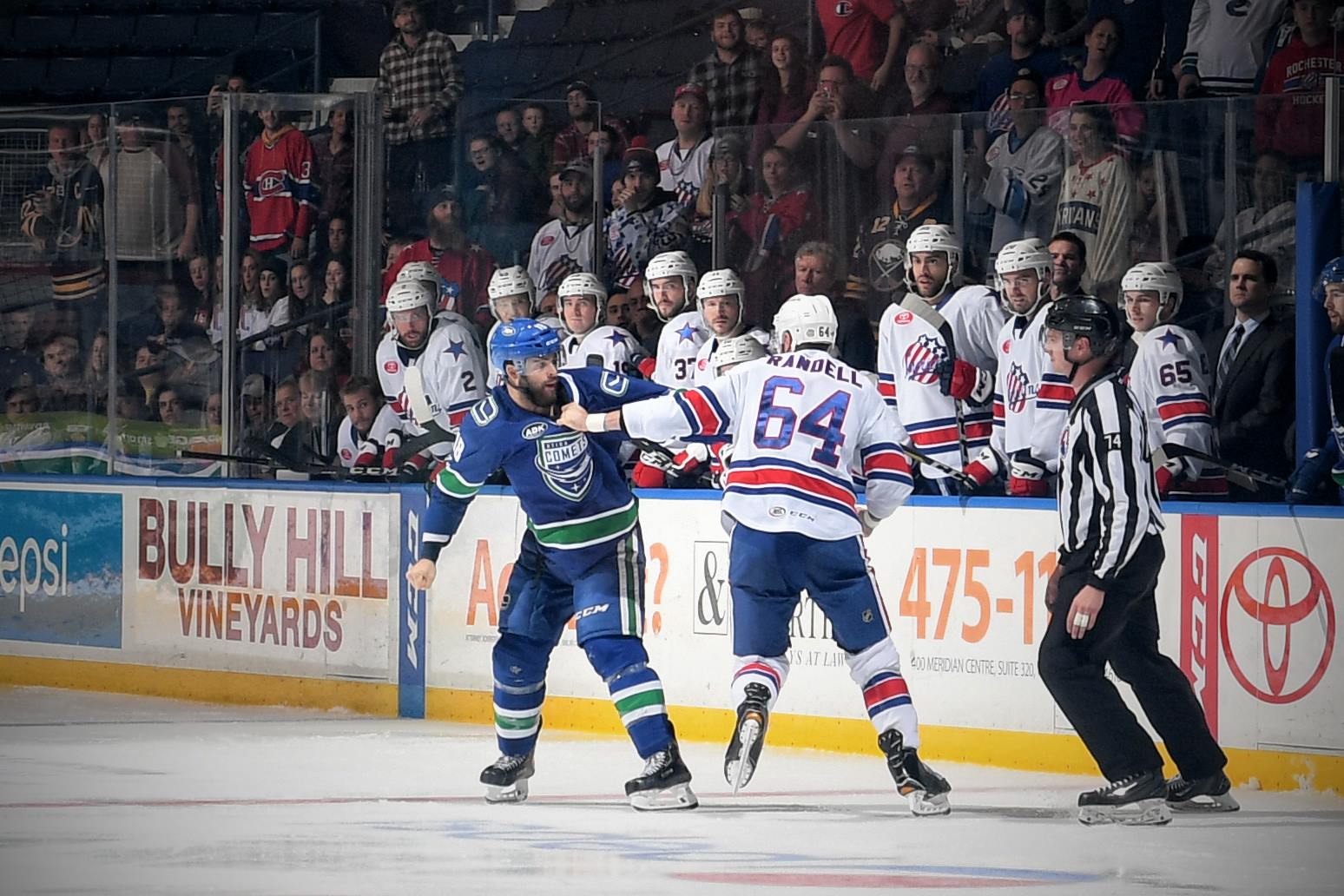 The Rochester Americans started the season being known as a tough team to play against and after smoking the Comets out of the building in the ninth game of the season they may be at that point. In five of the six wins this season Rochester has lit up the scoreboard with four or more goals and the team has a league high 13 power play goals.

“We took a step and we’re on a hot streak,” Scott Wedgewood said after the game talking about the team play. “We’re winning games, we’re getting points so that’s the most important thing but there’s always room to grow.”

Smoked, hot, lit up.. couldn’t resist. In the second period of the game there was a grease fire at the Court St grill that filled the end of the arena with smoke, The fire department showed up and setup giant fans to ventilate the building. Scott Wedgewood joked that he could smell it and was hungry during the game.

Wedgewood earned his fourth win and first shutout of the season after starting the season with back to back losses. One of the things he talked about after the game was the team blocking shots in front of him and the penalty kill unit. He said, “That’s huge as a team, it’s build confidence around and I trust them a lot more.”

You would think the team would be ecstatic after a 4-0 win on home ice, six wins in the last seven games, league leading power play and the three leading scorers in the league but that wasn’t the tone in the locker room after.

Zach Redmond said, “I think we’re playing well but kind of the funny thing is I think we can play a lot better which is exciting. There’s a lot of areas we can clean up. I’ve played on some pretty good teams but this one might be the best so far. You have a good mix of kind of older guys and some very good younger guys and everyone seems to have their role. I won’t jinx it but things are heading in the right direction and it’s exciting.”

Zach Redmond scored a power play goal halfway through the first. Kevin Porter scored with some luck early in the second period and then the penalty kill unity changed the momentum of the game in favor of Rochester.

In the first half of the second period Justin Bailey was called for holding and less than a minute later Zach Redmond joined him for a delay of game call. Kyle Criscuolo, Will Borgen and Andrew MacWilliam were key to killing off the five on three portion that last for 45 seconds with blocked shots. One of those blocked shots took Criscuolo out for the rest of the game, no further update has been provided yet.

“To kill off that 5 on 3 and our hear crowd come alive after that I think helped us momentum wise,” Zach Redmond.

Chris Taylor talked about details such as blocked shots saying, “those are the things that our guys remember in the dressing room how we won the game tonight. It’s not by the goals scored here, the power play, this that, it’s the blocked shots, the caring about each other and that’s why Wedgewood got a shutout. He made some big saves for us but also our other guys stepped up in front of him and made some huge blocks, scarified their own bodies.”

Tyler Randell dropped the gloves against Vincent Arseneau for a pretty good fight that helped lift the team as well. He had taken a run at Pilut during the game and Randell was to send a message that things like that wouldn’t be allowed. There hasn’t been a need for that yet this season but Randell was brought in by Randy Sexton for that purpose.

Lawrence Pilut had another big night with three assists. He credited the forwards for doing a lot of the work, he just had some puck luck. Pilut added, “We’re all working hard, working together really good as a group. We’re having fun together and that’s what it’s all about. I think we also strive to get better every game.”

After Rochester scored four power play goals last week one would think that Utica would know better than to leave Zach Redmond, Victor Olofsson and Lawrence Pilut with a lot of room around the perimeter but they seemed to forget. At 10:40 of the first period Zach Redmond scored his fifth goal of the season (all on the power play). Fans were yelling to shoot but they knew what they were doing cycling the puck to get the right opportunity.

The most lethal PP trio in @TheAHL. Redmond’s 5th goal of the season, all on the power play. pic.twitter.com/mRZjf0z9ZM

Kevin Porter scored his second goal of the season off a fluke play following a face off. Pilut was jokingly asked if this was a planned play. He said with a laugh, “yea exactly. Just how we drew it out.”

Kevin Porter puts the #Amerks up 2-0!! And the goal horn is working. pic.twitter.com/vVatnty9Mf

As the teams battled it out through the second period the rest of the arena had a smoke filled experience near the Court St end of the building. There was a small grease fire that filled the balcony with smoke. Credit to whoever was controlling the music inserting some smoke themed songs.

Someone burned some food at the Court St grill. Amazing the fire alarm hasn’t gone off. pic.twitter.com/BPmqIFmyeN

As smoke on the water plays over the PA. Exciting night in the old barn! pic.twitter.com/8gWgYLDbL1

Danny O’Regan scored his fifth of the season redirecting a Will Borgen shot from the point.

Alex Nylander was credited with an unassisted goal after Jesse Graham poked the puck into his own net. There was a delayed penalty waiting to be called against Utica as Nylander took off down the ice. One can only assume that Graham thought the play would be called dead after he touched the puck, fortunately for Rochester it went into the net.

Utica scores on themselves! Nylander gets credit and the #Amerks are up 4-0. pic.twitter.com/qylZOFNgNL

That was more than enough to win the game. Rochester is home again Saturday night vs Laval!