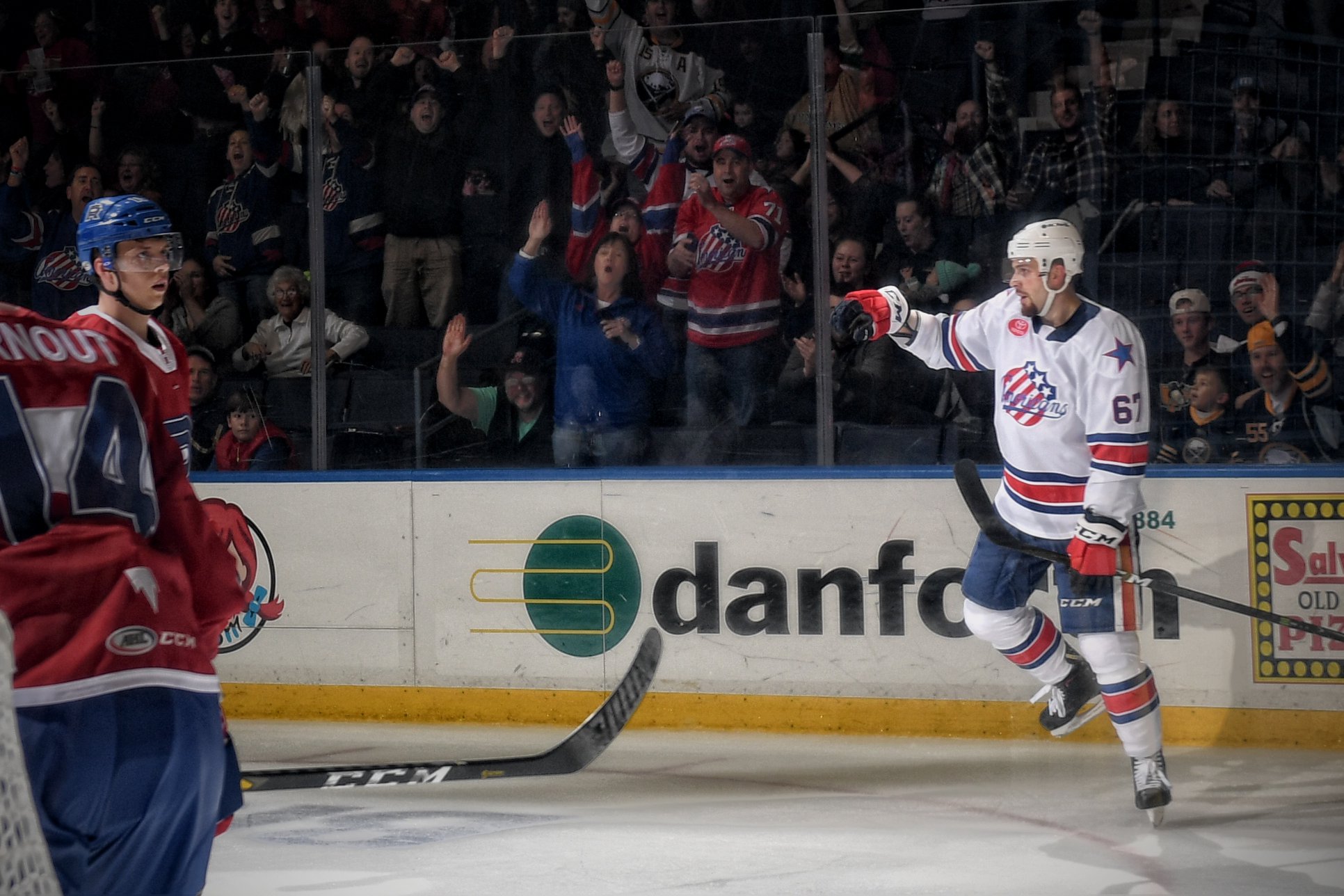 After the game on Saturday night there should be two teams that aren’t happy with the way things turned out. Laval had 12 power play opportunities and had an advantage of 39-25 in shots but it wasn’t enough to keep the Rochester Americans from winning. An unlikely goal from Yannick Veilleux and another solid performance in net from Scott Wedgewood carried the Amerks to a win. A win is a win but there’s no way a team can be happy giving up 12 power play opportunities.

“I don’t really want to comment on all the penalties but it happens,” Chris Taylor said after the game. “We fought through and got the two points.”

Laval scored a power play goal with 5:43 left in the second period that probably wouldn’t have counted if there was video review. Brett Kulak took a shot from the point as Byron Froese was going across the front of the net. The puck found it’s way into the net and Scott Wedgewood immediately turned to the ref to dispute the call.

“It’s tough without video review, it’s tough in the moment, but sometimes it’s hard for them to make the decision and get yelled at or the other way around,” Scott Wedgewood when asked about the goal. “I understand that but it’s also goals against and situations for us to put us behind the eight ball.”

“I looked at it after the second and he (the ref) told me the contact on my stick was prior to the puck going in. We slowed it down and the puck hadn’t even crossed the hash mark before my stick was in that guys legs.”

Laval controlled the pace of play through the first 40 minutes of the game but with only one goal on the scoreboard it provided Rochester an opportunity to get back into the game.

Chris Taylor didn’t have to say much after the second period, “I thought the guys knew how they were playing and by their self assessment I think you could tell.Â They came out better in the third and just took obviously too many penalties.” The message from the leadership was simple, bear down for 20 minutes and they did.

A perfect pass from Taylor Fedun to Zach Redmond the game at 8:02 of the third period. CJ Smith followed that up with a short handed goal 75 seconds later to give Rochester a lead and chance in the game.

In a rare moment the Amerks weren’t killing a penalty the fourth line put on the pressure in the offensive zone and Yannick Veilleux capitalized and scored what would turn out to be the game winning goal. Myles Powell didn’t touch the puck but his physical play along the boards allowed Dalton Smith to take a shot and Veilleux buried the rebound.

“I haven’t had any of those bounces in a while so it felt pretty good to get that monkey off my back,” Veilleux said. “Good teams find ways to win and that’s what we did tonight. I think that’s what we’ve been doing since the third game of the year.”

Laval scored again with 2:54 left but it was too little too late. A winning weekend for Rochester thanks to a successful penalty kill.

“We got a lot of guys eating pucks, even on the five on four when Bailey took one in the head and got right back up, it’s a tough job,” Wedgewood said when asked about the work in front of him. He added, “I was just joking with Bailey that now he knows what it feels like when he does it to me in practice.”

Eating pucks had the team banged up after Friday night. Kyle Criscuolo, Matt Tennyson and Tyler Randell are listed as lower body injuries.

“We came out flat and he held us in there,” Kevin Porter said when asked about goalie Scott Wedgewood. “Could’ve been three or four to nothing in the first and we came out zero zero. He’s been awesome.” Ignore the opening weekend of the season and Wedgewood has been perfect winning five straight starts.

Rochester took 29 penalty minutes and had 39 shots against but they still found a way to win.