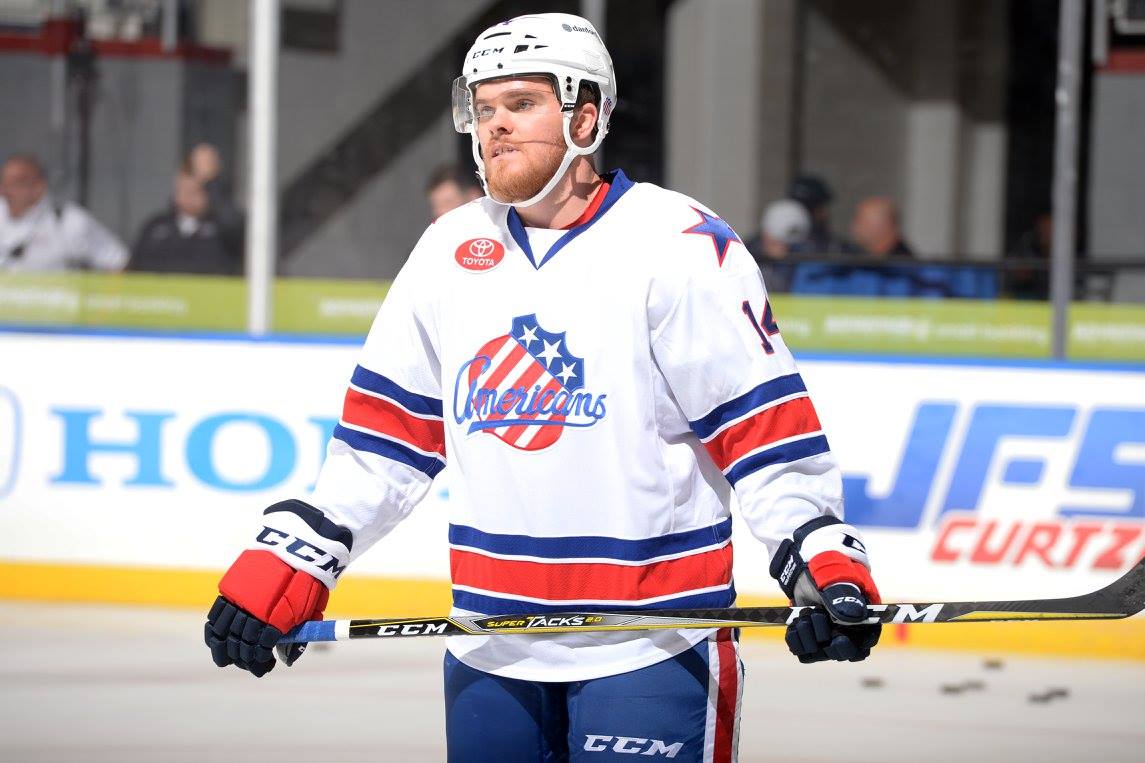 The Rochester Americans are off to a great start this season at the top of their division, near the top of the league and currently tied for the league lead in goals scored. They also have three of the top five scorers in the league. This has all been without one of their most valuable centers last season in Sean Malone who will be returning to the lineup tonight.

Malone hurt his knee in a preseason game with Buffalo against Columbus on September 17th and has been out of the lineup since then missing the first 13 games of the season. He has been in Rochester rehabbing his knee and returned to Amerks practice last week. The Buffalo Sabres officially assigned him to Rochester on Tuesday afternoon.

“It was really tough, obviously you want to be out there competing with your teammates,” Malone said this morning about being out of the lineup. “Something you work all summer and then coming up short and having to sit out another six weeks itâ€™s not fun but Iâ€™m looking forward to getting back to playing and competing again.”

Last season Malone missed the first three games of the season waiting for his chance to get into the lineup but followed that up by playing the next 76 games straight (73 regular season + 3 playoff games). He had 22 points (12G+10A) in 73 regular season games and 2A in three playoff games.

He had a slow start last season but as time went on he improved, had more playing time and was relied on at important points in a game. Whether it was an important face off, penalty kill or the last minute of a game when they had to shut down an opposing team it was Malone that was sent to the ice to get the job done.

Assistant coach Toby Petersen talked about Malone and what he brings saying, “He brings some stability. Mugsy is great on draws, great in the d-zone and he can play any position. He can move up and down the lineup, brings a lot of energy and is one of our most reliable players.”

When asked what Malone brings to the lineup Kevin Porter said, “He works hard, is a good two way forward, definitely takes care of his own end first and then can contribute offensively so heâ€™s a great all around player.

At the end of last season during locker clean out I had asked Malone about what he’d like to improve about his game and he said, “In terms of my game Iâ€™d like produce more offensively. I think I can take on more of an offensive role and think I have that ability. I have the confidence in myself to do it and want to have a good training camp to start off next year.”

I asked Malone if he still wanted to take on more of a scoring role and he said, “Itâ€™s a situation most guys want to be in but no matter where I am in the lineup Iâ€™m willing play whatever role is given to me and I want to excel at things that separate me from other players to get that opportunity at the next level.”

Sean Malone is from West Seneca so the game has some extra meaning for him, especially for it being his first game of the season. “To go back there and play in front of friends and family is really special and always a unique experience for me. Hopefully we can have a really good game tonight and show them how our team is doing.”

“I just think it comes down to preparation,” Malone said on what it’ll take to win tonight. “It’s a short bus ride but I think guys understand that we’re over 10 games in now and we should be having good starts and ready to play. I’m hoping personally to do that myself and have a good first couple of shifts.”

The game tonight is at KeyBank Center in Buffalo, puck drops at 7:05pm. Tickets are $10 to $20 depending on seat location via Tickets.com. The game will also be streamed live on AHLTV.