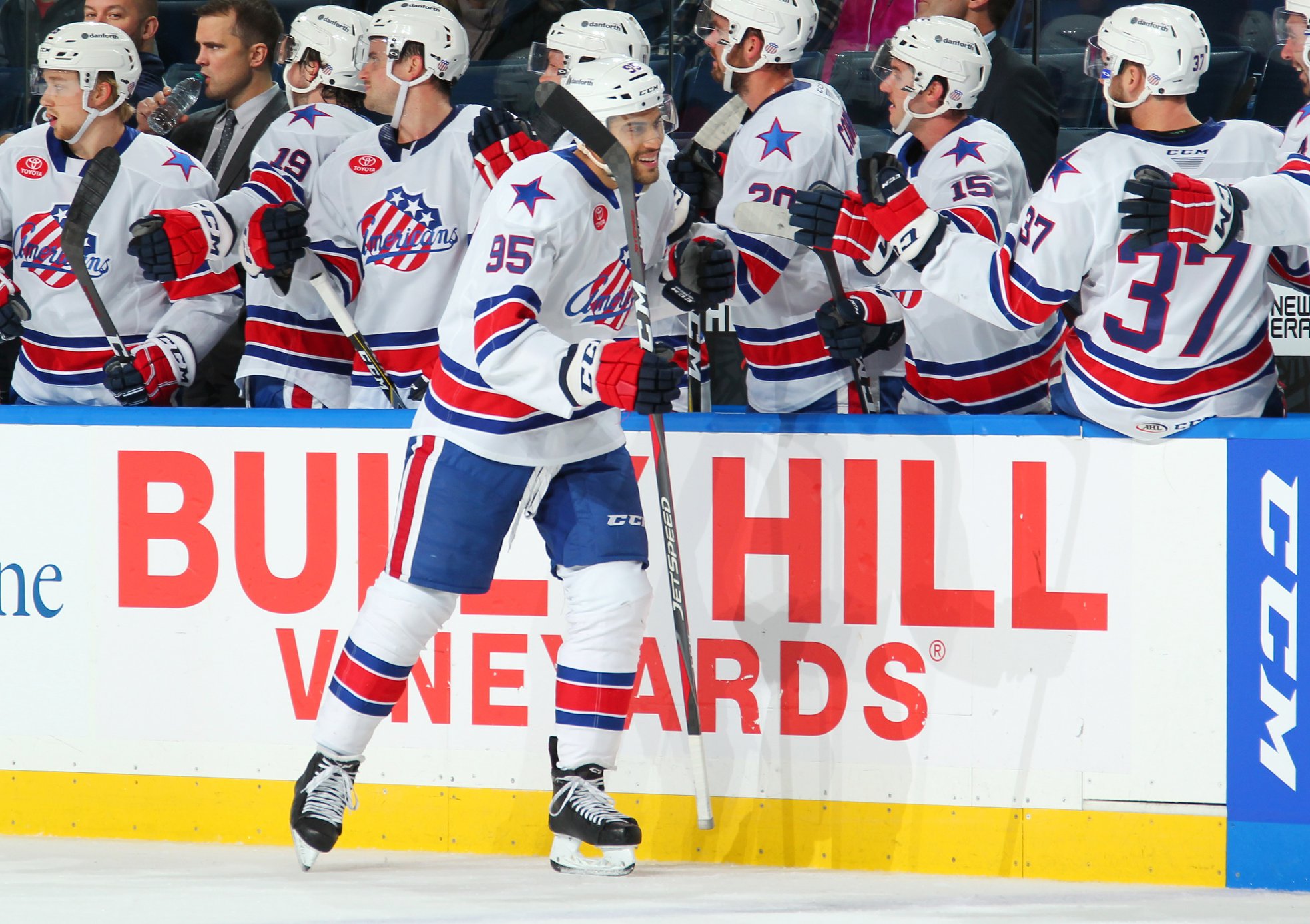 The Rochester Americans played one of their best team games in a dominating 5-2 win on Thursday night in Buffalo in a battle for first place. Heading into the night the Cleveland Monsters were two points behind the Amerks in the standings making it a four point game. The Amerks now have a four point lead on Cleveland and an eight point lead over fourth place Laval.

After the game Sean Malone said, “It was a battle for first place and I think we handled it really well. Good teams tend to come up big in these situations and I was just happy with the way we played tonight.”

One of the many things that is behind the early season success of this team is the ability to roll four successful lines. It’s important to look at the details, not just the goals, assists and point totals.

“I think that’s what we’re capable of doing, that can be our identity,” Wayne Simpson said after the game. “I think it was our best performance of the season.”

“It was a great win,” Chris Taylor said post game. “One of our best 60 minute games we played this year. I really liked every part of it, our goaltender, our defense and our forwards.”

Through the majority of the first period it was a back and forth game with the Amerks leading the play until Cleveland fired a number of shots on a power play opportunity.

Sean Malone had a hand in his first game back that setup the rush for Justin Bailey to score his first goal of the season. Malone won the face off to the right of Scott Wedgewood in the Amerks zone, Taylor Fedun sent a 30 yard pass to Justin Bailey who was leaving the zone and he took off down the ice and fired a shot over the left shoulder ofÂ Jean-Francois Berube.

Zach Redmond scored his team leading 8th goal of the season just 67 seconds later and four other players deserved assists on the play. Alex Nylander has been known to carry the puck into the zone, dump it into the corner and see where things unfold from there. This time he took a look around, pinched the puck against the boards and waited for reinforcements to arrive. Andrew Oglevie quickly entered the play and helped free the puck to where Eric Cornel battled for possession. The puck was sent up the side boards where Dalton Smith was able to tip it into open ice where Zach Redmond was waiting to fire a shot. Credit back to Cornel who was in front of the net and setup a screen. Those little details are what has this Amerks team showing a lot of potential.

Justin Bailey used his speed again for his second goal of the night and second of the season. The play started when Malone won the face off and tied his player up. That allowed Justin Bailey to get into the play when the puck was sent deep into the Amerks zone. Andrew MacWilliam sent the puck up the boards, Nylander chipped it into the neutral zone and Bailey took off down the ice.

Take the good with the bad. Cleveland scored their first goal of the game 23 seconds later when Nylander turned the puck over behind the goal line in the Amerks zone to Sonny Milano. Nathan Gerbe took a shot, the rebound went to Milano who shot the puck at the back end of Wedgewood and the puck went in the net.

“Let’s be honest, Alex didn’t make a play on the one goal,” Chris Taylor said post game when talking about mistakes that can be made. “We put him right back out there and he makes a good play. That’s learning and what we need to get out of these guys.”

Rochester took a 4-1 lead off a goal from Wayne Simpson for his first of two goals in the game. Zach Redmond passed the puck up ice to Simpson who tipped it into the Monsters zone. Both Simpson and CJ Smith chased the puck down behind the goal line. CJ Smith carried the puck around the puck of the net, sent a pass to Simpson across the goal mouth for a one timer. Redmond didn’t get a point on the play but the speed at which he sent the puck out of the defensive zone helped setup the scoring play.

Wayne Simpson scored again just over two minutes later with a quick shot from the face off circle and found a spot on the far side top corner of the net. Taylor Fedun and Lawrence Pilut showed patience with the puck in the defensive zone waiting for the forwards to get into position and as they did Pilut cleared the puck up to Simpson who took off. Eric Cornel had credit for an assist on the score sheet but wasn’t on the ice.

“He just does everything well. He’s sneaky good. He kind of flies under the radar a little and then wow, he has a breakaway or he has a great shot,” Chris Taylor said when talking about Simpson. “He’s a proven goal scorer in this league so it’s not like we got him out of nowhere.”

Former Sabres forward Nathan Gerbe scored with 32 seconds left off of an odd redirect off Kevin Porters stick. Gerbe was attempting to put the puck on net to a teammate crashing the net and instead it went off the blade of Porters stick.

Victor Olofsson didn’t play in the third period for what Chris Taylor described as a night to day related to lower body. There wasn’t anything noticeable in the second period that would’ve indicated a concern.

Scott Wedgewood earned his sixth win of the season with a 24 save performance. Take away the turnover that resulted in the goal off his back and the bounce off Porters stick and he has a shutout. He made quality saves at other important points of the game.

It was one of those games where everyone contributed in some way and the team was rewarded with a win. They held the league leading goal scorer Zac Dalpe off the scoreboard much like they did with Reid Boucher with Utica a couple of weeks ago.

“I can put any line out there at any time, that’s what I want to do, I want to play all four lines as much as I can and that’s what we’ve been doing lately.”

Rochester only has one game this weekend when they play at home, in Rochester, on Friday night against Syracuse at 7:05pm.

Here’s clips of the scoring:

That top corner has been a favorite for Amerks forwards recently. Justin Bailey picked his spot for his first goal of the season. pic.twitter.com/tXuRmR2MnE

Zach Redmond scored his 9th goal in only the 13th game of the season! Credit to Cornel creating some traffic in front of the net. pic.twitter.com/PSbxCq3wWw

2nd goal of the night for Justin Bailey and 2nd of the season! #Amerks up 3-0. pic.twitter.com/B9Mf9J99eI

Monsters came right back for their first of the game by Milano. Banked it off the side of Wedgewood. Amerks up 3-1. pic.twitter.com/QYmSDsMzBo

CJ Smith to Wayne Simpson and the Amerks are up 4-1! pic.twitter.com/iswslCFznB

Simpson scores his 2nd of the night to put the Amerks up 5-1. Dominating game at this point. pic.twitter.com/AFCz5u8eYq

The Monsters goal at the end of the 3rd went in off of Kevin Porter's stick. Thankfully we scored more than them. pic.twitter.com/HjFMDfcytB