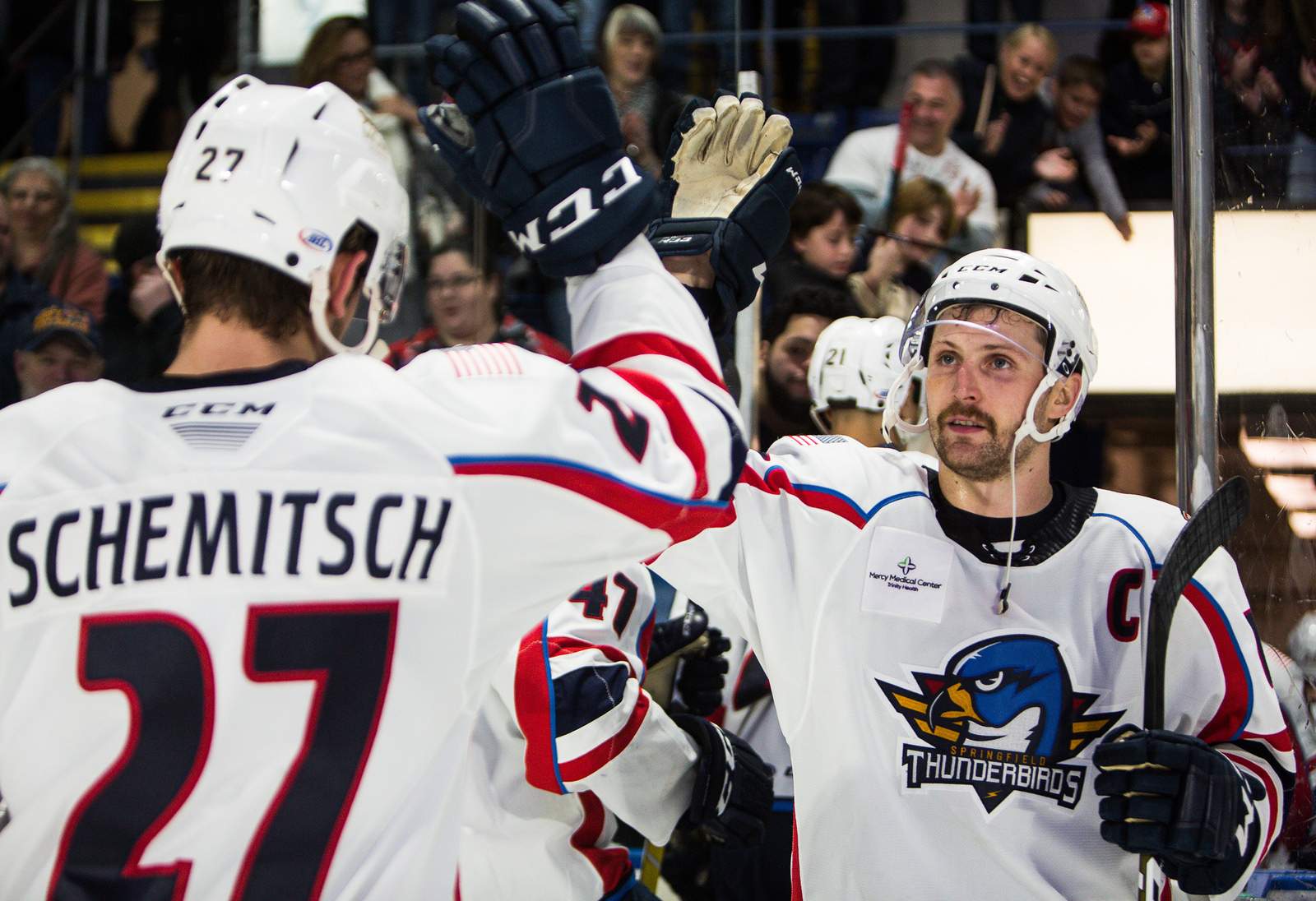 That was an embarrassing night in Springfield for the Rochester Americans. There’s no other way to say it. There was 20 minutes of the game on Friday night where it appeared as though it was going to be a competitive hockey game and then the second period arrived.

Scott Wedgewood got the start in net for Rochester but after four goals against was replaced by Adam Wilcox. Victor Olofsson was out for his second straight game and Kyle Criscuolo has now missed six straight. Both are considered lower body and day to day. Healthy scratches wereÂ Nathan Paetsch, Tyler Randell, Jack Dougherty, and Brandon Hickey.

The first period looked decent on both sides of the ice.

Kevin Porter opened the scoring at 7:03 of the first period with a goal from the hash marks of the face-off circle from a great lead pass by Lawrence Pilut. That was Porters fourth goal of the season and 16th assist of the season for Pilut.

Springfield tied the game at 15:46 of the first when Dryden Hunt scored after taking off out of the penalty box with a pass from Henrik Borgstrom and out skating Brendan Guhle down ice. Cover the guy coming out of the box and the period ends with a 1-0 lead.

The initial draft of this recap after the first period started off by talking about how the Amerks controlled the pace of play for the first 20 minutes of the game and things were looking alright after a week off.

CJ Smith scored his sixth of the season and power play goals by Zach Redmond and Alex Nylander gave the Amerks four goals on the night. A team scoring four goals including two on the power play can often be enough to win a game. Unless you give up nine to the opponent.

Jacob MacDonald scored that ninth goal of the night for Springfield at 13:19 of the third and the game was over.

Adam Wilcox lost his first game in regulation after allowing five goals against. This was also the first regulation road loss of the season for Rochester.

So, what happened? After painfully watching the second period over again it was a tale of two different teams. Springfield came out flying and the Amerks were scrambling. A combination of goaltending and defensive play by forwards and defenseman. Out of 18 skaters the only two that weren’t on the ice for a goal against were Danny O’Regan and Andrew Oglevie.

Springfield appears to be a pretty good hockey team early in the season. Every team will lose games here and there but very few will be embarrassed in a period like Rochester was on Friday night. Credit to Springfield for what they accomplished.

The Amerks play again Saturday night in Providence and Sunday afternoon in Hartford. Two wins can salvage the weekend but the second period is going to linger for a while.

Here’s all 13 in order goals as posted on Twitter in order. It’d be a waste of words to type out a recap of each one.

Another goal for Kevin Porter and another assist for Lawrence Pilut. #Amerks up 1-0 pic.twitter.com/4wZea1hvnx

Long pass to Dyden Hunt as he exits the penalty box and it's a 1-1 game. pic.twitter.com/w8q4674Tpk

Jacob MacDonald scores 70 seconds into the 2nd. Springfield is up 2-1. pic.twitter.com/EuI4HoQyS1

Asplund gets his first penalty of the season. Springfield scores again only 59 seconds after the last goal. This was reviewed and it counts. pic.twitter.com/QUuZ2O4k6E

Again. Three goals against in the first 3:01 of the 2nd. Springfield is up 4-1. Wedgewood is out, Wilcox is in. pic.twitter.com/7KW2gXaVRN

That's four goals against in less than 4 minutes this period. Springfield is up 5-1. pic.twitter.com/LfBmTeDCol

Another one. Five goals against in what, a 4 min 19 second span? Springfield is up 6-1. pic.twitter.com/e9JyhwfOyb

Dryden Hunt scores his 3rd of the game. Springfield is up 7-1. pic.twitter.com/wRXytj4HDf

Thompson scores to make it 8-1. pic.twitter.com/ocvfHJwI5N

The comeback has started!! CJ Smith scores his 6th of the season. The Amerks only need six more to tie it up. pic.twitter.com/0BSvwaRijw

11th goal of the season for Zach Redmond!!! Assists to Porter and Pilut. Only five goals needed to tie it up. pic.twitter.com/PWwDh8m7Fg

9th goal of the game for Springfield, this one on the power play. I don't think there's a chance anymore. pic.twitter.com/6swWTxsIwu