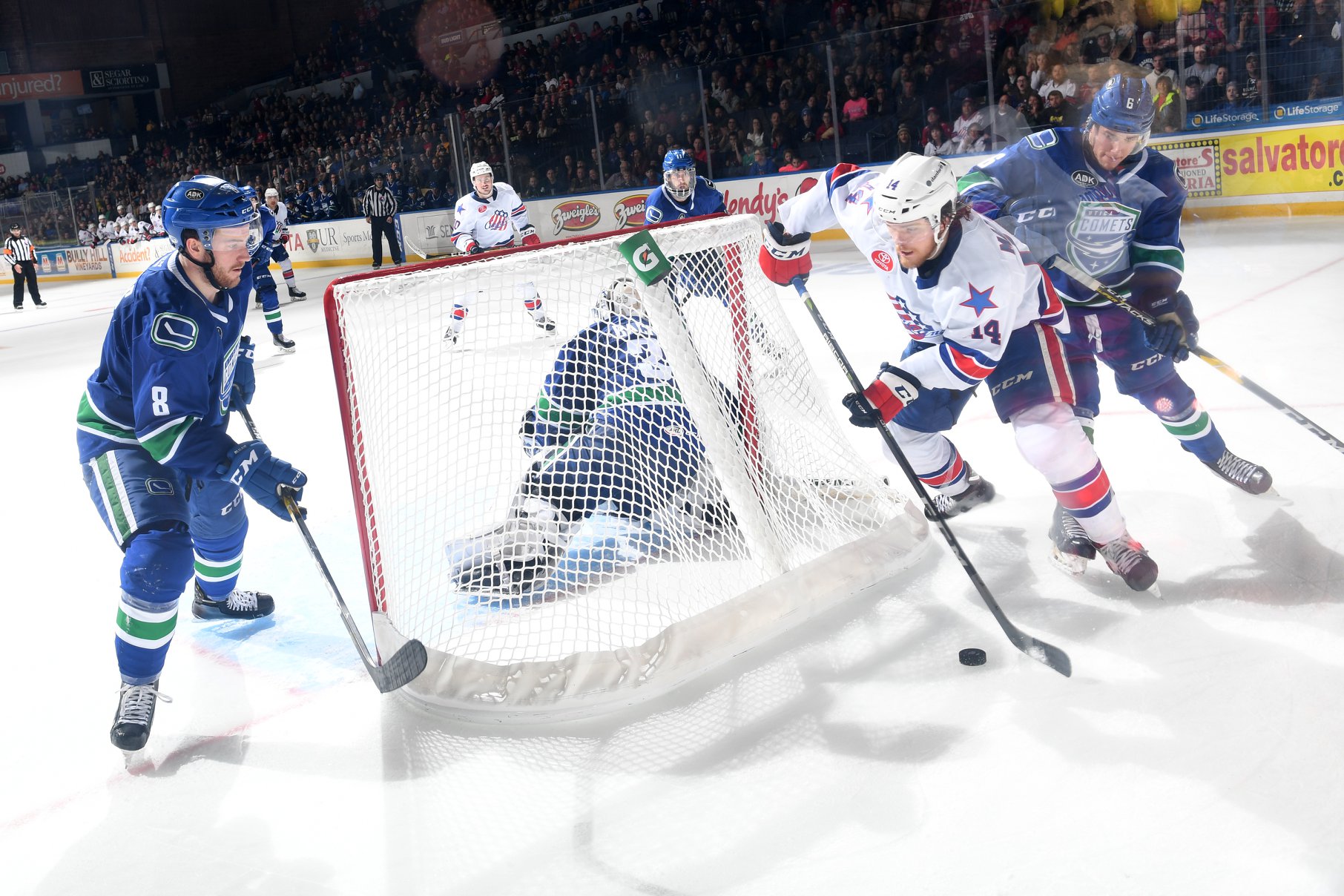 “Our team should never give up five goals and it’s concerning from last weekend to this weekend,” Chris Taylor said after the game. “We’re better than that and especially at home. The team that we had tonight I thought should have had five or six and gave up one or two maybe.”

Lawrence Pilut was assigned back to the Amerks following the Buffalo Sabres game on Friday evening. He made it back to Rochester in time to board the team bus to Binghamton for the game on Saturday night. The defenseman may have been a difference maker on Friday night but playing without him shouldn’t have been the reason they lost.

“He definitely makes a difference, he makes our team better and I’m not going to say he doesn’t,” Chris Taylor said following the loss. “We have guys and our depth and we should’ve been fine tonight. They’re going through a lot of injuries and a lot of call ups (Utica Comets). For me this is a very disappointing game, worst of the season.”

This statement follows last Fridays game when they were scored on seven times in the second period and lost 9-4.

Wayne Simpson and Danny O’Regan scored four minutes apart in the first period to give the Amerks a 2-1 lead but it wouldn’t last for long. An interference penalty served by Dalton Smith, Brendan Guhle is the one who committed the penalty, and then a slash by Jack Dougherty gave Utica a 5 on 3 advantage.

Zack MacEwen and Michael Carcone made use of the power play time and scored 26 seconds apart to give Utica a 3-2 lead.

There were 11 minor penalties called in the game. Six against Utica, five against Rochester. “You can blame the refs all you want but once they start early with the soft calls and how they’re going to call it all night you have to adapt and learn,” CJ Smith said. “We didn’t adapt, took too many penalties and it hurt us tonight.”

Jack Dougherty lobbed a puck on net from the blue line and it found its way past Richard Bachman to tie the game at three halfway through the second period.

Utica scored with 5.6 seconds remaining in the second period to take a 4-3 lead with a short handed goal. A misplayed face off in the Comets zone resulted in the puck heading the wrong direction and Michael Carcone scored his second goal of the game.

The real difference maker was at 2:44 early in the third period when Brendan Guhle made an attempt at a cross ice pass but it went off the tip of his stick and landed right in the slot to Cam Darcy who gave Utica the 5-3 lead.

Guhle with the Nathan Peterman like turnover. Utica is up 5-3. pic.twitter.com/CDgIJpogyy

Sean Malone scored his first goal of the season just over four minutes later to give the Amerks some hope but it wouldn’t be enough. They pulled Adam Wilcox for an extra attacker with 2:26 left in the period. They had more shots, more pressure, and more chances but ultimately couldn’t score.

After the game CJ Smith said, “We put up almost 50 shots (final tally was 47), scored four goals, should be able to find a way to win that kind of game. Maybe we got some bad bounces defensively, unlucky defensively but you have to work hard to make sure those bounces don’t go in.”

Victor Olofsson and Brendan Guhle had a team high six shots each in the game, none were memorable. The defense alone had a total of 23 of the combined 47 shots with only Dougherty finding the net.

In the post game interview Wayne Simpson said,Â “We just had these little stretches that weren’t good and it kind of let them get in the game. It’s disappointing to not put together a full effort. It was an important divisional game, we fought back hard, tried to even it up late but it just wasn’t good enough.”

The team doesn’t see themselves in a slide even after losing three out of four games. “Just little things that aren’t going our way and I think they’re fixable,” Wayne Simpson said.Â  “We can fix them fast. We have a good group and we’re not going to lose our confidence that quick.”

“We just have to bear down and try to play smarter hockey tomorrow night and from now on.”

They play Binghamton on Saturday night and left on a bus immediately following the loss on Friday night.

Rochester has enjoyed sitting in first place in the North Division but it may not be for long at this pace. Syracuse is on an 8-0-1-0 run right now and is only three points behind the Amerks in the standings with two games in hand.

We’ve seen what this team is capable of so there’s no reason to panic. Yet. But there’s reasons to be concerned. They’re trending in the wrong direction after a hot start to the season over the first 10 games.

The crowd on Friday night was the biggest of the season with 6,756 in attendance. It would have been a great chance to build some buzz around the team to join in the fun that the Buffalo Sabres have created. Instead people left with disappointment seeing a team play a messy game.

Here’s how all of the goal scoring unfolded:

Jack Dougherty scored his first of the season with a simple floater towards the net. There was hope with a 3-3 game. pic.twitter.com/eD3KtEMgmD

The turnover that hurt the most. Guhle attempts a pass that went off the end of his blade, Cam Darcy gave Utica a 5-3 lead. pic.twitter.com/nIA9nyMdPG

Honorable late play mention: Guhle and Olofsson swap places on the draw. O'Regan wins it to Dougherty, Olofsson breaks in catching a pass from Dougherty and gets a quick shot on net. pic.twitter.com/pfk2hzYUD4