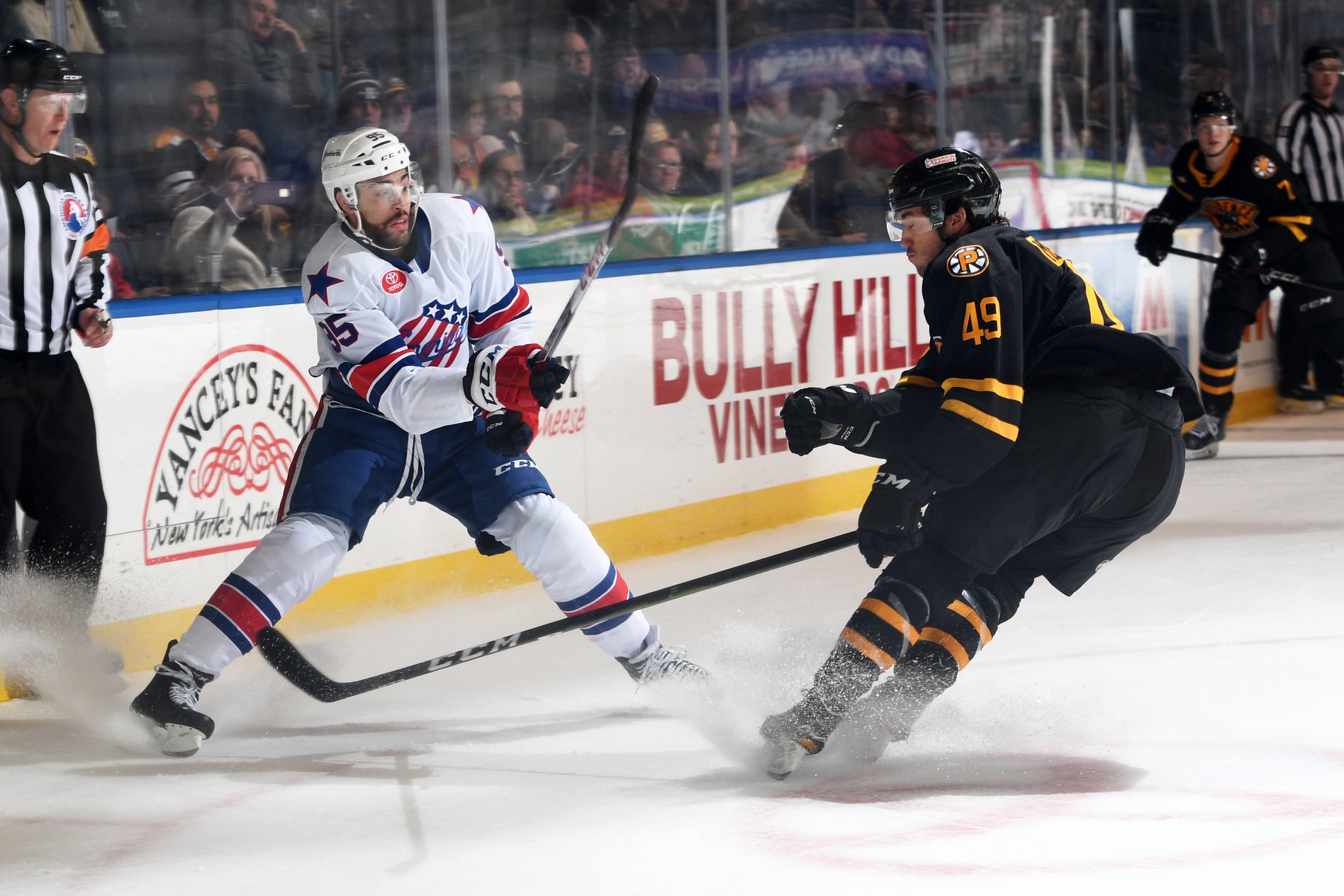 In the last two weeks the Rochester Americans have had two concerning losses but in that same span they’ve turned their game around and have won four of the last five and five of the last seven games. Two goals from Justin Bailey on Friday night along with the puck going off two posts in the last seconds helped the Amerks in the 2-1 win over Providence on Friday night.

The power play had struggled over the previous 13 games but the team turned their fortunes around on the first opportunity in the first period.

“We’re preaching getting back to the basics on the power play, just getting pucks to the net. When you have an extra guy good things can happen,” Justin Bailey said after the game.

Rasmus Asplund passed the puck to Brendan Guhle at the blue line, a quick wrist shot, save, and Justin Bailey put the rebound into the net off a back hand. That’s the type of play that was bringing them success early in the season but has gotten away from them.

Up until that goal the first period had a slow start with back and forth action before Rochester took control of the game.

Bailey scored his second of the night and seventh of the season intercepting a pass at the blue line, skating it in alone, and scoring off the back hand again. Rasmus Asplund and Alex Nylander had been battling for the puck along the boards. Providence forced a pass to the middle of the ice where Bailey intercepted it.

The line of Alex Nylander, Sean Malone, and Justin Bailey has been noticeable in recent games. Bailey acknowledged the skill of Nylander and the grit of Malone that has brought them success.

Jonas Johansson made the save of the game in the second period as Martin Bakos took a quick shot from the hash marks. Johansson slid across the crease, flung his glove and left pad high in the air to make the save. After the game Johansson said, “I just felt that I didn’t have enough body behind the puck so I just tried to get anything I had up there and it just hit me, I don’t know, pretty lucky. I think it hit my arm.”

“It was a big save, fun to watch, obviously we got caught there two on one but he made a big save for us,” Chris Taylor said about that save.

Providence had a power play with under three minutes to play in the second period but it was Rochester who controlled the two minute span. Justin Bailey had a rush but lost his footing. Wayne Simpson had a breakaway but was tripped up trying to get off a shot. CJ Smith was taken down on a shot attempt and then Rasmus Asplund shot the rebound wide.

Dalton Smith delivered a big hit to Jakub Zboril early in the third period that had sent Zboril to the locker room, I don’t think he returned to the game. Later in the period Austin Fyten challenged Dalton Smith at a face-off and Smith answered the call.

Amerks remained in control in the third period to the point where the Bruins didn’t get their first shot until there was under seven minutes to play. Zach Redmond took a roughing penalty with 4:30 left to play and the penalty kill came up big again.

Asked about getting better at defending one goal leads Chris Taylor said, “Sometimes I think we are and sometimes I don’t know.”

They held on, put the effort in, and consider it a learning experience for players like Brandon Hickey and Will Borgen having to step into those situations.

On Friday night some last second goal posts were the difference makers. Providence pulled their goalie and turned on the pressure. A shot off some posts and the buzzer going off before a puck went in proved to be a nail biter at the end of the game.

Here’s how it happened:

It's tough to see as it happens so fast but the save of Friday night to the goal posts and Johanssons back! Post, off the back of Johansson, post, out. Buzzer went off just in time. #Amerks won 2-1. pic.twitter.com/Qod394BUfT

With a smile Chris Taylor said, “We say goalies have good angles when they hit the posts so he had good angles on that one.”

It was a fast paced game where again Rochester stuck to their game plan with contributions from every shift. There was also a bit of luck in the game.

“Sometimes you get lucky, sometimes you get unlucky, and tonight was our night,” Johansson said after his second game of the season with the Amerks and second straight win.

Kevin Porter hit a Providence player half way through the third period and only had one shift after that. Chris Taylor called it lower body (looked like possible knee on knee) and they’d know more on Saturday regarding his status. Sean Malone also took a high stick and was thrown to the ice late in the third period. The status for both will be known around game time in Syracuse.

Adam Wilcox is expected to get the start against Syracuse.