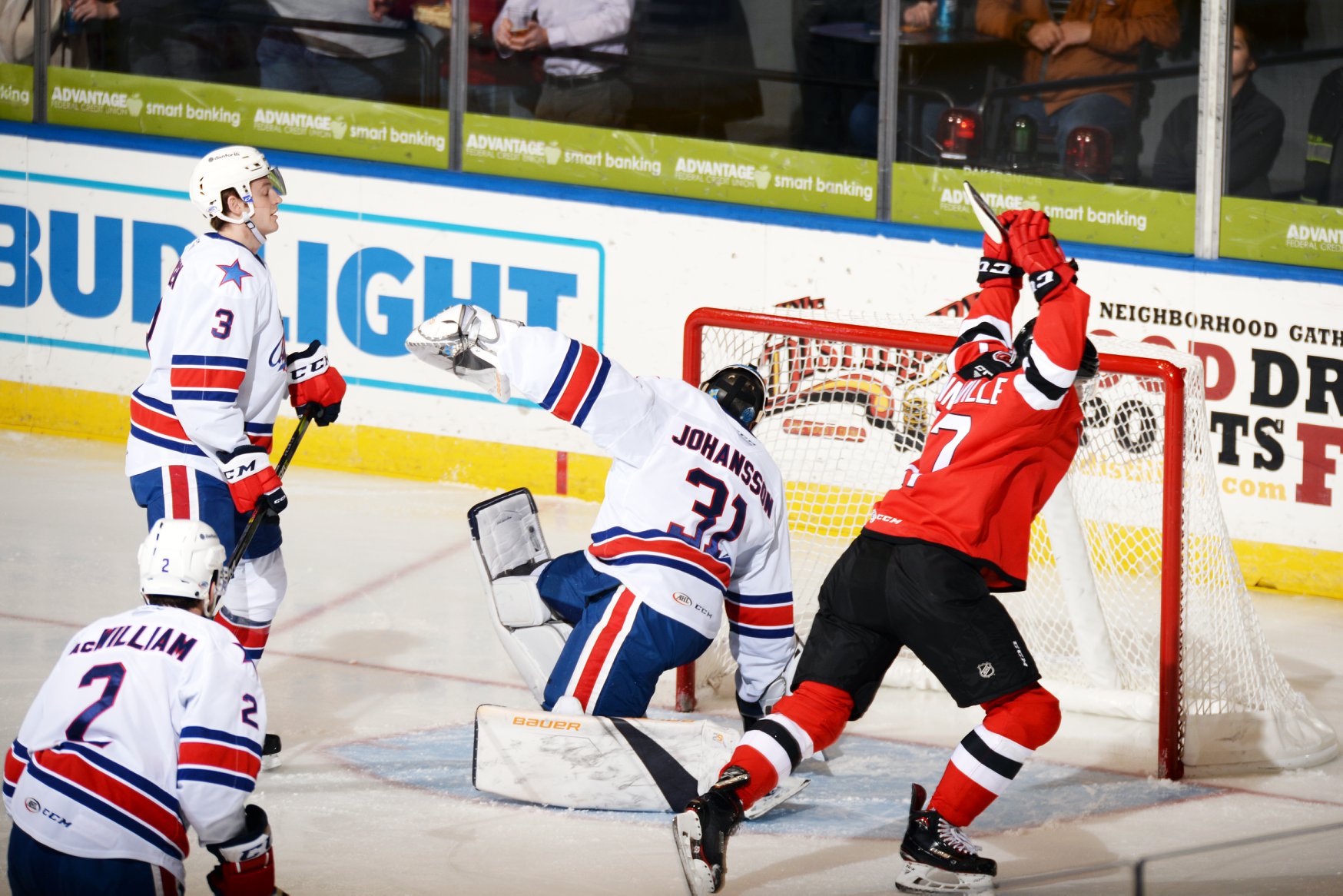 On Wednesday afternoon there was an article posted here about the Rochester Americans having a team meeting last week where they talked about getting back to playing the right way and being a better team. That all sounded great but those thoughts wereÂ  apparently sent down the Genesee River on Wednesday night before the game against the Binghamton Devils.

Turnovers, sloppy play, lack of energy, and barely anyone in the building to see it. That’s probably a good thing.

Binghamton ended the first period with a 2-0 lead off goals from John Quenneville andÂ Egor Sharangovich. The first goal was the result of Andrew MacWilliam and Sean Malone unable to gain possession of the puck in the corner.

Egor Sharangovich scored the Devils goal while short handed and unassisted on a play that Zach Redmond would love to have back. Redmond was moving the puck up the center of the ice at the hash marks in front of Johansson, Sharangovich pressured him, turnover, back of the net.

After the game Sean Malone was asked about the game and he said, “I think it’s pretty obvious we gave up two goals in the first and ultimately could’ve been prevented.”

Binghamton was able to finish on their chances, Rochester wasn’t. The period ended with the Amerks leading 16-8 in shots. Those 16 shots didn’t generate any second or third chances. They were also almost all straight on shots that Devils goalie Mackenzie Blackwood was able to keep an eye on.

A 32 second span within the first two minutes sealed the win for Binghamton and sent Jonas Johansson to the bench.

John Ramage put away a loose puck at the bottom of the face off circle as the Amerks looked around for it. Blake Pietila beat out Justin Bailey and Will Borgen along the wall as he went in and beat Johansson glove side.

Chris Taylor looked down to Adam Wilcox immediately after the goal and gave the head nod to send him into the game.

After the game Taylor said the decision to start Johansson was warranted based on how he had played last week. He also stated that Scott Wedgewood didn’t get a lot of practice time while called up with the Buffalo Sabres and they wanted to get Johansson back into another game.

I made a note in the second half of the second period stating that Myles Powell, Yannick Veilleux, and Tyler Randell skated as the best line.

Chris Taylor acknowledged that line as well after the game saying, “That was our best line tonight. They just worked hard, went after pucks, created a lot of opportunities, finished hits, and created turnovers.”

Matt Hunwick played in his first game of the season while down on a conditioning assignment and contributed to the Amerks lone goal. A quick reach in with his stick poked a puck out to Alex Nylander, he circled across the face off circles, perfect pass to Sean Malone who redirected the puck into the net.

Devils defenseman John Ramage forced another turnover at his own blue line as Danny O’Regan and Andrew MacWilliam attempted to enter the zone. The play quickly turned and Kurtis Gabriel scored his own goal glove side on Wilcox.

A season low attendance ofÂ 2772 (likely around half of that and then around 500 people left at the end of the game) stuck around to watch an uneventful third period.

The good news is that the Rochester Americans are still in first place and as they’ve shown all season they like to lose games like this in big ways and then bounce back. They were attempting to build off a three game winning streak but this game went in the opposite direction.

“I think we have really good leaders in this locker room that make sure we’re ready to go every night. Sometimes it’s just a couple of guys that aren’t going and that can effect the entire team,” Sean Malone said in the post game regarding the slow start. “We need to grind through those. Some nights you might not have your legs, you might not have it all. You have to play simple and make the right plays at the right time and try to impact the game in other ways.”

There’s still 51 games remaining in the regular season, it’s going to be an adventure. Back on home ice Friday night against Cleveland followed by a road game in Cleveland to finish out this week.

Here’s the goals as they happened:

Binghamton goes up 2-0. Unassisted and shorthanded. No other words are necessary. pic.twitter.com/4VM7u321bM

Amerks capitalize on a turnover and get on the board. Sean Malone from Alex Nylander and Matt Hunwick. Only down by 3! pic.twitter.com/yFi415tz4T

Turnover at the blue line and Kurtis Gabriel puts Binghamton up 5-1. That's 5 goals on 16 shots. 4 of those were on 10 shots against Johansson. pic.twitter.com/PS8B621R41