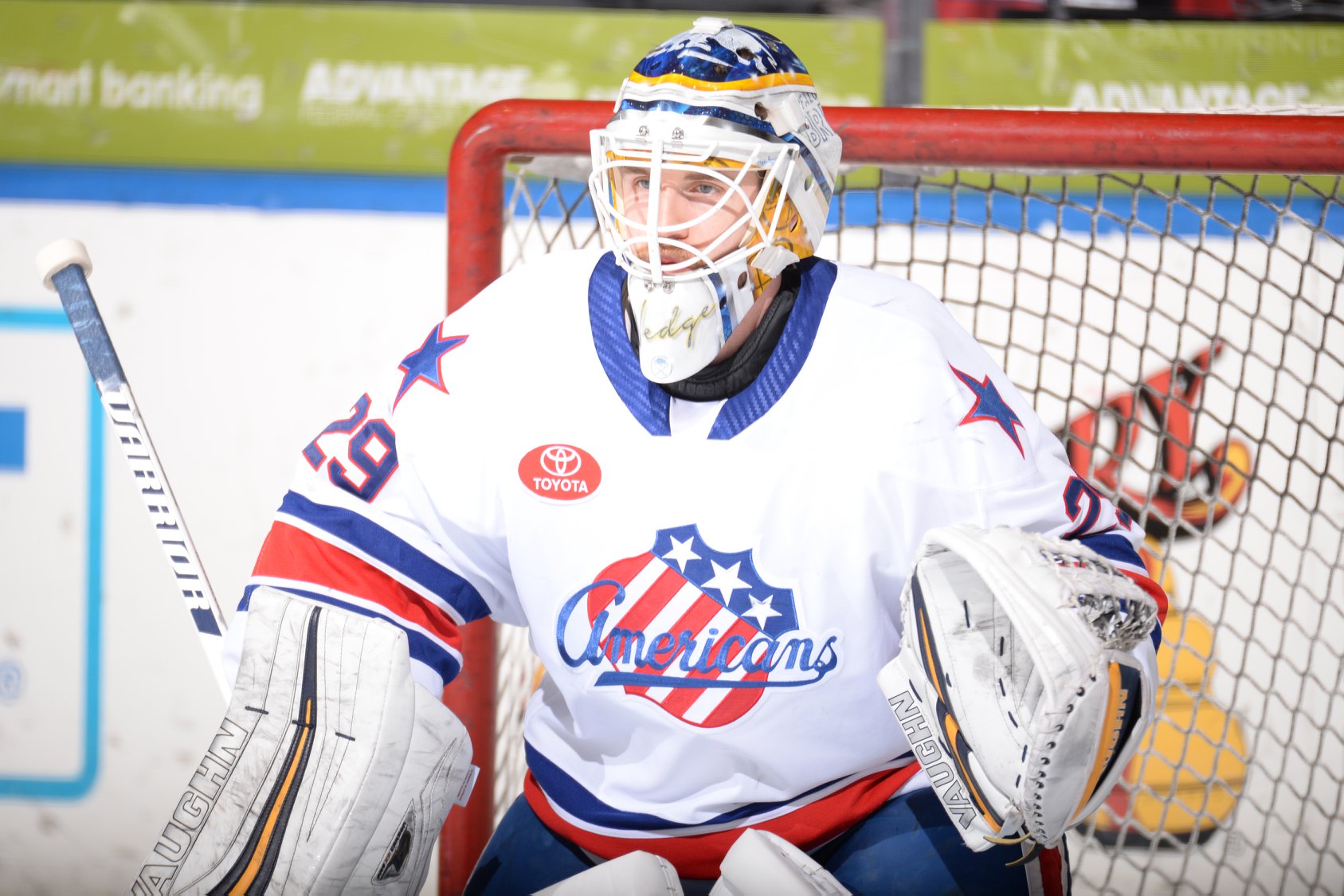 That game on Friday night was goalie Scott Wedgewood vs Cleveland Monsters with the goalie coming out on top. Wedgewood had 42 saves in his first game in almost two weeks to back stop the Amerks to a 3-1 win on home ice.

First period ended without a score but Cleveland had a 14-6 advantage in shots in the first 20 minutes. Amerks had an early power play 62 seconds into the game and they fired puck after puck that went wide or over the net hitting the glass. Cleveland took over as the first period went on controlling most of the play.

The lines were changed up in the second period with CJ Smith centering a line with Alex Nylander and Justin Bailey. It paid off at 2:29 of the second period when Alex Nylander scored his seventh goal of the season. Smith and Nylander both went for the puck behind the goal line, Smith poked it free, Justin Bailey took a shot off the pad of Berube and Nylander was there to score on the rebound.

Amerks had more chances in the second period with two different power play opportunities but had no success. Again.

Scott Wedgewood was great in the second period making a few big saves that would be considered excellent scoring chances. That continued into the third period whenÂ Cleveland controlled the first 17 minutes out playing, out shooting, and beating Rochester to every puck.

Talking about the save above Scott Wedgewood said, “Prayed on the groins there and found a way to cover it.”

Brendan Guhle owed Wedgewood a big thanks on that as well after getting beat.

Matt Hunwick attempted a long break out pass from inside the Amerks blue line that was intercepted by Monsters defenseman Dean Kukan. The play immediately rushed into the Amerks zone and Wedgewood made a quick pad save. Alex Nylander made a heads up play on the rebound to send the puck out of the zone. Pressure from CJ Smith and Justin Bailey lead the rush, a pass to Brandon Hickey who sent a low rocket shot into the net with 2:51 remaining in the game.

“I’m pretty calm in my net but I threw a fist bump out there,” Wedgewood said in reference to the goal by Hickey. “It’s fun when you’re winning and fun when guys make plays like that and bounce back for you.”

Cleveland pulled their goalie on the next sequence and Danny O’Regan scored an empty net goal 24 seconds after Hickey to give Rochester a 3-1 lead. Victor Olofsson was able to get to the puck on the boards and send it up ice to O’Regan.

A goalie has to steal a game and that’s exactly what Scott Wedgewood did for the Amerks on Friday night. His shutout bid was ruined by a power play goal from AdamÂ Clendening with 73 seconds left in the game but it was too little too late for the Monsters.

Outside of a few big hits from Dalton Smith and a one goal lead in the third period it never felt like a winning game until that empty netter by O’Regan. Good teams find a way to win and that’s what Rochester did. Their goalie was able to keep the game close and they were able to finish it off. You can’t play like that every night but a regulation win against a divisional team is big in the standings.

Here’s the goals as they happened:

Another view of the goal by Alex Nylander. Assists to Justin Bailey and CJ Smith. pic.twitter.com/vkEOIhb4AU

Brandon Hickey gives the Amerks a much needed 2-0 lead late in the 3rd! pic.twitter.com/ABVa5DZN2s

Danny O'Regan gets an empty netter for a 3-0 lead! pic.twitter.com/aHVF3woT3j