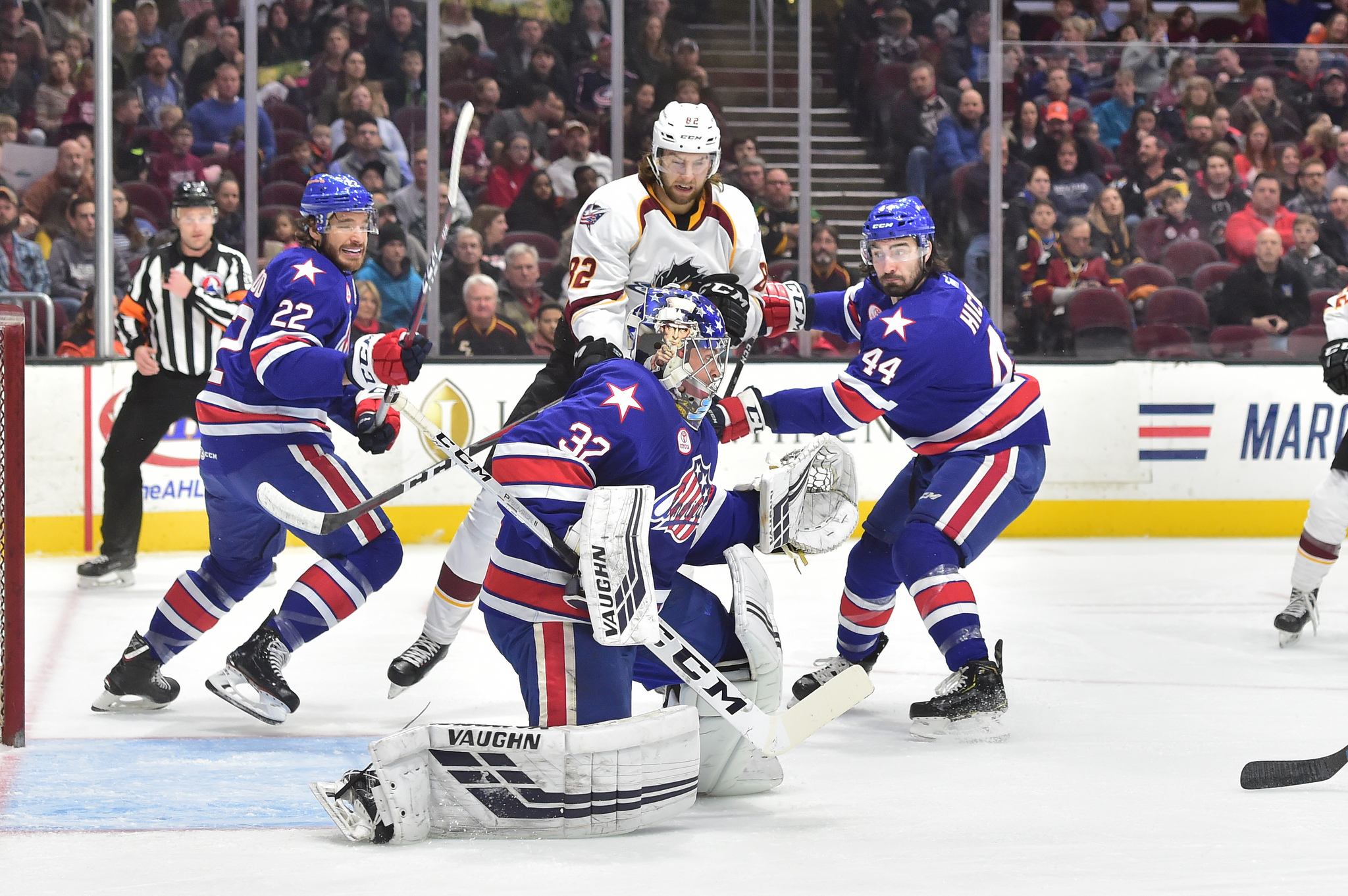 The wins aren’t always going to come in easy ways and when they aren’t you have to rely on goaltending and that’s what the Rochester Americans did for the second night in a row. Adam Wilcox made 30 saves in the 2-1 overtime winner on the road in Cleveland to end the weekend with back to back wins over the Monsters for the Amerks.

Scott Wedgewood was excellent in stealing a win for the Amerks in a 3-1 win with 42 saves on Friday night. Wilcox didn’t have to steal this win but he had to play strong with a close game in front of him and that’s what he did.

Brendan Guhle scored his third goal of the season, first on the power play, to give the Amerks a 1-0 lead at 17:12 of the second period. Zach Redmond had sent the puck around the boards, Wayne Simpson retrieved the puck, passed it to Guhle, and Guhle scored from the center of the ice at the top of the face off circle. That was Guhle’s first goal in 16 games.

Earlier in the game the first period was even with both teams having nine shots. Up until the goal scored by Guhle both teams had successful killed two penalties each. By the end of the second period the Amerks had a 24-16 advantage in shots.

The third period saw play intensify with a big scrum in the corner after Sonny Milano had taken a swipe at the glove of Adam Wilcox after a save. Dalton Smith, Andrew MacWilliam, Sean Malone, and Jack Dougherty immediately gathered in the corner to share their displeasure.

Nathan Gerbe had one of the games biggest scoring chances as he was all alone in front of Wilcox and tried to go between the legs off a shot/pass fromÂ Gabriel Carlsson. Wilcox didn’t bite on the move and made a blocker save.

CJ Smith attempted to clear the puck with 3:17 left in the third but the attempt went over the glass resulting in a delay of game penalty.

It only took six seconds into the power play for Nathan Gerbe to score and tie the game with a quick shot.

With 93 seconds left in regulation there was an attempt down low between Justin Bailey, Alex Nylander, and CJ Smith but they weren’t able to connect on the final pass.

Overtime saw both teams going back and forth with the shot that counted going to CJ Smith with 88 seconds left to play. Justin Bailey sent a perfect pass in front of a Monsters player to Danny O’Regan, O’Regan took a shot, the rebound went off the pads of goalieÂ Jean-Francois Berube to CJ Smith who was skating with his stick up and ready to release a shot.

Monsters starting goalieÂ Matiss Kivlenieks had to leave the game with less than a minute to play due to injury and had finished with 37 saves.

The games weren’t perfect for Rochester this weekend but they still finished the back to back games with two wins, four points to build a gap in the standings, and had great goaltending both nights.

Against those four teams in the North Division the Amerks maintain a winning record so far this season.

A day off before the team returns to practice in preparation for three home games this upcoming week. Wednesday vs Belleville, Friday and Saturday vs Hartford. Note that the Saturday home game starts at 5:05pm.

Game recap in gifs as they happened:

Unusual to see Andrew MacWilliam go down on a big hit. Ryan MacInnis sent him down and called for an elbow on this. pic.twitter.com/Tl5G9HKpFp

And Nathan Gerbe ties the game with a PP goal. 3:09 to play. pic.twitter.com/uNqFPPxRLq

Close doesn't count but so close for Bailey, Nylander, CJ Smith. These are the opportunities you have to score on to win games. pic.twitter.com/95IWXSQll3

CJ Smith scores the overtime winner!! Buries a rebound and makes up for that late penalty. #Amerks win 2-1. Assists to Danny O'Regan and Justin Bailey. pic.twitter.com/nrMA22XxdI