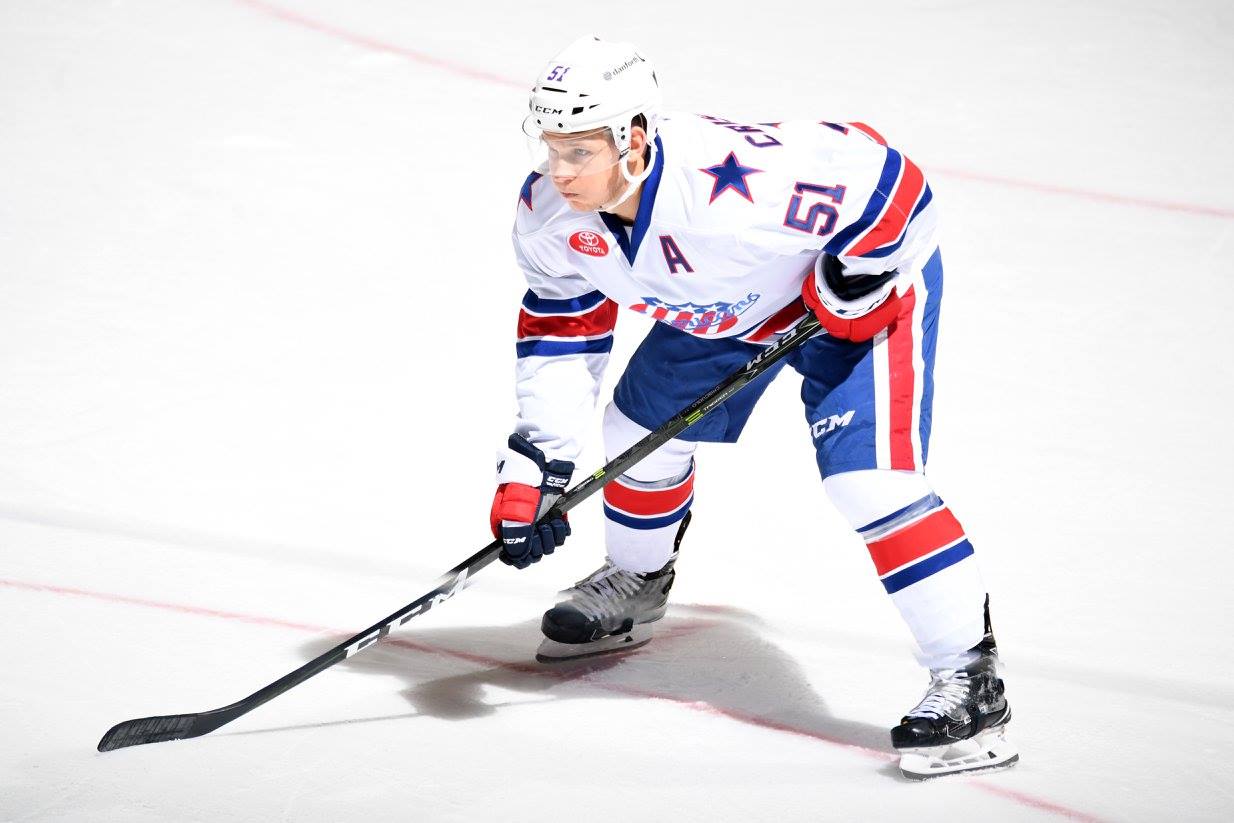 The Rochester Americans have back to back home games this weekend hosting the Hartford Wolf Pack and they’ll have a forward back in the lineup that has missed a majority of the season so far – Kyle Criscuolo. He was injured in a game against Utica on October 26 and has been out of the lineup since missing 19 games with a lower body injury.

Criscuolo returned to practice this week with the team after a lot of skating on his own to get back into game shape and make sure he’s healthy. Knowing he’ll be playing he said, “I’m very excited to get playing again and get back into game mode, it’s going to be a fun one.”

Chris Taylor talked about having him back in the lineup saying, “You can’t replace a guy with his character first and foremost in the dressing room and on the ice. His penalty killing, tenacious forechecking, and his face offs. We missed a lot of that from him and it’s great to have him back.”

After watching practices and games from the stands for almost two months it’s time to get back to the part that matters most, a game.

“I think there’s nothing really like a game especially when you battle with these guys every single day of the year in practice,” Criscuolo said after practice on Thursday. “The biggest thing is you want to have fun during the game and obviously Wednesday wasn’t fun a game, I think we just need to get back to enjoying the game and playing hard. I’m definitely excited, Christmas came a little early for me.”

He’ll be centering a line with CJ Smith and Wayne Simpson, one of those two players he’s very familiar with, that player being CJ Smith.

I asked Criscuolo if they’ll pick up right where they left off and he said, “He (CJ Smith) was saying in practice the first couple of reps he didn’t touch the puck and I was saying I was just getting to know Simpson because I’ve played with you enough.”

Talking about last season versus this season Criscuolo said, “I think last year we were in a similar situation around Christmas and we saw that if you take your foot off the gas you can slowly drop. You need to peaking at the right time so we need to keep building every week. We can’t take any weeks off here. We just need to keep pushing and make sure we’re getting better come playoff time and not going in the other direction.”

After practice on Thursday the game the night before, a 5-4 loss after leading 4-1, was briefly touched on.

“We get a chance to redeem ourselves Friday and Saturday,” Zach Redmond said after the skate. “Watched, learned from it, and now we’re putting it behind us.”

The games may not always go the way the team wants them to go for various reasons but they have a season long plan and they’re sticking with it.

Asked about the practice the morning after the loss Chris Taylor said, “Everything was normal. I don’t change anything up. We try to plan everything in the summer what we want to do. Sometimes we make a few different changes during the season but we go as planned in what we think is best for the players, not out of what we think happened during the night.”

“We moved forward as soon as we got here this morning. We did our things that we needed to to plan and get ready for Friday. You have to put those out of your mind,” Taylor added. “You don’t want to forget but you want to learn from those things. It wasn’t what we wanted or what we expected. The guys aren’t happy, we weren’t happy, no one was happy. we just have to move forward and worry about Friday night now.”

They’re aware of who they’re playing on a nightly basis but that doesn’t mean they’re going to change their team identity in terms of how they play. Well, that isn’t the plan at least. As we’ve seen two Wednesdays in a row things can happen differently.

Zach Redmond said, “It doesn’t matter who you’re playing and to be honest we’ve had kind of less success against teams that maybe we should have on paper been better against. It doesn’t matter at all, you have to approach the game the same way every time and I think that’s something we’re working towards. We have two thirds of the season left to kind of figure all that out before playoffs just how to be consistent and bring the same effort every night.”

“We want to get both of these games,” Criscuolo said talking about this weekend. “Hartford’s a pretty good team, so just need to focus on us right now and take it one game at a time.”

Alex Nylander returned to skating this morning but appears as if he’ll miss the game tonight. He was the only extra forward on the ice for extra skating time.

Scott Wedgewood is expected to get the start in net tonight. On Wednesday night his 33 saves were able to keep the Amerks in the game longer than they probably should have been.

Zach Redmond has slowed down in the goal scoring column and one of the reasons might be Lawrence Pilut called up to the Sabres.

Redmond paired w/ Pilut has 7G+2A and those 7G were all assisted on by Pilut. That’s half his goals this season. On the flip side, Pilut has 3G, two of those were assisted by Redmond.

Jack Dougherty is a Defensive Prospect to Watch