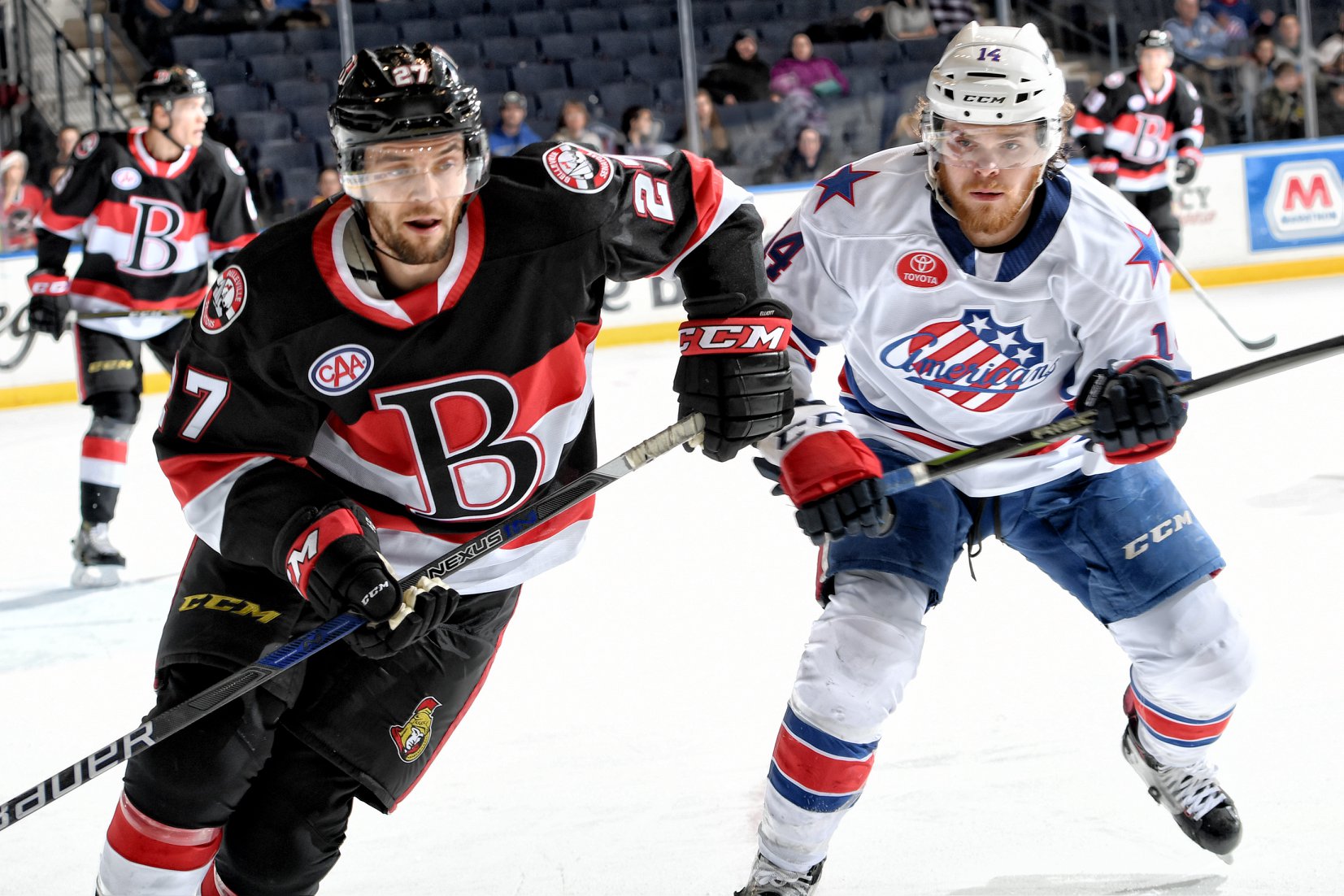 When this Rochester Americans team loses a game they make sure to lose it in a memorable way. They aren’t good memories either. After two disappointing Wednesday night losses at home in a row it’s tough for anyone who was at the game to think about this as a first place team.

Typically when a hockey team has a 3-0 lead in less than 12 minutes of the first period the chances are high that they’re going to win. On Wednesday night the Amerks had that lead and finished the first period with a 4-1 lead. They lost 5-4.

Everyone walking out of the arena was disappointed as well.

“I don’t know what it is about these Wednesday night games but we have to be better than that,”Â Nathan Paetsch said after the game. “It’s not good enough.”

Nathan Paetsch played in just his second game of the season, the first was on December 1st. He also played on the left wing, a position he’s played before in the past. Chris Taylor said that with Alex Nylander out of the lineup (day to day / lower body) that he thought it was a good chance to get Paetsch into a game.

“We didn’t play good enough,”Â Victor Olofsson said after the game. “We let up way too many chances and eventually we’re going to have to pay for them.”

Victor Olofsson scored his ninth goal of the season at 4:32 of the first period, was also the first goal of the game. Matt Tennyson prevented the puck from crossing the blue line, spotted Olofsson down low and made a pass into the slot. Less than two minutes later Sean Malone and Matt Tennyson chased down a puck on the side boards, Malone spotted Cornel at the top of the face off circle and Cornel scored his third of the season. Matt Tennyson and Sean Malone earned assists on another goal setting up CJ Smith for a shot from just above the goal line down low.

The Amerks scored three goals on five shots in the first 11:45 of the first period and chased Marcus Hogberg out of the net and to the bench. Filip Gustavasson stepped into the game finishing with 18 saves, one goal allowed, and earned the win.

If the game had remained a 3-0 win those would have been some great highlights. As Olofsson said, they were going to have to pay for letting up.

Part of that game management is controlling the pace of play instead of rushing down ice, attempt, turnover, play turns around.

Scott Wedgewood was the reason that Rochester stayed in the game as long as they did. There’s two goals he’d probably like to have back but having a team play in front of him would have made a bigger difference. Wedgewood finished the night with 33 saves.

Max McCormick scored a power play goal late in the first period tipping in a shot by Adam Tambellini.

It only took 84 seconds into the second period for the Amerks to take a 4-1 lead. Rasmus Asplund carried the puck down the right side of the ice and took a shot, it went off the pads of Gustavsson, rebound went right to Victor Olofsson on the left side.

Everything was downhill from that point on. There were some moments, some saves, but they’re meaningless when you give up four goals to lose.

Senators forward Rudolfs Balcers scored a power play goal for 5:17 of the second period to get within two. He was standing in the center of the Amerks penalty kill unit and scored off a pass from Christian Wolanin.

Victor Olofsson was in the penalty box for slashing. The officiating was questionable at times but that excuse wouldn’t be valid in trying to explain the loss.

It was still a 4-3 game with less than three minutes left when Justin Bailey, Eric Cornel, and Yannick Veilleux had a three on one chance. Bailey attempted a soft pass to Cornel in the slot. The puck was turned over and Belleville immediately went back the other way in a four on two and scored. Former Amerks defenseman Stuart Percy tied the game 4-4.

Paul Carey scored the game winning come back goal a short 58 seconds later. Stuart Percy pulled the puck out of the air just outside the blue line, dumped the puck back into the Amerks zone where Brandon Hickey was taken off balance trying to stop the puck, it turned into a quick three on two, drop pass, score.

The three goal deficit never slowed the Belleville Senators down. The Rochester Americans slowed down while failing to play a two way game and they paid for it.

As mentioned above, Alex Nylander missed the game due to a lower body injury and is considered day to day. He also missed practice on Tuesday.

The two healthy scratches were Dalton Smith and Devante Stephens.

Kyle Criscuolo returned to team practice this week and is probably to play this weekend. He has been out since October 26 with a lower body injury.

Kevin Porter is out as well with a lower body injury and isn’t expected back into the lineup until mid January.

Here’s the game as it happened in Tweets and gifs:

Eric Cornel puts the #Amerks up 2-0 with a power play goal! Great way to start the game. pic.twitter.com/LJWS9aR21k

CJ Smith puts the #Amerks up 3-0! THIRD assist of the night for Tennyson. pic.twitter.com/2lmh05uNdJ

McCormick puts Belleville on the board with a PP goal. pic.twitter.com/ZfCbO4rdIG

Save of the game so far! pic.twitter.com/2Ae3aq5I3c

Rebound goes right to #GOALOfsson for his second goal of the night! Assist to Rasmus Asplund. pic.twitter.com/79fP3ZoTUJ

2nd PP goal of the night for Belleville. Amerks still up 4-2. pic.twitter.com/cM0JAr6Ncd

But this was called interference.. pic.twitter.com/6Oa4dm2nzk

It's a game (and has been). Luchuk gets Belleville within 1. pic.twitter.com/posF5GaPDK

Wedgewood with the quick glove on a redirect!! pic.twitter.com/doEBLrO1pz

This was the turning point. A failed 3 on 1, turnover, two quick goals against. Amerks lose 5-4. pic.twitter.com/oSt4gHHDdv