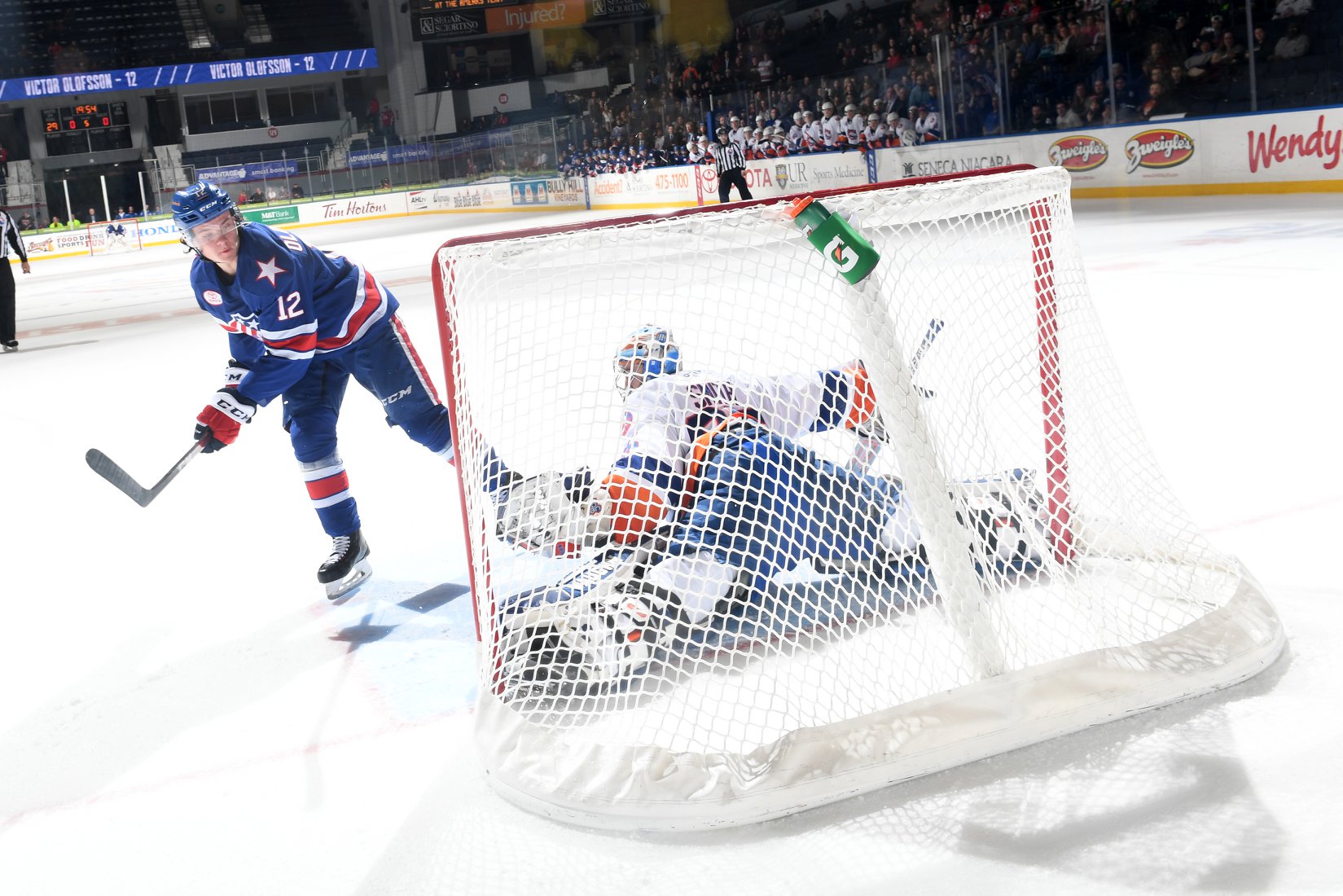 The Rochester Americans completed a comeback over the Bridgeport Sound Tigers on Wednesday night with a shootout win. Rasmus Asplund tied the game with 12 seconds remaining in regulation and then Victor Olofsson scored the only goal in the shootout for the win. Scott Wedgewood finished the game with 22 saves.

“We just stuck to the program and kept getting it behind them,” Kyle Criscuolo said after the game when talking about the key to the win. Criscuolo was sporting dried blood on the side of his face likely from a cross check to the face he took in the third period.

“I liked the whole game. I didn’t like that we were down 3-1 at one point but it was a good game,” Chris Taylor said afterwards. “We were playing against a top team in the league and we come back from a 3-1 deficit so I think it was a great game for us.”

Bridgeport controlled much of the first period but a lucky bounce helped the Amerks score first in the game. As Bridgeport was attempting to clear their zone the puck went off their own player at the blue line and bounced to Kyle Criscuolo who was able to fire off a quick shot to put the Amerks up 1-0.

Earlier in the day the team had talked about staying out of the penalty box but on their first penalty, a slashing call to Justin Bailey, the Sound Tigers were able to score. As they moved the puck down low a rebound went toÂ Otto Koivula on the opposite side of Scott Wedgewood and they tied the game 1-1 at 16:47 of the first period.

It only took 48 seconds into the second period for the Sound Tigers to take a 2-1 lead. Mike Sislo forced a turnover after sloppy puck possession by Kyle Criscuolo and Wayne Simpson in the neutral zone, skated in past Will Borgen, took a shot, andÂ Matt Gaudreau tapped in an easy rebound for his first goal of the season.

Sebastian Aho quickly exited his defensive zone and connected a pass to Tanner Fritz who was bursting into the Amerks zone with speed. A quick shot over the shoulder of Wedgewood and the Sound Tigers had a two goal lead.

Another lucky bounce went in favor of the Amerks when the puck bounced off of a linesmen and back into the Sound Tigers zone. Kyle Crscuolo made a quick turn back into the zone, passed it to Danny O’Regan going to the net and he was able to tip it into the net getting the Amerks back within one.

A power play chance was eliminated when Matt Tennyson was called for interference at his own goal line as Zach Redmond was making a turn to start the rush. Penalty trouble was something the team talked about and this was an avoidable penalty. The second period ended with Bridgeport up 3-2.

Andrew MacWilliam scored his first goal of the season, for real this time, at 3:11 of the third period to tie the game. Eric Cornel and Yannick Veilleux had some great work in the corner to force the puck out, Cornel and Randel had assists on the goal. He had thought he scored earlier in December but after review it was credited to Danny O’Regan. Attempt two of the season and looks like this one will stick.

Justin Bailey had an excellent breakaway chance off a high floating pass from Nathan Paetsch but he wasn’t able to score.

The play immediately went back the other way andÂ Ryan Bourque gave Bridgeport the lead. Again.

Justin Bailey had another breakaway chance but wasn’t able to score.

The clock was down to 15 seconds and the Amerks were still down by a goal. Scott Wedgewood was on the bench for the extra attacker and Sean Malone was setup for the face off. Malone won the face off to Zach Redmond but he didn’t have a clean shot so he passed to Alex Nylander in the center of the ice. Nylander faked the shot getting two Sound Tigers players to attempt a block but he sent a quick pass to Rasmus Asplund. The puck hit the right skate of Asplund, he quickly got the puck to his stick and scored.

They didn’t play their best throughout the game but they stuck with it.

Andrew MacWilliam said after the game, “It shows the kind of character we have in this locker room.”

In the overtime the best scoring chance was just as the buzzer went off when Wayne Simpson shot the puck just wide and Alex Nylander was probably half a blade away from tipping it in.

Victor Olofsson shot first in the shootout and would be the only player to score. This was the third game of the season against the Sound Tigers, the third win for the Amerks, and Victor Olofsson has scored the game winner in each one of them.

Chris Taylor said after the game, “He’s big time player and he wants to have the puck on his stick.”

Amerks practice Thursday morning before traveling to play against Laval on Friday and Saturday.

The camera didn't expect the bounce off a Sound Tigers player and the puck to stay in the defensive zone, Criscuolo was still there and scored unassisted. pic.twitter.com/pm03oE4S4G

Otto Koivula scored on the power play for the Sound Tigers to tie the game 1-1. pic.twitter.com/39ms1JYRGr

Sloppy. Bridgeport scored 48 seconds into the 2nd to take a 2-1 lead. Matt Gaudreau tapped this one in. pic.twitter.com/kmvNrRjH77

Tanner Fritz skates in with ease and Bridgeport takes a 3-1 lead. pic.twitter.com/nk3D1gcwT6

Danny O'Regan from Kyle Criscuolo and the linesman Derek Sylvester. Amerks get within one! pic.twitter.com/3IdjKaI1tA

Dalton Smith had one of the best chances to tie the game in the 2nd. Is the account @DaltonSmithFanCub available? We should take it. pic.twitter.com/96y4ODH6dm

Andrew MacWilliam scores his first of the season (for real this time) and it's a 3-3 game!! pic.twitter.com/bQjBCkPlEV

QB Paetsch had sent a high floater to Bailey rushing down ice but the puck went a few inches wide. pic.twitter.com/tqtiIu1oXa

The play went back the other way and the Sound Tigers took a 4-3 lead. pic.twitter.com/gXUfAcWoaz

Kyle Criscuolo was sporting a split nose and dried blood on the side of his face after the game from this beauty of a cross check that wasn't called. Looked like Kyle Burroughs delivered that one. pic.twitter.com/7EKD7nJ00V

The chances have been there. pic.twitter.com/R1InrbvKvQ

Win the face off, score a goal. Asplund ties the game 4-4 with 12 seconds left!! pic.twitter.com/QyfMyHzZkw

Nylander was so close at the overtime buzzer!! (clock at the top was off) pic.twitter.com/g9P8elLBNn

#GOALOfsson scored the only goal of the shootout and the #Amerks complete the come back win!!! pic.twitter.com/ZZVW3izWXc