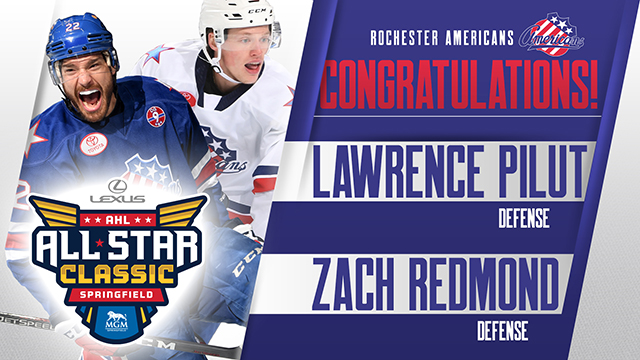 The American Hockey League announced the 2019 All-Star rosters on Thursday afternoon and two Rochester Americans defensemen were selected, Zach Redmond and Lawrence Pilut. Redmond has been a leading scorer on the Amerks roster and Pilut is still a top points leader even though he’s only played 16 out of the Amerks 34 games so far this season. The All-Star event takes place on January 27 and 28th.

Press release for the announcement:

Currently in his first American Hockey League season after being named the SHLâ€™s top defenseman in 2017-18, Pilut has been more than a point-per-game player for Rochester, recording 22 points (3+19) from the blueline as well as a team-best plus-19 on-ice rating that is tied for third-best in the AHL. The Tingsryd, Sweden, native began the season with four multi-point efforts through his first seven games, including three separate three-point efforts over that span, before totaling nine points (1+8) over a season-long seven-game point streak to open the month of November. Heâ€™s been held scoreless just three times all season and hasnâ€™t gone more than one game without a point.

Pilutâ€™s offensive output earned him a recall to the Buffalo Sabres on Nov. 21 and heâ€™s remained with the big club since, picking up three assists in nine NHL appearances. Despite currently being on recall, he remains among Rochesterâ€™s top five point-getters and is tied for eighth in scoring among all AHL defensemen coming into the New Year despite only appearing in 16 games this season. His 19 assists are also tied for fourth-most amongst blueliners.

Redmond, who earns his first trip to the AHL All-Star Classic since 2012, is on a record-setting pace to etch his name in team and league history. The 30-year-old veteran blueliner has scored a team-high 15 goals this season, including seven on the power-play, good enough for sixth in the league in that category. Redmond, who had an AHL-best nine-game point streak to end the month of October, enters the New Year tied for 12thÂ in the league in goals (15) and ranks second amongst all active AHL defensemen with 28 points, while his seven game-winning goals are tops in the AHL.

Earlier this season, the Traverse City, Mich., native became the fastest Amerks defenseman to score 10 goals in the fewest amount of games to begin the season since Amerks Hall of FamerÂ Don McSweenÂ reached the mark in his first 21 games during the 1989-90 campaign. Redmond reached the mark in just 14 games. Redmond, who last season became just the first Amerk blueliner in seven years to lead the team in scoring, has already matched his career-high of 15 from last season and needs only three more goals to tie the single-season franchise record for the most by a defenseman of 18, set byÂ Rick PagnuttiÂ during the 1972-73 season. The AHL record for goals by a defenseman is held by John Slaney, who netted 30 for the Wilkes-Barre/Scranton Penguins during the 1999-00 campaign.

The two-day event begins on Sunday, Jan. 27 with theÂ 2019Â AHL All-Star Skills CompetitionÂ at 8:00 p.m. In keeping with its traditional format, the All-Stars from the two Eastern Conference divisions will be squaring off against the All-Stars from the two Western Conference divisions in seven skills events, including hardest shot, fastest skater and accuracy shooting.

TheÂ 2019 AHL All-Star ChallengeÂ will then take place on the evening of Monday, Jan. 28 at 7:00 p.m. For the fourth straight year, instead of a traditional 60-minute game, the leagueâ€™s all-stars will be divided into four teams, one representing each of the leagueâ€™s divisions (Atlantic, North, Central, Pacific). The teams will then play a round-robin tournament featuring six games of 10 minutes each played entirely at 3-on-3. The two teams with the best records at the end of the round-robin tournament will face off for the championship, a six-minute game also played using the 3-on-3 format. Rosters for each team will be composed of 11 skaters and two goaltenders.

Tickets for the two-dayÂ 2019 Lexus AHL All-Star Classic presented by MGM Springfieldare priced at $39, $49, $59 and $99, and include admission to both the Skills Competition on Jan. 27 and the All-Star Challenge on Jan. 28. Tickets can be purchased either in person at the MassMutual Center Box Office located at 1277 Main St. in Springfield, Mass., online atÂ WWW.SPRINGFIELDTHUNDERBIRDS/ALLSTARÂ or by calling 1-413-739-4625.