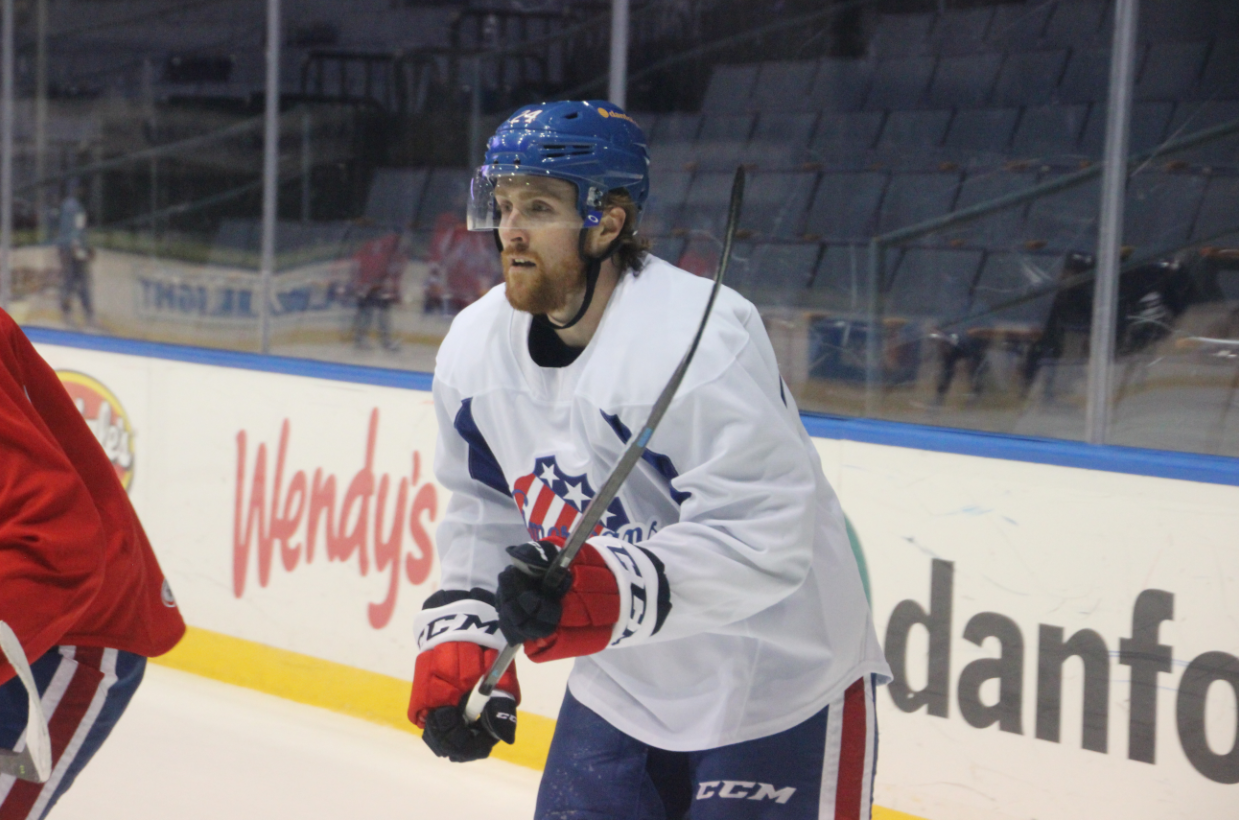 The Buffalo Sabres announced on Tuesday that they placed Scott Wilson on waivers with the intentions of assigning him to the Rochester Americans. On Wednesday afternoon he cleared waivers and was on the ice with the Amerks for practice.

Wilson hasn’t played a game this season with the Sabres due to an ankle injury. He’s been skating for about five weeks but is just getting back into full team skates.

He wasn’t assigned to the Amerks on a conditioning assignment because he still would’ve taken up one of the 23 roster spots that the Sabres have available. Once a player clears waivers and is assigned to the American League they no longer count against that limit.

“They made it clear to me too that a lot of times when you throw someone on waivers it’s trying to get rid of them a little bit,” Wilson said. “They made it clear that wasn’t the case. I’m excited to be back here, have some fun playing hockey, and get that timing back.”

He’s already made great impression. Chris Taylor said, “We’ve talked a lot already this morning. He wants to get better but he also wants to help the team win games. He doesn’t just care about himself and that’s what I like about him already.”

Buffalo signed him to a two year extension over the summer through the end of the 2019/2020 season. Last season after being acquired in a trade with Detroit he finished with 14 points (6G+8A) in 49 games. In his first practice he was skating with Kevin Porter and Wayne Simpson.

Kevin Porter and Scott Wilson know each other from playing together in both Wilkes-Barre/Scranton and Pittsburgh.Â They both broke their ankles at the same time as well in the Pittsburgh organization and spent a lot of time together recovering.

Looking back Wilson said, “I had a lot of fun with Ports. It feels like back in the day even though it’s not that long ago. We had a lot of fun together so I’m excited to be back with him.”

Wilson is looking to get his timing and conditioning back but also score some goals. When asked what kind of player he is for those who aren’t familiar he said, “I play a hard style, in on the forecheck, and be physical. The last time I was in the American League I used to score a lot of goals so I’m hoping that comes back a little bit. Being a hard nosed guy that can make plays when need be.”

How long he’ll be in Rochester is up in the air but is expected to be more than two to three games. The first week or two will be about getting his conditioning back and also working on the timing of the game. He’s going to jump right into the lineup with a lot of minutes and has also been told that if he needs a breather or is sore that a shift off or a morning off from practice is up to him.

“I miss the bus trips,” Wilson said with a laugh when asked him about the first one Friday night. “This one isn’t that far.Â People don’t realize that as as much it sucks at two or three in the morning it’s where you build friendships and stuff like that. It’s part of the game, a lot of these young guys are doing it now. One day they’ll be flying on jets in the NHL. I’m going to back to enjoying it and trying to make the most of it.”

Kevin Porter returned to team practice on Wednesday afternoon after skating on his own for a couple of weeks. He’s been out of the lineup with a lower body injury since December 7 vs Providence. Porter has missed 13 games in that stretch where the team went 7-6.

His return is being taken day by day but Porter said today that they’re planning for him to return on Friday if everything goes as planned.

Andrew Oglevie is currently the only Amerks player on the injured list. He’s been out indefinitely with a concussion since November 30.

Judd Peterson was assigned back to Cincinnati today. With the addition of Wilson and return of Porter there wasn’t a need for an extra player. Peterson had scored his first American League goal on Saturday in Laval.

Here’s where the Amerks are currently at:

Paetsch has only played in four of the Amerks 36 games this season. Five of the six spots will be taken by Porter, Wilson, Redmond, Tennyson, and MacWilliam. We’ll be down to Dalton Smith and Tyler Randell fighting for the last spot.

1 thought on “Scott Wilson Looks to Win, Score, and Enjoy the Bus Trips”