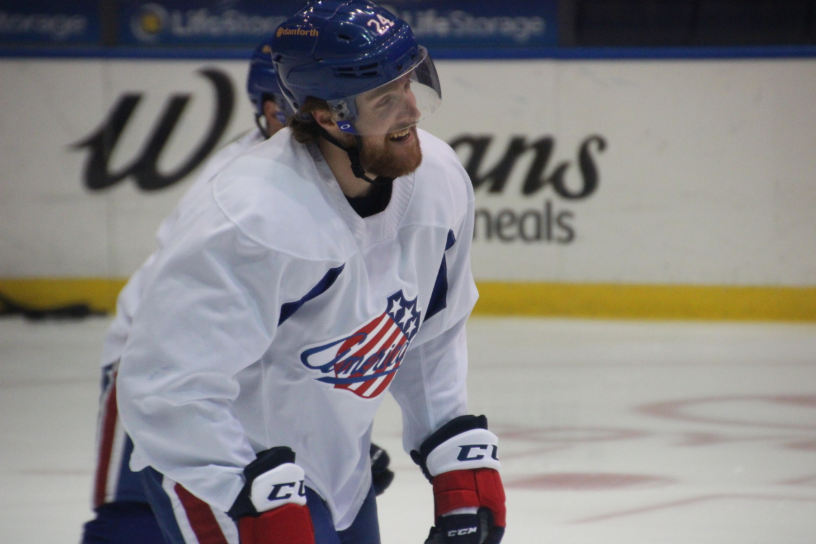 The weekend is upon us and for the first time since the start of December the Amerks had the week days off to rest up and prepare for two big games against the defending Calder Cup champion Toronto Marlies. They’ll play Friday night in Rochester and at 4pm on Saturday in Toronto.

A big crowd is expected tonight inside the old barn. The lower bowl is almost sold out as of writing this with some upper sections sold out as well. Plan accordingly for long lines at the Civic Center garage if you’re looking to park and avoid the cold weather.

Toronto has won four of their last five games with wins against Utica, Syracuse, Binghamton, and Charlotte. They’ve been at the bottom half of the North Division standings most of the season but are slowly working their way back up into playoff contention for the second half of the season.

Rochester has won three of their last five games with wins against Laval, Bridgeport, and Toronto. The Amerks continue to stay at the top of the North Division and had some help this week with losses by Syracuse, Utica, and Cleveland.

The Amerks have won both meetings between the two teams so far this season, both times being on home ice. The first game was a 5-4 shootout win back on October 19th follow by a 5-1 win on December 28.

It’s said often, anyone can win any game in the American League on any day of the week. Previous games and stats are a starting point for any discussion but often have very little meaning. That was also the team message today as well, those games are in the past and don’t mean anything.

Score goals, make saves, and more importantly stay out of the penalty box are keys for an Amerks win. The power play has improved in recent weeks for the Amerks putting them at 6th overall in the league. The penalty kill continues to struggle and is 26th overall. The Marlies are in a similar position with a 4th overall power play and 28th overall penalty kill.

Adding players to a lineup does have meaning though and the Amerks will have two new players on their top line – Kevin Porter and Scott Wilson. Porter has missed 13 games with a lower body injury. Wilson hasn’t played a game this season, he injured his ankle in Buffalo during the preseason. They’ll be playing alongside Wayne Simpson who is tied for third on the team in goals with 12.

Wilson cleared waivers on Wednesday afternoon, immediately joined the Amerks for practice, and jumped into the top line with Porter and Wayne Simpson.

Look for the rest of the forward lines to be pretty similar to previous games. Here’s how they skated during practices this week (subject to change):

CJ Smith is expected to be assigned back to the Amerks and join the team on Saturday in Toronto. He had traveled to Carolina with the Sabres.

Zach Redmond continues to chase the Amerks record for goals by a defenseman in a season. He’s currently at 16 goals and the record is 18.

This weekend will mark the halfway point of the season and we’ll have a full report card on Sunday afternoon.