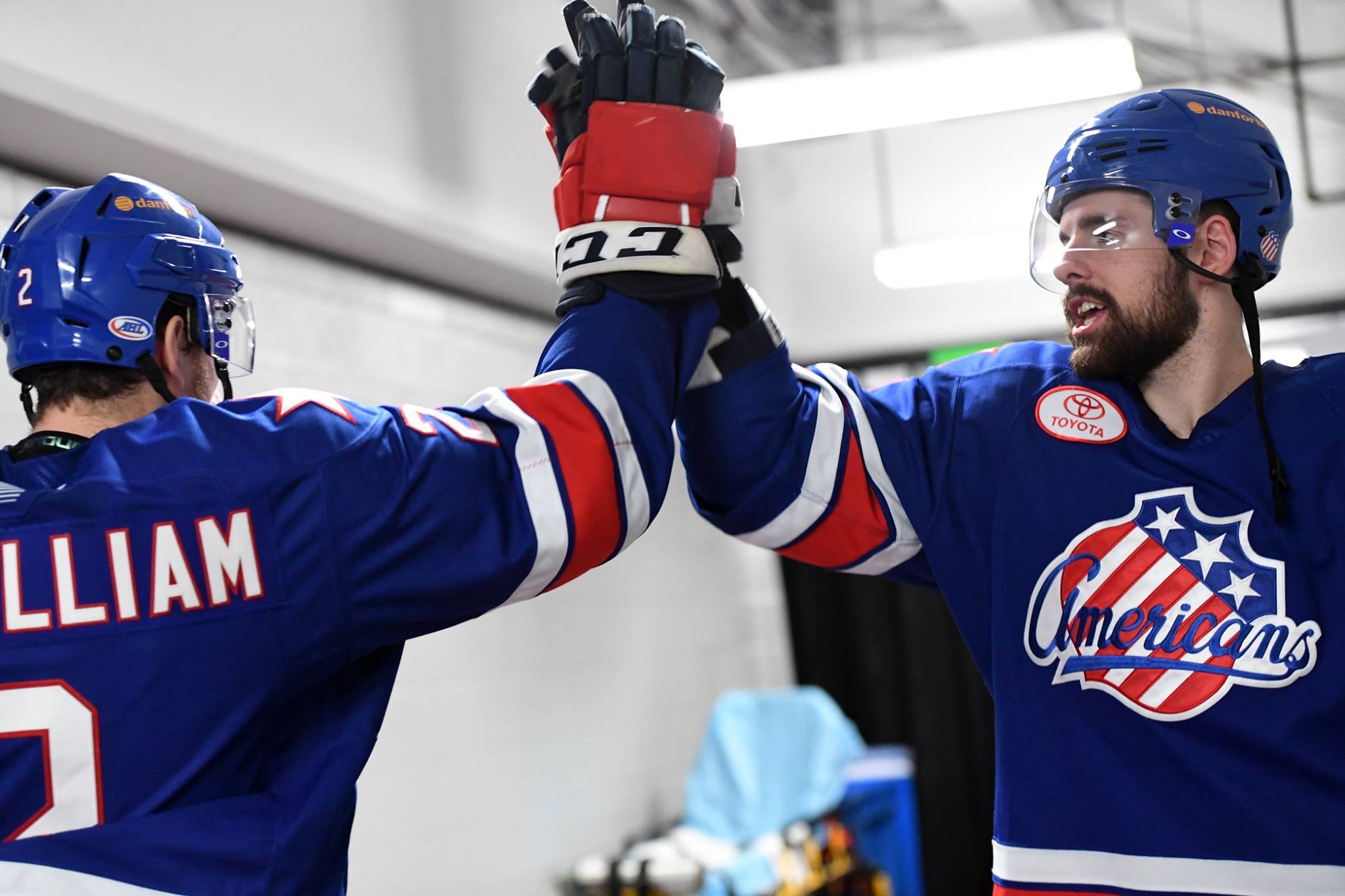 We’ve officially reached the halfway point of the 2018/2019 season for the Rochester Americans which means itâ€™s time to take a look at where things are after 38 games. I’ve spent time breaking things down into five game segments which have been a roller coaster at times,Â but now it’s time to look at half of the overall season.

The team has a 13-3 record when playing against the top half of the North Division (Utica, Syracuse, Toronto, Cleveland) and a record of 3-4-1 playing against the bottom half of the North Division (Binghamton, Laval, Belleville). Anyone can win on any given night in the American League and whenÂ yourÂ overall record is that much better over the top teams it’s a great sign. Is it sustainable? That’s for the second half prediction at the bottom. They’re also 3-0 against Bridgeport, the team that is second overall in the Eastern Conference.

When it came to grading the players I took a different approach and decided to combine thoughts from 11 different people (that includes myself) that are involved with watching this team on a nightly basis home and away. The grades are based on how they’re playing this season on the Rochester Americans. They’re not predicting or hyping NHL potential, that’s not what this site is about. We’re about covering the Rochester Americans and how players play on this team.

The team kicked off the season talking about being an elite playoff team and based on their record we can make the conclusionÂ that with more consistency (and hopefully a top center)Â they’re on that path and have been since game three.Â Â There is a lot of excitement to see a motivated Scott Wilson come down and help this team.Â  At this level heâ€™s a dominant 2 way player.Â  He could be the missing piece of the puzzle but we donâ€™t know for how long?Â  There was a consensus among the group of fans we discussed this with that the Amerks will advance to at least the 2ndÂ round.

Before jumping into individual grades let’s take a look at some of the best.

MVP at the Halfway Point

A late edit to this category creates a tie between CJ Smith and Zach Redmond.

Zach Redmond was bringing a great defensive game to the team but the biggest surprise has been his offensive production. 32 points (16G+16A) in 38 games is good for second on the team overall. Redmond leads by example every night.

CJ Smith showed up to play in game 38 with three goals and an assist to take the team lead in points with 33 (16G+17A). The team was 2-2 without him and upon his return it was clear what kind of offensive threat he provides. He’s been the most consistent player from the start of the season.

By definition there’s only six rookies on the team this year and only two have played a significant amount of games – Rasmus Asplund and Will Borgen. The rookies are Rasmus Asplund, Will Borgen, Brandon Hickey, Judd Peterson, Andrew Oglevie, and Myles Powell.

Will Borgen wins this one by a long shot. A reliable defensive defenseman that plays with one mindset – clear the puck and get it to the forwards. There may be nights you don’t remember him being on the ice and that’s because he’s doing his job and doing it well. A physical defenseman that made the jump from college to pro’s look easy.

Danny O’Regan is a close second. He has 12 goals (tied with Wayne Simpson) and only behind CJ Smith and Zach Redmond who each have 16 goals. He may not have a flashy nickname when he scores goals but he still has one of the best shots on the team.Â He seems oddly disregarded by the Sabres fans but make no mistake – this guy is a prospect.

Dalton Smith. Although, is someone really an unsung hero when many know it? The team has a record of 21-7 when he plays and a record of 2-6-2 when he doesn’t play. There’s always more to it but that’s a big difference that’s worth noting. The energy, dedication, grit, and determination he brings to every shift isn’t going to show up on the scoreboard but has a direct impact on the outcomes of a game.Â Itâ€™s very clear he brings energy to the fans and to the bench.

Victor Olofsson. European prospects can be hyped up before arriving in North America but until they play a game you never know how they’ll adjust and produce. He hit a slump that everyone goes through at some point but hasn’t slowed down with effort.

Here are our individual grades:

They’ve been in first place since the second week of the season and only fell out of the top spot once since then. They’ve had a five game winning streak along with two other three game winning streaks. There’s only been one three game losing streak. They’re beating the top teams when it matters. There’s been a handful of concerning losses but those were one game situations, not extended periods. The power play improved in the second quarter but the penalty kill unit has gone in the opposite direction. A better home record and better penalty kill would improve the overall grade and overall record.

The team set the goal of being an elite playoff team and they’re on that path when you look at the big picture. Is the direction they’re on sustainable?

They’re a playoff team but how far they make it in the playoffs is up for debate. The North Division has tightened up a lot over the past month with teams improving while the Amerks have remained relatively consistent. We saw the same scenario last season where the team started to struggle in the second half after a strong first half.Â 30 of the next 38 games are against North Division teams. We’ll see who gets better, who remains the same, and who gets left behind.

Syracuse has lost five of their last six games which has helped the Amerks stay in the top spot. That same Syracuse team is known for going on long winning streaks and still has the capability to run away with the division. There’s till nine games between Rochester and Syracuse to be played through the end of the season.

Finishing the month of January with a winning record will be key to the second half as it starts to accelerate. There’s going to be losses but the team has to find a way to avoid the 5-1 type of loss they had against Toronto on Friday. Two games to look forward to will be against Charlotte in mid March for a rematch of the opening weekend of the season. Charlotte dominated those two games and has stayed at the top of the Eastern Conference since.

A healthy Buffalo Sabres team will also factor into how the second half goes along with the trade deadline. Right now the Sabres are at their roster limit with only three players that could be sent to the Amerks without having to clear waivers – Lawrence Pilut, Casey Mittelstadt, and Tage Thompson. All three have proven they are NHL players. The only opportunity for anyone to be called up would be a player going out on injured reserve. Once Casey Nelson returns from an injury and comes off of injured reserve the team will have to open up a roster spot. Do they send down Pilut? Try and waive Nelson? That’d be a massive boost for Rochester either way. Do they find a way to trade someone? Do they risk putting Remi Elie on waivers? As long as the Amerks don’t lose a player they’re in a good spot.

A season ago we saw this team in a similar position but in the second half everything trended in the wrong direction. The second half is loaded 30 divisional games, that’s a lot of points on the table to create some distance or intense playoff competition.

It’s going to be close finishing in first or second place and it doesn’t matter where they end up. There was a time when home ice advantage was the goal but with a better road record maybe that doesn’t make a difference anymore.

Overall consensus is that this is a second round playoff team. History and trends show that other teams are getting better, this team is simply remaining consistent.

This team will go as far as the consistency of Scott Wedgewood takes them. He can’t do it all himself either which means the 18 skaters in front of him need to play a better defensive game.

Come back on April 16th when the regular season is over to compare first half and second half report cards.