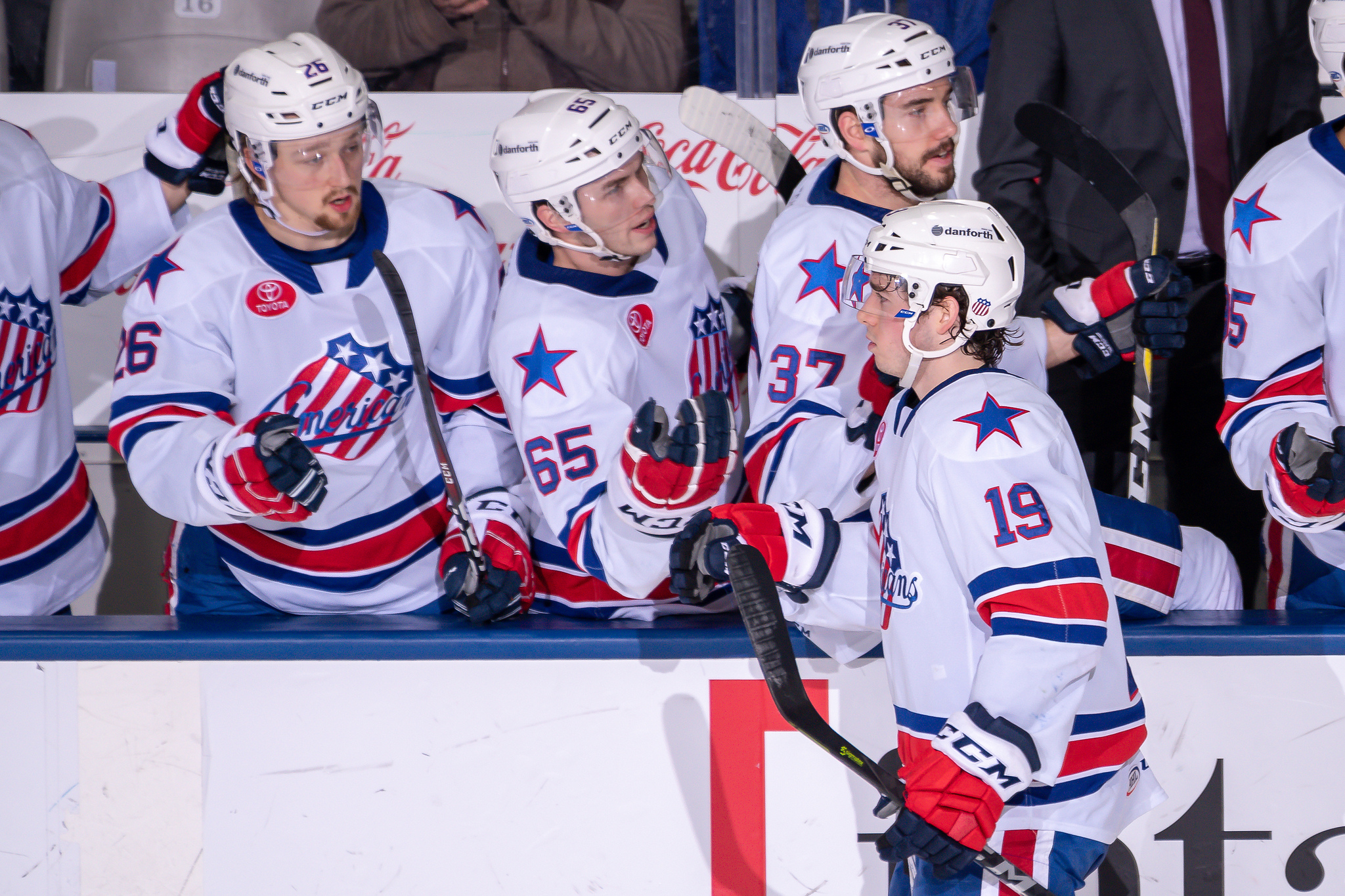 Less than 24 hours after being losing a disappointing game on home ice in front of a large crowd the Rochester Americans traveled to Toronto with the addition of CJ Smith and turned the weekend around with a commanding 5-1 win. It was the 10th regulation loss of the season on home ice for the Marlies.

CJ Smith was the difference maker in the Saturday afternoon game as he finished the game with three goals, one assist, and seven shots on net. One the best games of his career.

The first period was pack and forth for the first 11 minutes with both teams playing a fast paced game with no signs that they had just played each other less than 24 hours earlier.

As Kevin Porter was about to leave the ice after dumping the puck he was hit by Pierre Engvall and the refs called Engvall for interference.

Rochester didn’t have the best power play setup for the majority of the two minutes but with 23 seconds left they finally setup a play and CJ Smith was ready for a one timer from close to the blue line to put the Amerks up 1-0. Zach Redmond was down low, passed the puck up top to Kevin Porter, and Porter saw CJ Smith with his stick raised ready to fire a shot.

It only took five minutes into the second period for CJ Smith to score his second goal of the game and give the Amerks a 2-0 lead. Wayne Simpson fed the puck to Zach Redmond cruising down low into the face off circle, Redmond picked his head up and spotted CJ Smith cross ice who scored as he put one knee down to the ice.

After that goal the same line took the face off and less than a minute later CJ Smith had a fast rush down the right side and almost completed the hat trick but MichaelÂ Garteig was able to put a pad on the shot.

Rochester was able to kill off two penalties in the second period against a Toronto power play unit that is at the top of the league.

Trevor Moore was able to get Toronto within a goal at 2:43 of the third period and make it a close game, something that doesn’t sound likely given the eventual outcome. Matt Tennyson attempted to clear the puck with a lead pass out of the zone but it was intercepted by Dmytro Timashov. A quick turn and pass to Moore who beat Wedgewood high blocker side.

Brendan Guhle made a text book sliding save to break up an odd man rush shortly after the goal at a time the game could’ve easily been tied up.

The turning point of the game was whenÂ Michael Carcone was given a five minute cross checking major and a game misconduct. Will Borgen was playing the puck along the boards when Carcone went in for the hit but ran into either Borgens elbow or butt end of his stick and went down to the ice. The play was whistled dead with Carcone down on the ice. After Carcone slowly got up from the ice he slowly skated down ice during a break in play, with the ice crew on the ice with shovels, and delivered a high cross check to Jack Dougherty.

After the game Sheldon Keefe, Marlies head coach, talked about about Carcones actions saying, “A really good opportunity for that player to recognize just how selfish he was in that point in time.” He even mentioned Carcone putting himself ahead of the team.

CJ Smith fired a hard shot from the point where the initial save was made but with the puck loose at the side of the net Kevin Porter ensured it went into the back of the net.

Victor Olofsson scored his 11th goal of the season less than two minutes later off a pass from Rasmus Asplund. Olofsson was parked in front of the net all alone and immediately blasted the pass from Asplund into the net.

A 4-1 advantage at that point delivered the win for Rochester but they weren’t done. Toronto pulled their goalie in a desperate chance with over five minutes remaining in the third period and it provided CJ Smith the opportunity to score his third goal of the game into an empty net.

As Toronto attempted to pass the puck down low it was intercepted by Jack Dougherty who spotted CJ Smith departing the defensive zone and heading down ice.

Scott Wedgewood finished the game with 26 saves for his 14th win of the season.

The two games were almost mirror images of each other. Friday night saw Toronto deliver a crushing loss to Rochester on home ice. Late Saturday afternoon it was Rochester delivering a crushing loss to Toronto on home ice. Friday night saw an Amerks team that didn’t show up to play. Saturday afternoon saw a Toronto team take costly penalties and it cost them.

Splitting the weekend salvaged the weekend for the Amerks to keep them in first place along with some help from other North Division teams losing.

There were two lineup changes in Toronto. Sean Malone didn’t travel with the team to Toronto and is considered day to day for now. That provided the open forward spot for CJ Smith to play.

Brandon Hickey sat the game out on defense with Jack Dougherty going into the lineup in his place.

Rochester doesn’t play again until next weekend when they travel to Wilkes-Barre/Scranton on Friday and then Allentown to play Lehigh Valley on Saturday.

The game in gifs as they happened:

CeeeeeeeeeeJ does it again! Amerks up 2-0. Assist to Redmond and Simpson. pic.twitter.com/H5MitX4KDw

CJ had a great chance and almost scored his third of the day shortly after that faceoff following his 2nd goal. pic.twitter.com/KHmJlkFjM7

Trevor Moore scores to get the Marlies within one. pic.twitter.com/WZ9b9wz8yL

Captain Porter gives the Amerks a 3-1 lead with a PP goal!! Assists to Wilson and CJ Smith. pic.twitter.com/25agdLq3sl

Another PP goal and #GOALOfsson puts the Amerks up 4-1!! Assists to Asplund and Nylander. pic.twitter.com/hLs4S0fpCd

No goal, high stick, but CJ Smith is out there skating around everyone. We'll enjoy him again while he's here. pic.twitter.com/i2Djt7kheO

CJ Smith scores in an empty net and completes the hatty! Amerks up 5-1. pic.twitter.com/kW9333dHDr

An extended look at the 3rd goal of the game for CJ Smith. Love the way he just backed out of the zone knowing he had a chance, Dougherty saw him and sent the pass his way. pic.twitter.com/LHflqWWJMi

2/2… watch up top. After the whistle, ice crew out, Carcone skated over and cross checked Dougherty up high. That should earn a follow up from the league. pic.twitter.com/p6cyN6E673