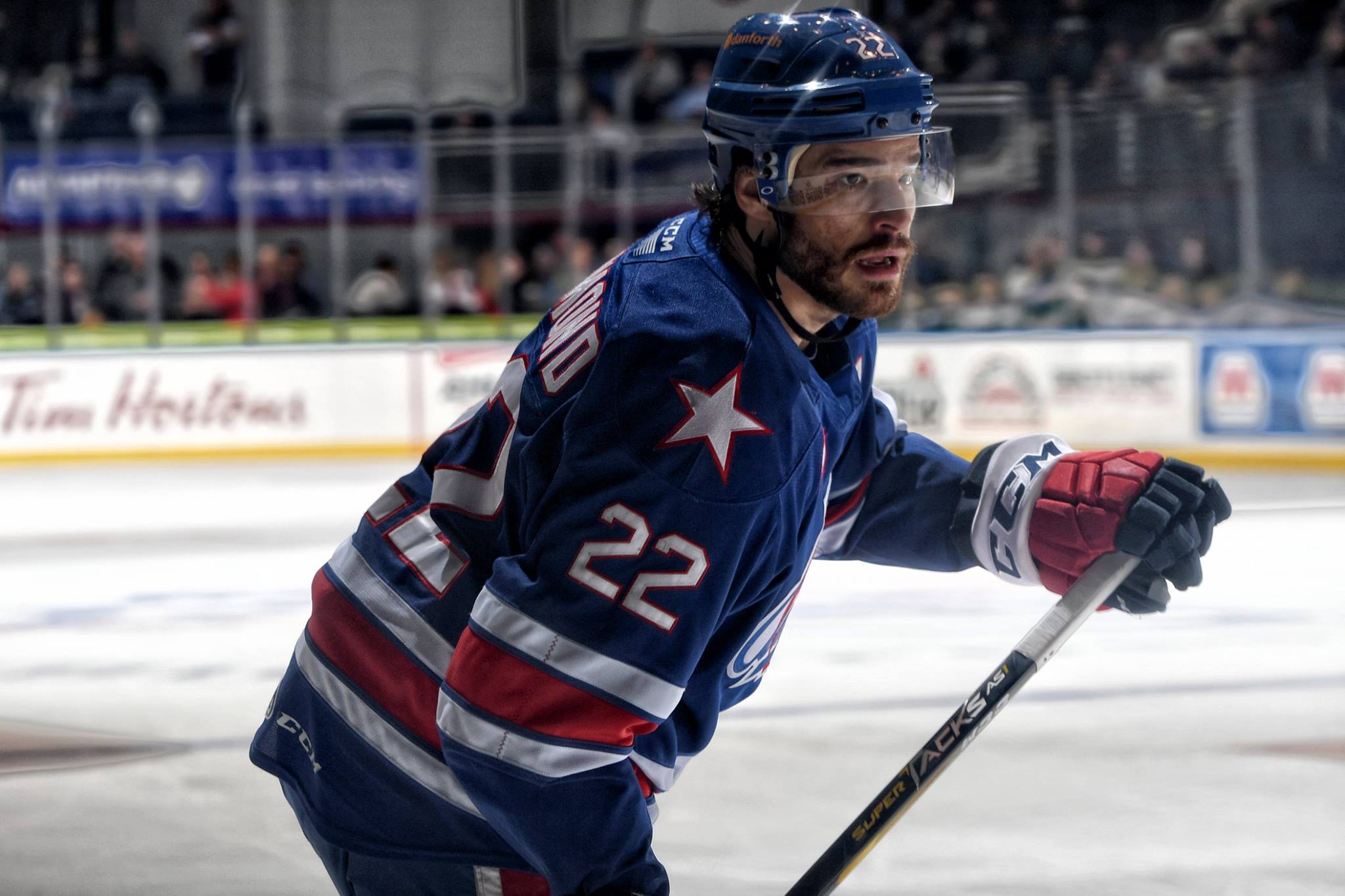 Wednesday night finished with the Rochester Americans having to score seven goals to defeat the Binghamton Devils. How they got to that win wasn’t in the best way possible and the team acknowledged that after the game. Games aren’t always going to be pretty but when you win they’re a little prettier.

“It’s a good night when you get two points,” Kevin Porter said after the game. “There’s a lot of things we have to take a look at and get better at from this game but we got the two points and we’ll take it.”

Zach Redmond scored the game winning goal in the 7-5 win, a goal that counted as his 19th to break the franchise record for goals by a defenseman in the regular season. Unfortunately in the last minute of the game he suffered an apparent ankle injury and had to be helped off the ice. Check back on Thursday for an update.

More on just Redmond and the record breaking goal:

“I thought offensively we did a really good job tonight, created a lot of scoring opportunity. Yeah, we gave some goals but they’re a good team,” Chris Taylor said talking about the game. “It was a good game, it was really enjoyable and a big two points.”

A 3-0 lead heading into the final minute of the first period was looking pretty good. Scott Wilson redirected a shot by Andrew MacWilliam. Victor Olofsson delivered a perfect pass to the blade of Danny O’Regan skating into the slot. Taylor Leier boxed out the defenseman to redirect a Brendan Guhle shot.

Nathan Bastian of the Devils scored with 45 seconds left in the period to give the game a slight momentum change. You can see in the highlights or gif below how easily he split the defense, mainly Guhle.

Victor Olofsson scored his 14th goal of the season at 8:53 of the second period all alone in front of the net with a pass from Rasmus Asplund who was circling behind the net. After that is when things got a little interesting.

The Devils scored three goals in 1:55 to tie the game and make it interesting. Eric Tangradi scored on what would have been goaltender interference in the NHL.Â Brandon Gignac scored on a breakaway.Â Nathan Bastian scored his second of the game all alone in the slot.

There was a feeling of this could be another loss on home ice after having a lead.

Asked if there’s a nagging issue with giving up leads at home Chris Taylor said, “There’s no nagging issue, it’s happened a couple of times at home. Everybody wants to blow it out of proportion. We won the game and it’s what it is.”

Danny O’Regan scored his second goal of the game to regain the lead at 15:27 by tracking the puck and poking in a rebound on the power play. Zach Redmond scored the eventual game winner less than a minute later.

One goal by the Devils in the third period wasn’t enough to tie it up again and Wayne Simpson scored an empty net goal with 29 seconds left to secure the win.

Borgen, Tennyson, Cornel, Randell, and Nylander were the only five skaters that didn’t tally a point in the game.

Here’s the goals in gifs as they happened:

What a tip in for Scott Wilson! His first goal with the #Amerks and they're up 1-0. pic.twitter.com/XjsWQn4ZiV

Danny O'Regan makes it look so easy. His 14th goal of the season. Amerks up 2-0. pic.twitter.com/sWAPanAc8u

Assists to Redmond and Guhle. Leier battling in front of the net gave it the redirect. His 11th goal of the season. pic.twitter.com/r2hTvEL6fU

Nathan Bastian scores for Binghamton. The feed froze for a split second to show him split the defense. pic.twitter.com/XMqCXH1ppg

Olofsson from Asplund and the #Amerks are up 4-1!!! That's the 14th of the season for #GOALofsson pic.twitter.com/AA3n19NiEb

That's a good goal in the American League. Eric Tangradi gets Bingo within two. pic.twitter.com/nmPGivCvhb

Brandon Gignac scores on a breakaway for Bingo to get within one. pic.twitter.com/KzOtBIEjdy

15th of the season for Danny O'Regan on the PP and the #Amerks have a 5-4 lead! pic.twitter.com/5dxfAm04Ra

Nick Saracino scores early in the 3rd to get Bingo within one. Amerks lead 6-5. pic.twitter.com/tIsgwovX1F

Wayne Simpson scored his 13th of the season after a block by CJ Smith. Amerks win 7-5 pic.twitter.com/0NaomHyMxN

Ugh. Hopefully Redmond is alright. Awkward into the boards. Was slow to get off the ice, likely the reason he didn't come out for his 1st star. pic.twitter.com/ed1VgFYTdo