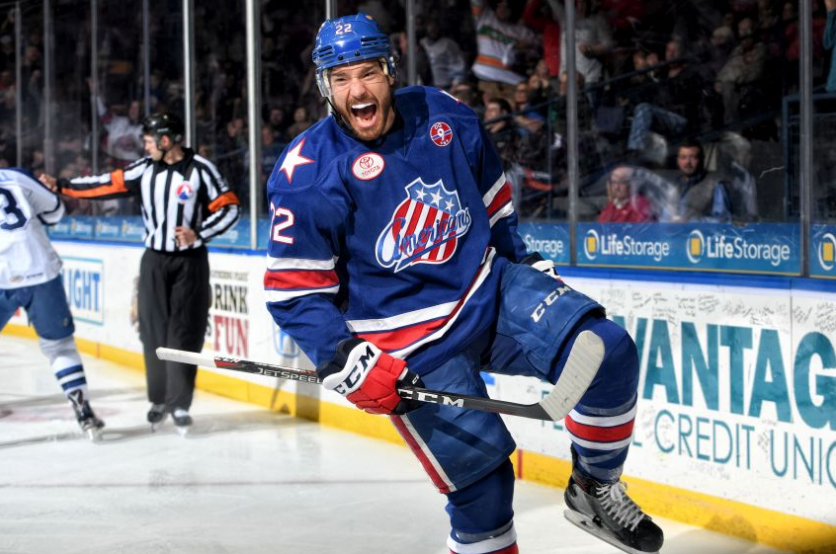 Rochester Americans defenseman Zach Redmond has broken the franchise record for goals by a defenseman in the regular season with his 19th goal of the season. It’s a record that stood for 46 years set by Rick Pagnutti during the 1972/1973 season scoring 18 goals.

Redmond scored twice against the Wilkes-Barre/Scranton Penguins on January 18, 2019 to tie the record and then scored his 19th against the Binghamton Devils on Wednesday night to break it. His 19th goal was also the game winning goal in the Amerks 7-5 win over the Devils.

Kevin Porter had an assist on the record breaking goal as he lead the rush down the ice. Porter said,Â “I saw I could get a stick on one of their passes and I poked it free. He caught up to me pretty quickly so I figured I had to give it to him. I actually didn’t know it was him but I feel like you have to dish it on a two on O.”

“First and foremost he’s a great person for our dressing room and what he does with helping our team, this organization, and the community is unbelievable,” Taylor said after the game talking about Redmond. “What he’s doing on the ice is incredible.”

Redmond started the season with 13 goals in the first 19 games putting him on a direct path to break the franchise record. Things cooled off once Lawrence Pilut was called up and itâ€™d take another 20 games for the next five goals to reach 18. The record as it stands now will show that he scored 19 goals in 41 games.

Danny O’Regan talked about how Redmond plays saying, “I think he’s one step ahead of everyone and a really smart player. Some of the plays he makes and the pucks he’s able to get through and put on net is special.”

This is the second season for Redmond with the Rochester Americans after the Buffalo Sabres acquired him in a trade from Montreal in exchange forÂ Nicolas Deslauriers.

Redmond signed a two year American League contract with the Amerks through the end of the 2019/2020 season that provides stability and pays him NHL money. He’s embraced the comfort of being with one team, in one place, and is having a career season at the age of 30.

Chris Taylor also said, “He wants to prove what he’s worth and why we signed him for two years. He just comes to work every day, he’s a humble guy. He probably doesn’t like talking about this at all and that’s what makes him special. The guys are more happy about it than he was.”

Zach Redmond has Settled into Breaking a Record

“Hopefully he’s looking at the AHL record now,” Porter said. “Hopefully he keeps scoring and we’re talking about that soon.”

The American League for goals by a defenseman in the regular season is 30 set by John Slaney in 1999/2000 playing for Wilkes-Barre/Scranton. He set the record in 49 games played that season.

“So cool. No one deserves it more. He’s a great guy, great to have in the room. We’re all really happy for him,” Danny O’Regan said when talking about the franchise record. “He’s probably on pace for 40 now so yea, he should get 40.”

Can Redmond break that as well? There’s 35 games left in the season to set a record that could last another 46 years.

Redmond wasn’t available for post game interviews.Â In the last minute of the game he played the puck behind his own net and went down to the ice in an awkward way on his right ankle. He was helped to the ice, the locker room, and did not appear for the three stars selections. He wasn’t available after the game as he was in the x-ray room with the team medical staff. There wasn’t much of an update after the game, will find out more on Thursday.

Ugh. Hopefully Redmond is alright. Awkward into the boards. Was slow to get off the ice, likely the reason he didn't come out for his 1st star. pic.twitter.com/ed1VgFYTdo

Zach Redmond scores his 17th goal of the season to tie the game 1-1. One more to tie the Amerks record for goals by a defenseman in a season! pic.twitter.com/ZNDKP8wIVn