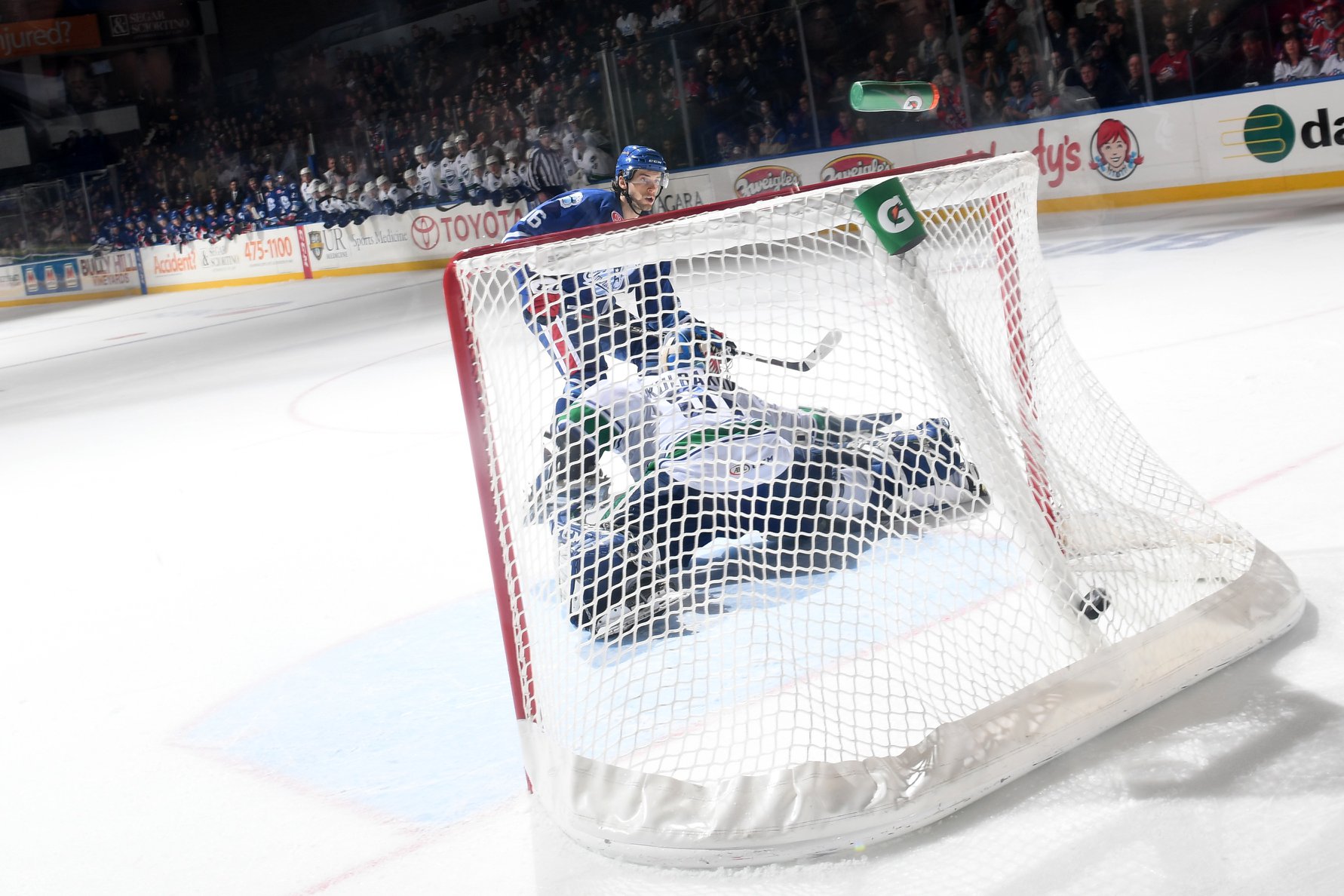 There’s often games where the team says one thing the morning of or day before a game and then the opposite happens. That wasn’t the case on Friday night when the Rochester Americans kept their feet on the gas pedal and it paid off in a shootout win over the Utica Comets.

CJ Smith had talked before the game about next guy up mentality in the sense that without their top goalie and top defensemen it’d be up to the next guy to step up. Matt Tennyson, Taylor Leier, and Jonas Johansson were those next guys up.

“It’s a team you don’t want to give up a point to but we found a way to win and that’s why we’re a first place team,” CJ Smith said after the game. “It’s a good win for the boys.”

Taylor Leier joined the Amerks after the Buffalo Sabres acquired him in a trade for Justin Bailey. A week later he’s the talk of the town leading the team to a shootout win.

“You only get one chance to make a first impression,” Taylor Leier said after the game. “I think you guys are going to continue to see my game grow.”

Wednesday night he scored his first goal with the team to give the Amerks a 3-0 lead (they ended up winning 7-5) and followed it up Friday night with the shootout wining goal over the Utica Comets.

Chris Taylor talked about other contributions from Leier saying,Â “He’s a big addition to our penalty kill that we’ve struggled early on in the year with. To add him to the lineup helps out a lot with his experience. Overall the way he works and what a good teammate he is already in our dressing room he’s just bringing our teammates that much closer.”

Taylor Leier is Ready for the Change of Scenery

The penalty kill was perfect having to kill off three penalties, one of which was a questionable charging call on Leier late in the second period. See for yourself:

Kulbakov went down like he was run over by a steam roller. Leier got called for charging. pic.twitter.com/Xem5J958F8

“My only mind set was, I wasn’t trying to hit him, I was trying to strip him of the puck,” Leier said after the game when asked. “It was an open net, he had the puck on his stick, and I was trying to get it and score”

Leier thought he was going to have to fight Tanner Kero after the incident but he said Kero didn’t want to go. Two minutes for charging, the team killed off the penalty, and Leier apologized to the bench afterwards. It’s doubtful anyone felt an apology was necessary.

“I don’t think so but that’s not my call,” Chris Taylor said when asked if he thought it was a penalty. “We could go every penalty and get a different opinion. It’s part of the game. We killed it off, and that’s the best part. Our penalty kill is improving and that’s very good for our team.”

Utica was controlling the pace of play through the first period and into the second period but it didn’t phase Jonas Johansson at all, he actually enjoyed it.

“I had a pretty busy first period. Always nice for a goalie to get into the game pretty quickly,”Jonas said. “For the rest of the game it felt like we took over more and more.”

Reid Boucher scored his 18th goal of the season at 4:36 of the second period with a quick wrist shot from below the hash marks. The Comets were pressuring in the offensive zone as they had the Amerks chasing pucks.

Speaking of penalties or lack of, Scott Wilson took a fall after a leg appeared in his path of skating. No call. Make your own decision.

How the **** did the ref not call this looking right at it?? Kulbakov gets away with one. pic.twitter.com/Bo7cFLd7Zo

The biggest and best hit of the game was delivered by Andrew MacWilliam. Carter Bancks immediately stepped up to challenge MacWilliam (even though it was a clean hit) and the two exchanged some punches. Taylor Leier was also mixed up with another Comets player which would have been a fight years ago but the automatic suspension for a second altercation eliminated the chances of that from happening.

During the second intermission Danny O’Regan talked about the message in the room and said it was to,Â “Keep playing the same way, keep shooting pucks, trying to hit them in the offensive zone, and eventually one of them was going to get through and capitalize.” That’s what happened at 9:34 when O’Regan tied the game at one with his lethal shot.

Brandon Hickey sent a pass to O’Regan to score his 17th goal of the season and tie the game at one. He’s also scored seven goals in his last 11 games.

Danny O’Regan a pretty humble player and simply said, “Sometimes the pucks just find the way into the net and it feels good.”

“I think he’s had one of the more consistent years of anyone,” Chris Taylor said when asked about O’Regan. “He scores big goals, really good on the wall, penalty kill, blocking shots, face offs, and he keeps getting better.”

Danny O'Regan scored his 17th of the season. TheREALsnipeshow. pic.twitter.com/rjiv0uPwyh

Reid Boucher scored again to give the Comets a 2-1 lead at 11:14 of the third period. Jack Dougherty was attempting to block the shot but in doing so screened Johansson. A quick wrist shot later and Boucher tallied his 19th goal.

Reid Boucher can snipe it too. Comets took a 2-1 lead here. pic.twitter.com/DuOeXRktTg

Late in the third period the Amerks called a time out with 2:16 left to play and a minute later they tied the game. Toby Petersen drew up the play and sent out five forwards with one defenseman. Jonas Johansson was on the bench. The defenseman on the ice was Matt Tennyson and that’s who scored the game tying goal. CJ Smith took a shot that was blocked, it landed near Tennyson’s skates and he sent a quick low shot to the back of the net.

“Our team has no quit, we always try to put ourselves in a chance to win a game or tie game,” CJ Smith said. “I thought we did a good job there staying composed at the end with a huge goal from Tennyson.”

As regulation ended it felt like the Amerks were lucky to get a point out of the game but by the time it was over it was an earned point by both teams.

The Amerks dominated the three on three overtime with multiple chances and missed shots. Rasmus Asplund had the best opportunity but shot the puck wide. He immediately slammed his stick against the glass as he circled around to get back into the play.

Jonathan Dahlen andÂ Adam Gaudette scored on the first two shots of the shootout for the Comets but they were unsuccessful on the next five attempts in the seven rounds.

“I really like shootouts and overtime,” Jonas Johansson said. “It’s fun and you have the big chance of being the hero which is what I like most about it.”

Danny O’Regan shot first and was stopped. Victor Olofsson and CJ Smith scored on the next two attempts. Wayne Simpson, Alex Nylander, and Kevin Porter were all stopped as well.

“I don’t even know what happened,” CJ Smith said with a laugh when talking about his goal. “I went to shoot and then he went down. I somehow got around him and scored. Closed my eyes on that one.”

Taylor Leier was the last Rochester skater to get an opportunity and it would be the game winner with a shot that sent the water bottle flying into the air.

Chris Taylor summed up the game saying, “I thought it was a great game to watch, even from behind the bench. It was exciting. Had everything into it. Big hits, obviously a fight, some big saves, overtime, shootout, couldn’t ask for anything better.”

The old barn had a great crowd that was entertained by a winning hockey game. That’s how Friday nights should be.

CJ Smith is so good that he took the birdbox challenge on his shootout goal. Said, "I don't even know what happened. I kind of blacked out. I went to shoot, he went down, somehow got it around him. I closed my eyes on that one." #Amerks #Sabres pic.twitter.com/0MYMBdpZ5u