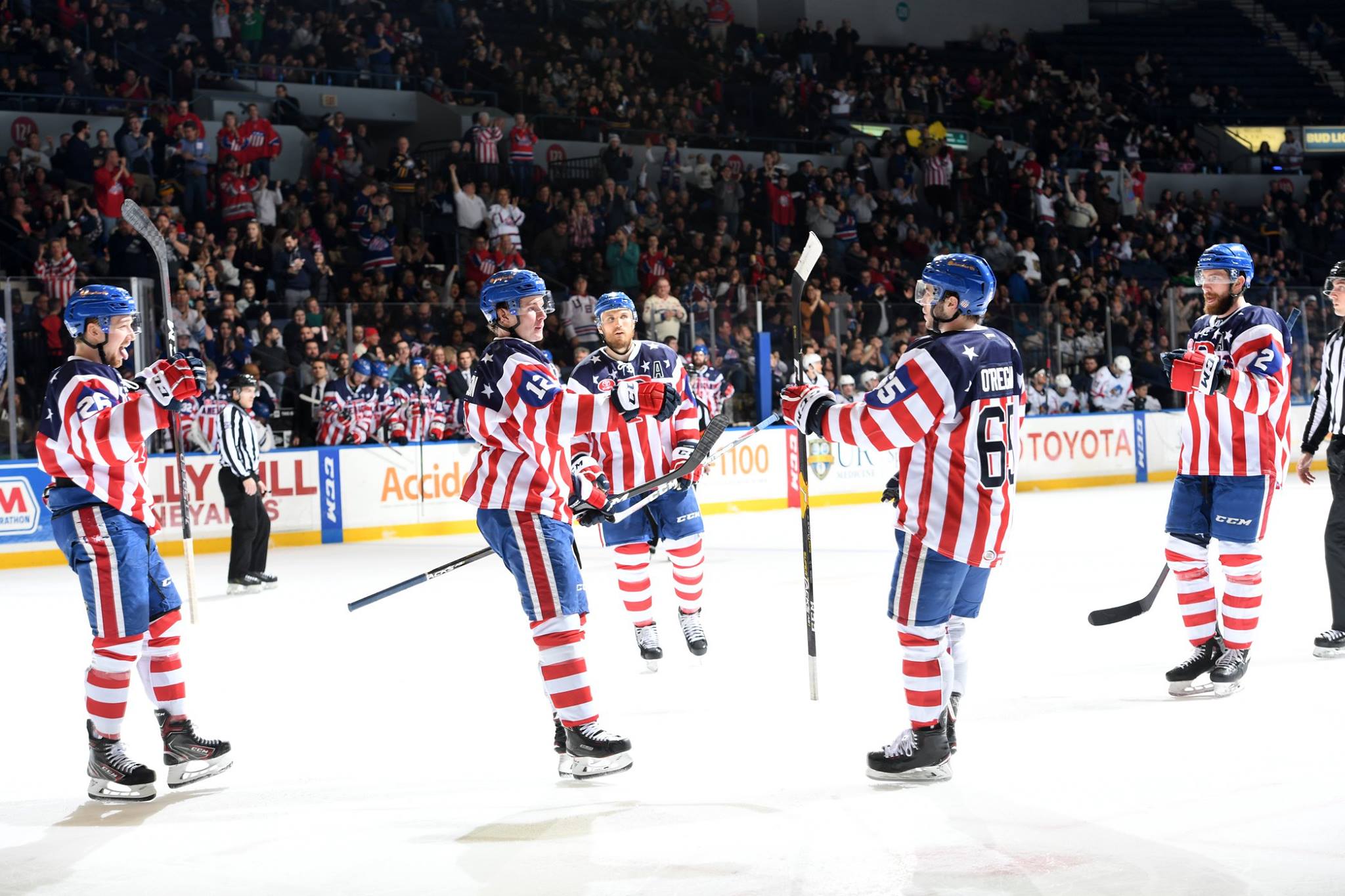 There’s times when everything goes better than expected and that’s what happened on Friday night when the Rochester Americans delivered a 7-1 defeat to the Springfield Thunderbirds while wearing the classic stars and stripes jerseys for Hall of Fame night.

Springfield and Rochester played each other once earlier in the season when Springfield scored seven goals in the second period. The game ended with Springfield winning 9-4 and embarrassing the Amerks on the road. Friday night it was time for revenge and that’s what happened with five goals in the third period for Rochester.

The night started with both teams on their benches for the Amerks Hall of Fame inductions to listen to Doug Janik (current Springfield assistant coach) and Steve Langdon give their speeches. Due to the ceremonies the game started a little later than usual but there wasn’t anyone on the ice that was going to complain.

Casey Nelson started in his first game since December but had a concerning moment within the first 30 seconds. He was hit and went throat first into the dasher boards and went to the locker room. The medical staff checked him out, no problem, just a little bit of a deeper voice now. After he said, “It woke me up a little bit.”

The first period was scoreless, almost even in shots, and both teams having to kill off two penalties each. It was physical game right from the start and as the game went on continued to favor the home team.

“I thought our defensive play was awesome. In the first two periods we gave up four chances, two of those were on the penalty kill,” Chris Taylor said when he was asked what he liked about the game. “Right there was a big improvement and dedication to our defense.”

Asked what he saw in the team Casey Nelson said, “We came together. Everyone did their jobs as the game went on and we made it a lot easier for each other.”

Scott Wilson scored the first goal at 8:12 of the second period redirecting a shot from Matt Tennyson into the net. Victor Olofsson earned his first of four points of the night with an assist.

Just over four minutes later Danny O’Regan and Rasmus Asplund put on a clinic along the boards on how to win the classic 50/50 battle that’s often spoken of. Danny O’Regan skated away with the puck behind the net and was able to deliver a perfect pass to Victor Olofsson in front of the net who buried a one timer.

“He won the battle on the board and kept skating with the puck all the way behind the net and an amazing pass to me,” Olofsson said after the game. “It wasn’t hard to score that one.”

When asked about the play Chris Taylor said, “He (Danny O’Regan) gets underneath guys hands there, spins off, and he does a really good job creating space for other players. Danny is very creative, he can see guys, he can hit guys in the slot, and makes that line go. All three of them together make that whole line. It’s not just one, two, it’s all three of them combined. They do different things and have played well all year.”

“We talked about it between the second and third that it was a zero zero game for us,” Chris Taylor said afterwards.

It only took 93 seconds into the third period for Victor Olofsson to score his second of the game on the power play with another assist from Rasmus Asplund.

A short 77 seconds later another goal was scored this time by Wayne Simpson from Kevin Porter and Matt Tennyson.

The 4-0 lead only 2:50 into the third period almost felt comfortable.

Springfield has the leagues best power play so when they had a five on three opportunity they weren’t going to hold back. It didn’t work out for them.

A pass to the point was intercepted and poked away by Danny O’Regan to Rasmus Asplund. As they went down the ice on a short handed two on one there was a pass attempt made by Asplund to O’Regan but it ended up being pushed into the net by Springfield defenseman Jacob MacDonald.

“I wanted to pass to Danny and try to get him on an open net but it bounced in,” Asplund said after the game.Â “I think that’s the goal I needed right now. I’ve been struggling a little bit with my goal scoring so hopefully they keep going in.”

Wayne Simpson gave a reach to give a puck a back handed whack as it entered the Amerks zone which sent the puck flying down ice. Victor Olofsson took off winning the race for the puck and scored 41 seconds after Asplund to put the Amerks up 6-0.

Defense leads to offense which leads to having fun.

“It was really fun. We started off playing the right way,” Olofsson said. “We played really solid defensively and that lead to good offense. We scored a lot of goals so that’s always fun.”

Asplund talked some more about the game saying, “Our line thought that Wednesday was our worst game of the year so we really wanted to bounce back and we really did so it was a lot of fun out there.”

There was one goal scored against Rochester but when you win by six it’s barely worth mentioning.

Scott Wedgewood had a lot of work on Wednesday night. Fast forward to Friday night and the team made it easier on him. He said,Â “I had a lot of time to think, talk to myself, sing some songs. Unfortunately a little knuckle puck got past me. I hadn’t played hockey in about 10 minutes so I was a little out of position.”

Burritos were on the mind of not only the fans but the team itself.

After the game Scott Wedgewood said, “It was nice to see Olofsson get free burritos for the fans. I might have to steal my girlfriends ticket.”

What he’s referring to is a promotion with Moe’s Southwest Grill that when a Moe’s hot player completes a hat trick everyone with a coupon gets a free burrito. If you’ve been to an Amerks game this season and have one of the handouts you’ll have a coupon on the back.

Victor Olofsson finished the game with three goals and one assist for his first professional hat trick. Unfortunately there was about as many hats on the ice as points.

Asked about the poor showing of hats on the ice the response from Chris Taylor was,Â “I know it’s free burritos though tomorrow!”

Highlights are better with some Joe Esposito – You're The Best Around as the soundtrack. #Amerks scoring 7 goals was a good time to give this a go. Credit @MiMiV4682 for the idea! pic.twitter.com/bD4TRsSvrR

Here’s the team highlights of the game below. Gifs and tweets will be added Saturday.