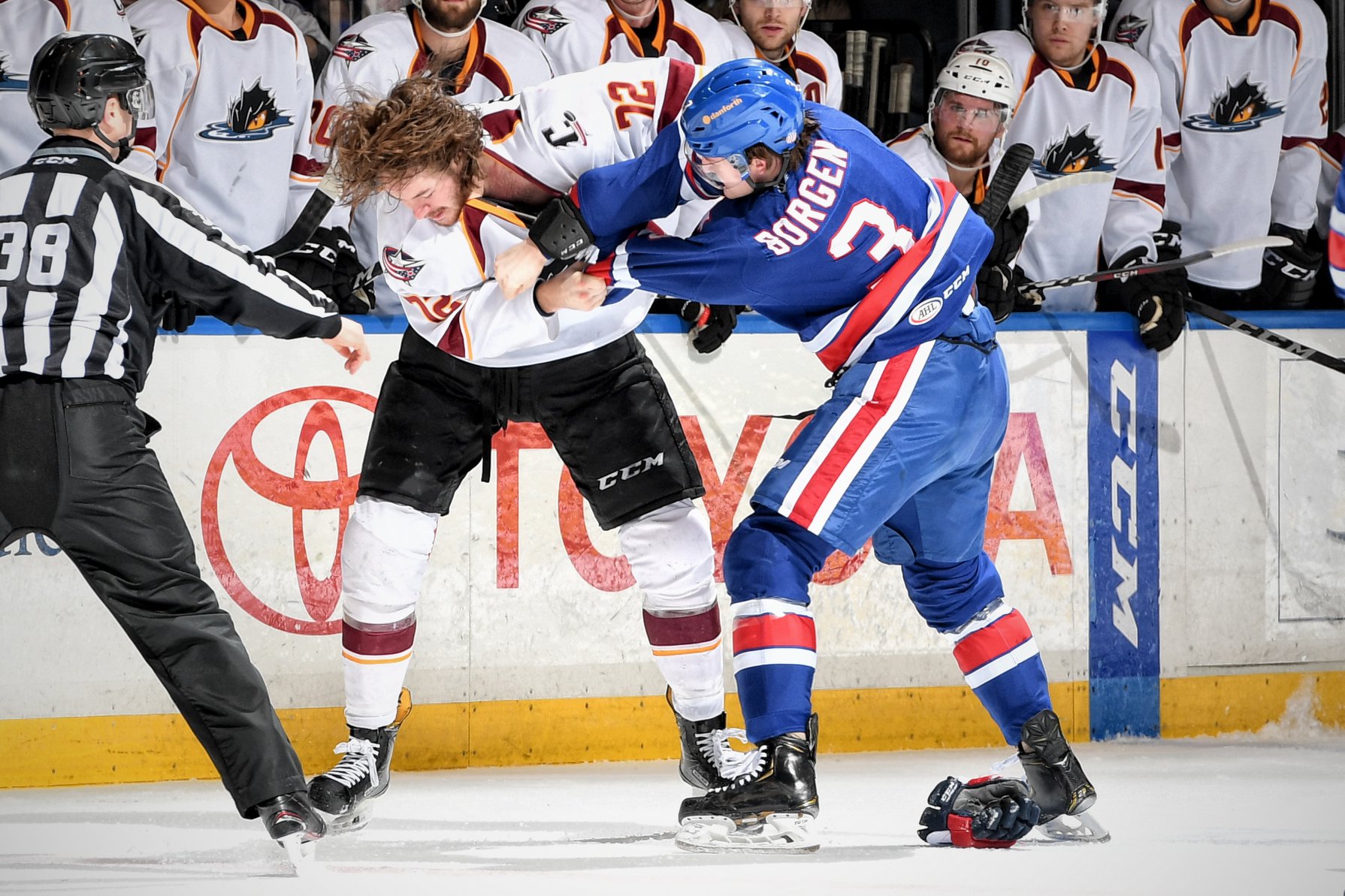 The Rochester Americans beat the Cleveland Monsters for the third time this season on home ice and the fifth time overall out of six games played on Wednesday night in downtown Rochester. They also beat them down in three different scraps. That was also the third straight win for this Amerks squad.

There’s a classic line out there made famous by Rodney Dangerfield when he said, “I went to the fights last night, and a hockey game broke out.” When it comes to the hockey game on Wednesday night that’s what many will remember more than the goals scored or the fact that it was the third straight win.

Being a tough team to play against was a mission for this Rochester Americans team coming into this season and game after game they’ve shown that they can be that team.

Zach Redmond returned after missing 11 games due to a lower body injury and it looked as if he didn’t miss a game. Redmond scored his 20th goal of the season only 2:45 into the game with his signature low shot. He would finish the game with 2 points (1G+1A) and a team high eight shots on net.

Paul Bittner scored a power play goal for Cleveland with 2:43 remaining in the first period to tie the game at one.

As the buzzer went off at the end of the first period the puck was sent out of the Amerks end by Kevin Porter and as he did so he was hit by Kole Sherwood and sent hard into the boards. Without hesitation Matt Tennyson was right on top of Sherwood to stick up for his captain and unleashed a number of punches along the boards. Cleveland started the second period with a four minute power play but the Amerks penalty kill was perfect. Tennyson had been given two minutes for roughing and two minutes for unsportsmanlike conduct.

The show started at 4:39 of the second period when Brett Gallant and Yannick Veilleux decided to square off. They acknowledged each other and in heavyweight fashion decided an extra two minutes would be worth it and removed their helmets as they dropped the gloves.

The puck was dropped after the above fight in the Amerks zone and within eight seconds Will Borgen didn’t hesitate in backing down from a big hit by Ryan MacInnis. There hasn’t been any doubt that Borgen is a tough defensive defenseman to play against but this certainly increased his value. The scrap speaks for itself.

Once the fun was out of the way the teams went back to playing hockey and while at times it wasn’t the cleanest game and also undisciplined the Amerks continued to push the Monsters with a physical style of play. The line of Remi Elie, Taylor Leier, and Andrew Oglevie was dominant again for the second straight game.

Cleveland took their only lead of the game when Tommy Cross scored a power play goal with 2:31 remaining in the second period. There was a big mess in front of the Amerks net with bodies everywhere and Scott Wedgewood taken out of the play by his own players. As Wedgewood scrambled to regain position the Monsters were able to score.

Only 49 seconds later Danny O’Regan scored his 18th goal of the season with a perfect redirect off a Zach Redmond shot from the point. Victor Olofsson had a secondary assist on the goal. An advantage of having Redmond back in the lineup is that teams aren’t sure who to focus on. As the puck was cycled between Redmond, Olofsson, and O’Regan it was only a matter of time before someone found the shot. Redmond lined up his shot and O’Regan skated across the slot with perfect timing to redirect the puck over the shoulder of Berube.

The line of Elie, Leier, and Oglevie scored a goal at 6:15 of the third period which would turn out to be the game winning goal. Oglevie had an assist as he sent Elie down ice with the puck. Elie muscled his way to the front of the net and it appeared as if he forced the puck into the net but it popped up and over the pad of goalie Jean-Francois Berube and Leier tapped it in as he was pushed down to the ice.

A one goal lead going into the final five minutes of the game created some anxious moments but Scott Wedgewood was at his best with key saves and Wayne Simpson scored an empty net goal. The Amerks were setup to stop the Monsters dump in of the puck and Wayne Simpson was able to gain possession as Scott Wilson was sent to the ice.

The Amerks won 4-2 and have reached 32 wins which is only five less than last season.

The fights are what will be remembered from the game but Scott Wedgewood was a key part of the game and earned his 19th win of the season with a 29 save night.

Last season the Amerks didn’t have any 20 goal scorers which is the bench mark for goal scoring in the American League. Redmond now has 20 through 42 games played.

Victor Olofsson is only one away with 19 through 50 games played.

CJ Smith, Danny O’Regan, and Wayne Simpson are each at 18.

Taylor Leier has 13 and with 23 games remaining in the season it’s possible he could reach that bench mark.

The game in gifs as they were Tweeted:

Tennyson gots 2 mins for roughing and 2 mins for unsportsmanlike at the end of the 1st for sticking up for his captain. pic.twitter.com/RyvWnSTEye

#Amerks created a mess in front of Wedgewood and Tommy Cross put the Monsters up 2-1. pic.twitter.com/h69yd3UHmZ

Great puck movement on the PP. O'Regan from Redmond and Olofsson. pic.twitter.com/kAMVjyANVq

Correction… Taylor Leier scored this one for his 13th of the season! Puck popped up and he got a piece of it. pic.twitter.com/1bfqWeDGQf

Wayne Simpson scored his 18th of the season and the Amerks gain the 4-2 lead! pic.twitter.com/30CCMz35g6