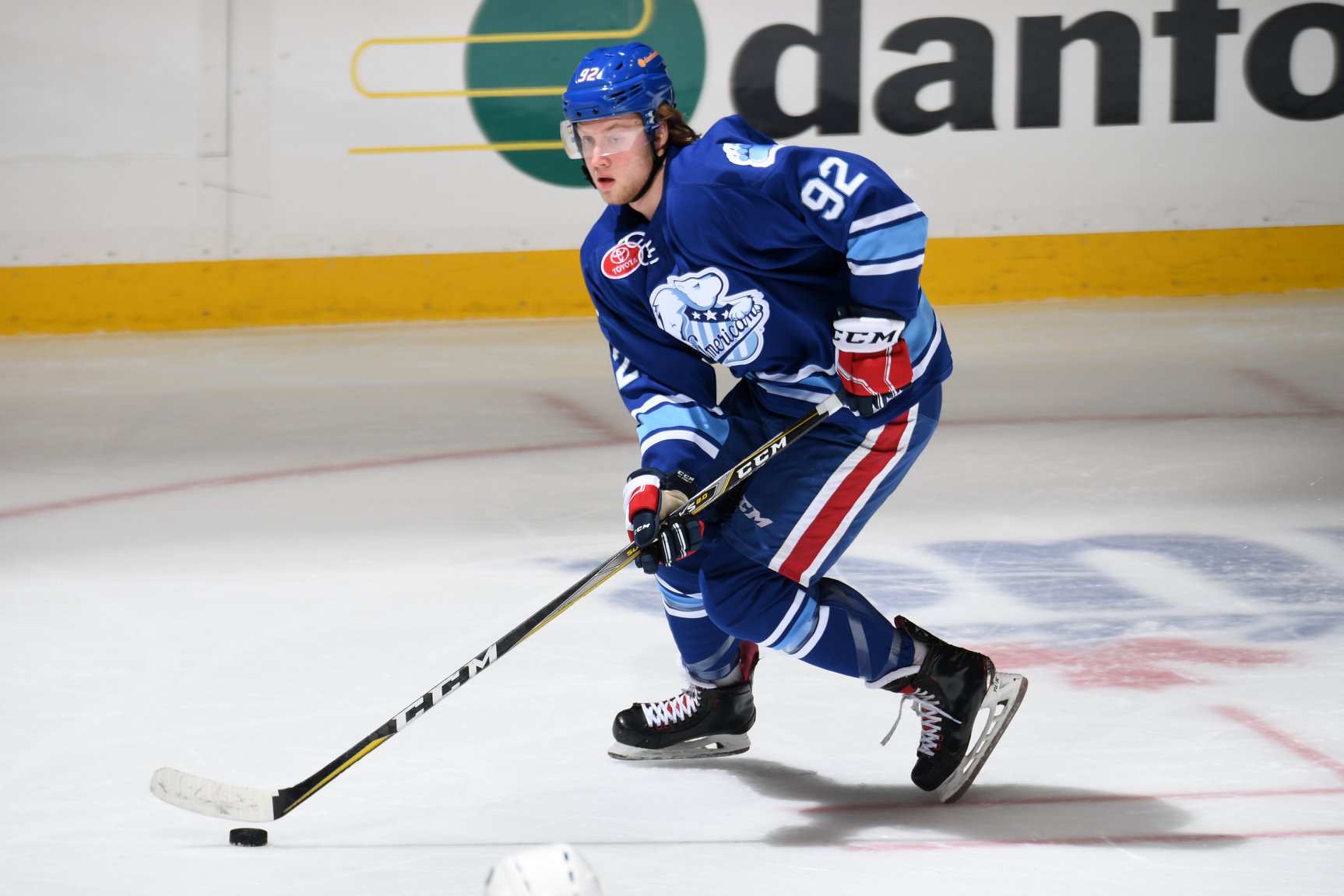 After missing the last eight games with an upper body injury the Rochester Americans will have Alex Nylander back in the lineup tonight on the road against the Utica Comets. TheÂ Buffalo Sabres first round draft pick has played in 42 games this season with results that have gone downhill as the season has gone on.

One of the lines often used by coaches and management was that he was only 18 years old. Then it was heâ€™s only 19 years old. And then it was he just turned 20 years old. In eight days Nylander will be turning 21 and is playing in his third professional season.

In early December when he had played in 21 games I wrote about how Alex Nylander was playing a confident game. He was averaging almost a point a game with 17 points (6G+11A). They were quality points as well. He was creating chances along the walls winning puck battles, going to the net, and overall playing more of a physical game. Defensively his back checking was also noticeable.

Since then the production has faded.

Here’s stats through the first two seasons as well as the 42 games this season split in half:

Zero goals and 2 assists in his last 10 games before the injury. Only 2 goals and 3 assists in the previous 11 games. That’s seven points in 21 games. The injury that had him out of the lineup for the last eight games didn’t slow down any momentum but hopefully it gave him an opportunity for a fresh start.

Ask anyone about Nylander and you’ll get a different reaction. Management and coaches will still say that he’s young and developing at the right pace. Prospect writers still place him high on the depth charts. Fans that have watched prospects in Rochester for decades have given up on him, they’ve seen this type of player for decades. Sabres fans think that he’s being wasted in the American League and will prosper in the NHL. Those are all generalized statements but sum up the various view points.

This site covers the Rochester Americans as a hockey team and the players who play for them. I write about how players are playing during the season, not just where someone falls on the depth charts. At this point of a season development should be trending up, not down.

To put things into perspective compared to other Sabres first round picks here’s a look at the last 15 based purely on NHL games played.

Seven started in the NHL.

Nylander has only played in seven NHL games through his first three seasons. Out of the last 16 first round draft picks by the Buffalo Sabres only two players have played in less at this point. Those two players areÂ Dennis Persson and Marek Zagrapan, they didn’t play in any. Persson was 22 in his third season. Zagrapan also turned 22 in his third season. Nylander is still a year younger than both of them.

Based on games played and production the best comparison to all of those players would be Marek Zagrapan. Here are the stats from three American League seasons for Zagrapan. The first two were in Rochester, the third was in Portland. The assist totals are comparable between the two players. The goal scoring isn’t.

On a points per game basis they’re almost equal.

At the end of the article written about NylanderÂ playing with more confidence after 21 games these words were written – if anyone is still soured on his play based on the first two seasons youâ€™ll want to leave that behind and watch him play with a fresh set of eyes.Â The start of the season was different. The 21 games that followed weren’t.

A top ten first round draft pick that is about to turn 21 years has 23 regular season games remaining to prove himself in his third professional season. The Rochester Americans have been in first place for a majority of the season and are on a direct path to the playoffs. Nylander was ineffective in three playoff games last season, even found himself at the end of the bench in the third period of game two.

After a recent practice Nylander was asked what his goals are for the rest of the season an he answered, “Obviously my goal is to get to the NHL. My main thing is playing good, getting up there, and obviously staying up there and not coming back down here.”

So, what has held him back?Â Is he still young? Will a 4th season be his breakout year? Is he too soft? Is he a bust? Is he held back by the American League? Is he injury prone? Does he need a change of scenery? I have watched almost every professional game he’s played and after only seven NHL games and 158 AHL games those are all valid questions.

The remaining games of the 2018/2019 season and into the playoffs will finish telling the rest of this story.