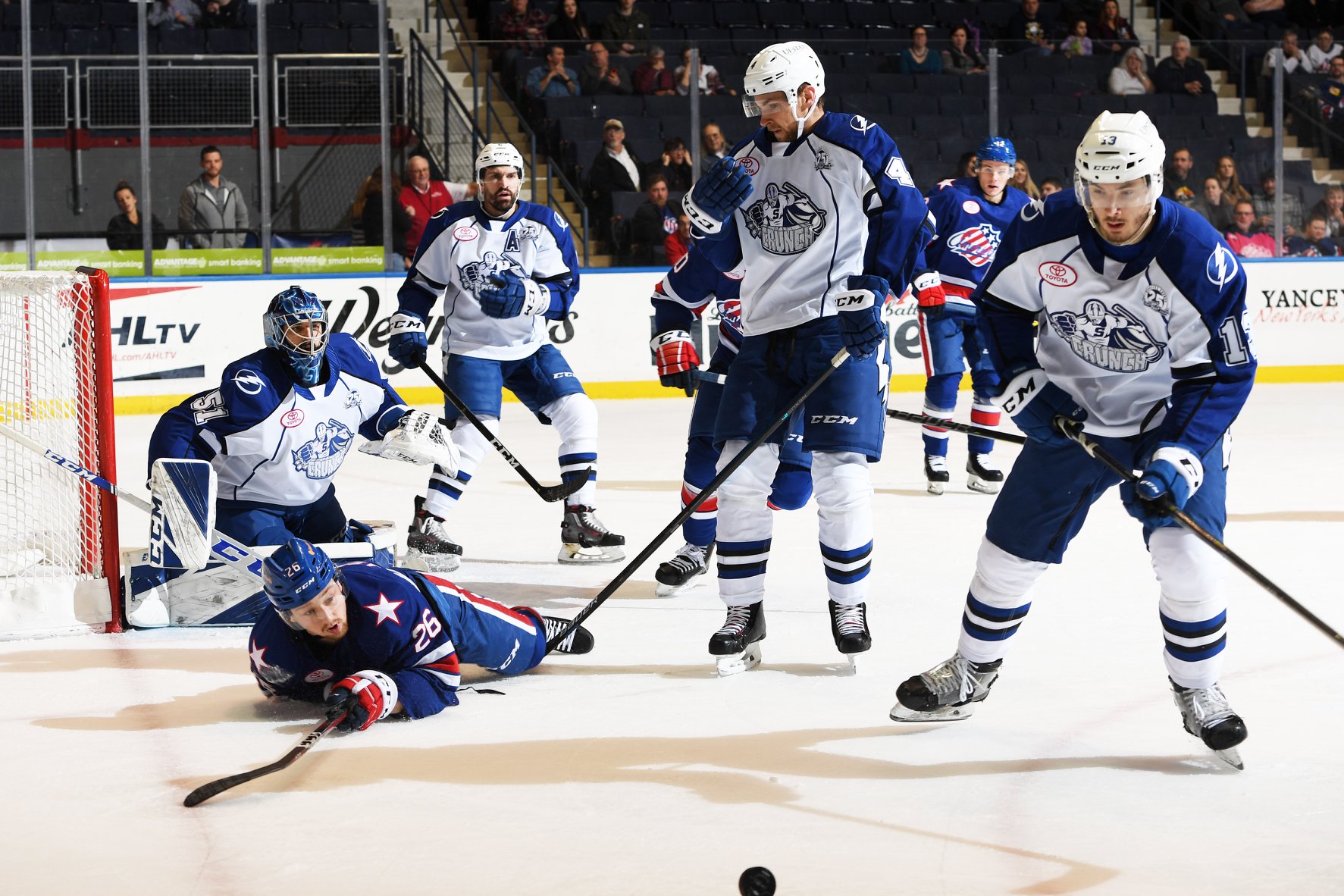 The game plan appeared simple for the Syracuse Crunch, get the Rochester Americans to take penalties, and then go to work on the power play. It worked. The Crunch scored three power play goals on Sunday afternoon in a 4-1 win. They had also scored two power play goals during the game Saturday night.

There were some questionable calls, there were no calls, and of course avoidable calls. It was an inconsistent game called on both teams but the loss can’t be placed solely on the officiating as some Amerks penalties were avoidable. These back to back games were a lot different than the games in February when the teams were allowed to simply play hockey. Once the penalties settled down in the third period it was too little too late. The Amerks appeared drained and Syracuse was able to hold them off for the win.

Syracuse took a 1-0 lead early in the first period with a five on three power play goal. Andy Andreoff found himself alone in front of the net to shoot the puck high on Wedgewood. Matt Tennyson and Taylor Leier had gone after the puck along the boards which left him wide open.

Immediately after the goal was scored a bench minor was issued to Dalton Smith for unsportsmanlike conduct. The Rochester penalty kill was able to kill off that penalty.

“We just didn’t have a very good start,” Chris Taylor said. “We were in the penalty box too often, and the momentum was on their side.”

A second power pay opportunity in the first for Rochester was a dud with no real chances.

The Rochester penalty kill had to go to work again when Andrew MacWilliam was called for boarding. Just like the game on Saturday night the refs decided this was a game to call every penalty. 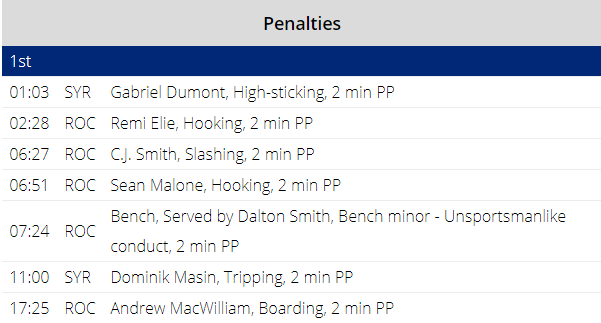 Alex Nylander opened the scoring just 3:57 into the second period with his 10th goal of the season to tie the game 1-1. Taylor Leier and Matt Tennyson worked the puck up the boards, both earned an assist, and Nylander let a big shot go from up high that made it into the net.

Syracuse regained the lead with another power play goal at 6:40 of the period when Alex Barre-Boulet positioned himself for a one timer off a pass from Carter Verhaeghe. Will Borgen was serving a roughing penalty for going after Cory Conacher who had given Scott Wedgewood a slash after a shot on net.

“He slashed our goalie. We’re here to defend each other,” Chris Taylor said after the game when asked about the penalty. “I’m not upset with Borgen, I’m upset that we didn’t kill it off.”

When Will Borgen was asked if he thought a slashing penalty was coming he said, “They were calling penalties all night but I got the retaliation on there so it’s on me.”

Conacher either thought he was going to be called for the slash and didn’t want an extra call or knew it wouldn’t be called and took the power play. That seemed to be the turning point of the game.

Taylor also said, “We have to make sure if we’re taking those hard penalties we have to kill them off.”

It took less than six minutes for Syracuse to score another power play goal at the 12:00 mark of the period. Remi Elie was in the box for a questionable interference call and Syracuse took advantage of it. Mitchel Stephens was able to get a stick on the puck to give Syracuse the 3-1 lead.

Here’s the break down of penalties from just the second period.

The game settled down in the third period as both teams probably realized they had to stay away from each other or risk a penalty. There was only one power play and that went to Rochester just 25 seconds into the period.

Rochester managed to shoot the puck 17 times atÂ Martin Ouellette but very few of those generated the much needed second or third opportunities. Syracuse limited the quality of the shots and weathered the period. That was only the third American League game of the season forÂ Ouellette.

The focus on the game came down to special teams but Chris Taylor didn’t want to blame the loss on the penalties. He said,Â “We’re top five and top seven in power play and penalty kill and playing against one of the top teams in the league. We’re going to have those games, we have to find ways to beat those good teams with the power play and PK.”

Overall, the dominant team performance by the Amerks on Saturday night seemed taken off their game due to all the special teams work. Through nine games so far this season Rochester still leads the season series against Syracuse with a 5-2-1-1 record. The teams will play again three more times in April.

The week finishes with two big road wins followed by a disappointing home loss. Finishing the week with four out of six points is ok but the team still expects more from themselves.

When asked what a positive from the game was Taylor said, “The positive is the five on five play, we had more chances than them. We just took too many penalties and they capitalized on their power play.”

Rochester will get back to work this week and prepare for a three in three next weekend with a game against Bridgeport and two versus Binghamton. They’ll be home on Friday and Sunday afternoon.

The game in gifs as they were Tweeted:

Crunch get the 5 on 3 power play goal and take a 1-0 lead. pic.twitter.com/fOhBy1rFm8

BIG shot from Nylander on this one! Great play stopping it from leaving the zone and then let it fly. pic.twitter.com/xvLRMlXhIx

2nd PP goal of the game for Syracuse, 4th in two games. They take a 2-1 lead. Alex Barre-Boulet scores this one. pic.twitter.com/Metui3EM1m

Borgen had taken offense to the extra tap that Conacher gave Wedgewood. pic.twitter.com/6N8pmI2Dw0

Penalties are killing the Amerks. Crunch scored again. That's the 5th PP goal for them since yesterday. 3-1 lead for them. pic.twitter.com/1PvUKmHuzc

Camera person didn't even bother to show it go down ice. Can't blame them. pic.twitter.com/GNLnh4VyAN