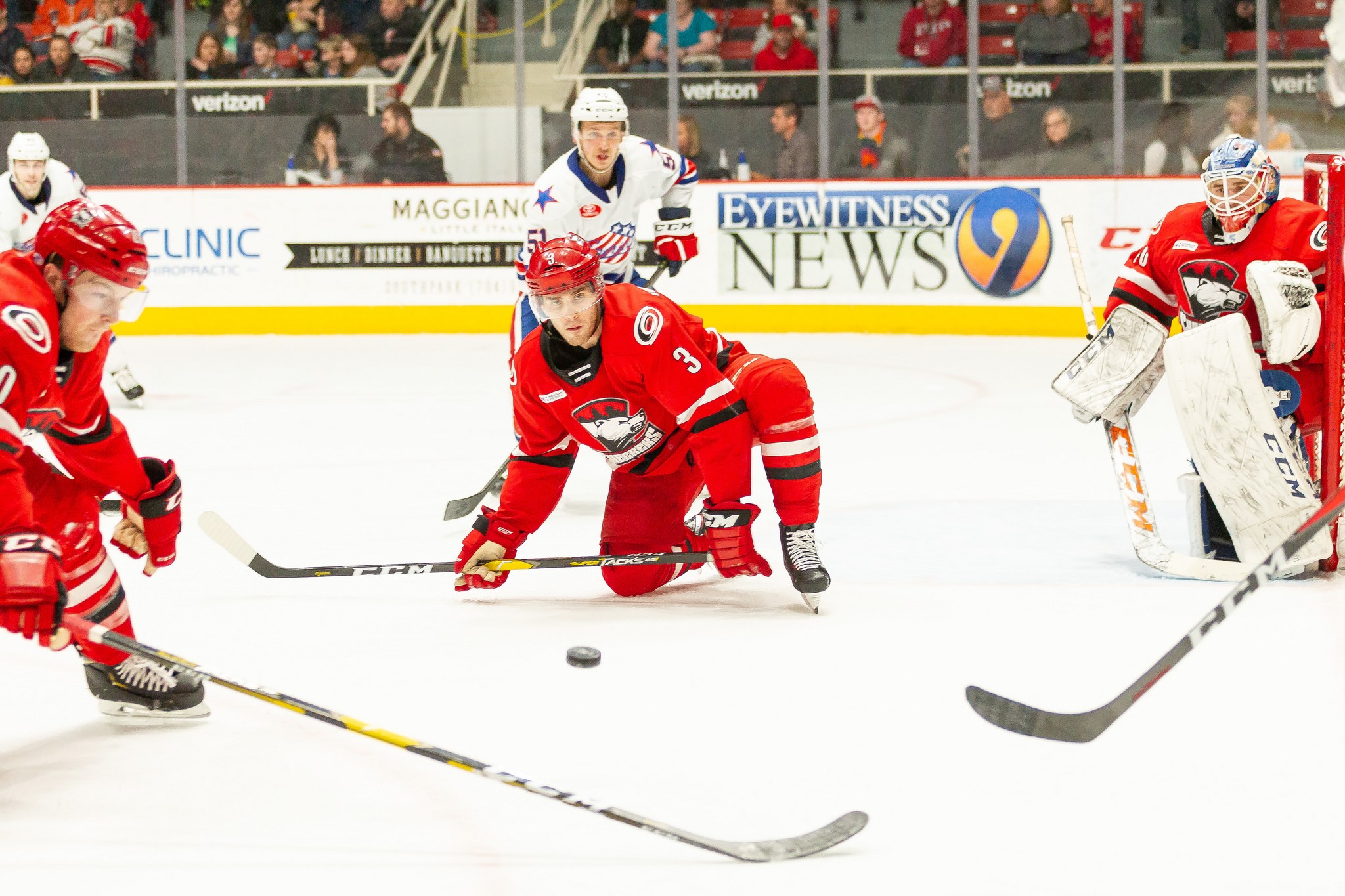 The Rochester Americans are a good hockey team but the Charlotte Checkers are better and it showed this weekend. The Checkers won 3-1 on Saturday night and swept the weekend with back to back wins over the Amerks.

Three things come to mind in summarizing the loss – an offensive zone turnover, a bad third period penalty, and then the power play failing to score on nine opportunities. The nine power play opportunities stand out more than the other two.

Charlotte scored first with 31 seconds left in the first period when Julien Gauthier created a turnover at the red line and went one on one with Scott Wedgewood and was able to beat him low.

Kevin Porter tied the game at 2:49 of the second period on a loose puck that CJ Smith was able to pass up front from the behind the net. CJ had started the play with a rush down the right side and shot the puck wide. Zach Redmond stopped the puck behind the net where CJ was able to pass it out front. That was the 29th assist of the season for CJ Smith and 28th assist of the season for Redmond.

Bobby Sanguinetti scored what would be the game winning goal at 11:40 of the second period as the Amerks were caught scrambling in front of the net.

Like Friday night, the Amerks weren’t out of the game but chances only take you so far. CJ Smith had the best opportunity near the halfway point of the third period but couldn’t put enough on a shot to beat Dustin Tokarski.

A Matt Tennyson interference call gave Charlotte a power play chance and they were able to do what the Amerks couldn’t do which is score. Aleksi Saarela found himself near the face off circle with enough time to pick his shot and beat Scott Wedgewood.

Back to back losses sends the Amerks on planned two days off before heading into the final stretch of the season. Amerks play home next Friday March 22 vs the Cleveland Monsters.

A few other notes…

Will Borgen played another tough and physical game. He was mixed up twice with Clark Bishop of the Checkers. Once at the end of the first period when they traded some punches at the buzzer. A second time when Borgen took offense to a low hit delivered on Lawrence Pilut. Borgen didn’t hesitate to skate in and stick up for his teammate.

Losing back to back games and being outscored 7-1 sounds like a blowout but going into details there’s ways to see how the outcome could have been different in just a few plays. There wasn’t a time this Rochester team looked like they weren’t interested or started playing on their heels as the saying goes. The outcomes didn’t result in wins but if the Amerks ever have to play the Checkers again (which wouldn’t be until the conference finals) they’ll have a better idea of what they need to do.

Rochester is still a really good hockey team and the types of losses these were can be debated. There’s 12 games remaining in the regular season to prove they’re not just a playoff team but that they’re an elite playoff team.

Amerks Lose 4-1 against the Checkers

Turnover at the red line result in Gauthier giving the Checkers a 1-0 lead. pic.twitter.com/oMhVPfoyf3

Borgen doing some bashing! Traded some punches after a pileup down on the ice as well. pic.twitter.com/6UnbyU7ZKJ

Amerks with some finishing ability and tie the game at 1! Kevin Porter from CJ Smith and Zach Redmond. pic.twitter.com/2GHoetKfNB

No hesitation for Borgen. End of the 2nd and Bishop continued chirping with Borgen. pic.twitter.com/knvPDNaVIJ

Checkers have that force field setup again. CJ Smith takes it to the net but can't get enough on it to force it through. Story of these games, chances. pic.twitter.com/57PRgjWFIy

Saarela scores a PP goal for the Checkers, something the Amerks can't do. They lead 3-1. pic.twitter.com/CT7WYpdpE6