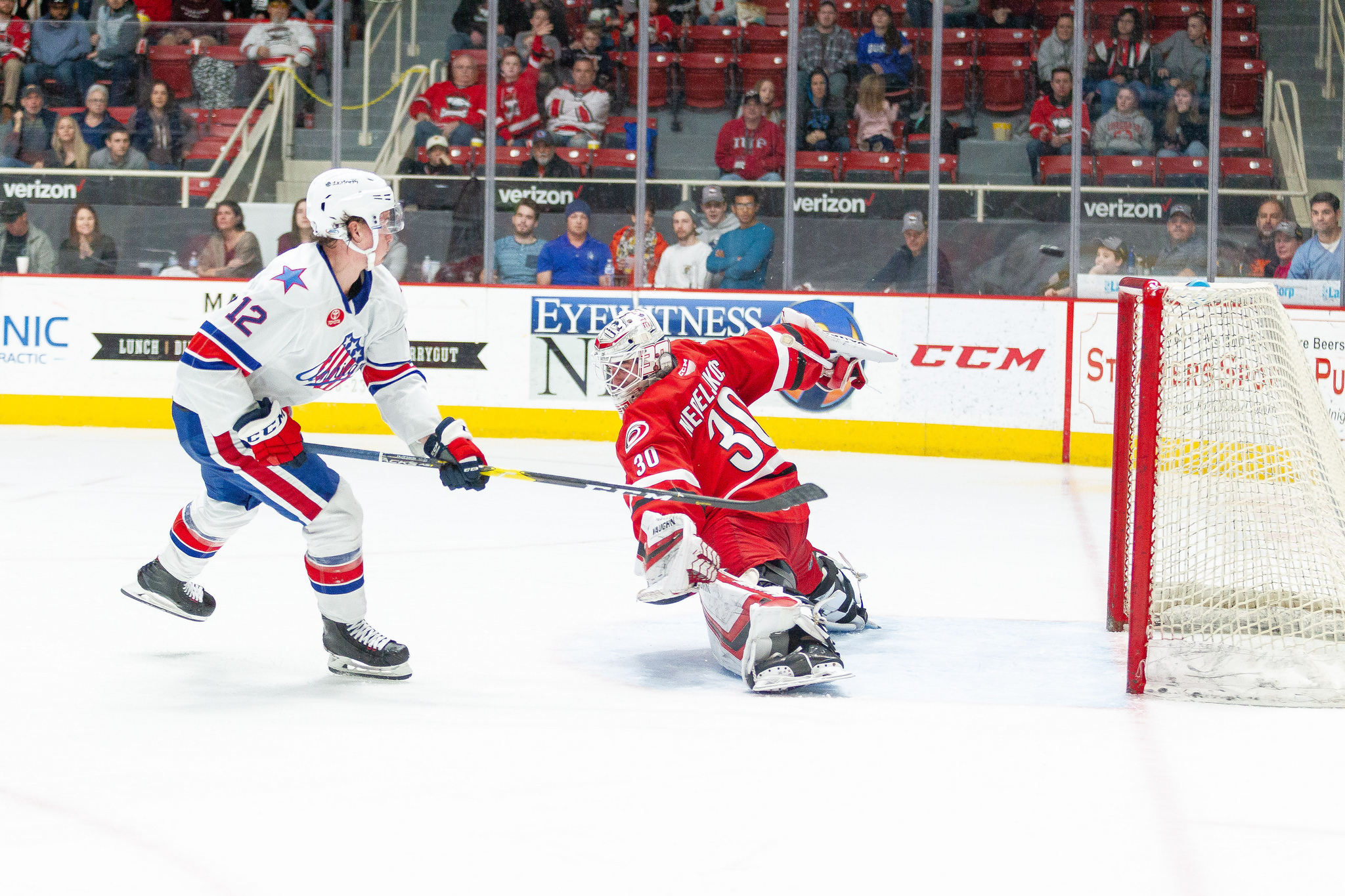 If chances could earn at least a point in the standings the Rochester Americans could have earned one against the Charlotte Checkers on Friday night. Unfortunately they don’t. The Checkers scored four goals to defeat the Amerks by a 4-1 score and continue to be the number one team in the American League.

Charlotte scored two in the first but it’s not like Rochester wasn’t without chances. Zach Redmond carried the puck in on a three on one but was stopped. Victor Olofsson had a one timer opportunity butÂ Alex Nedeljkovic saved that one as well.

Chances only go so far. In the Middle of March teams need goals and wins, not chances.

Martin Necas carried the puck in, split MacWilliam and Dougherty on a give and go, and was able to score the first goal of the game redirecting the puck past Wedgewood.

Aleksi Saarela gave Charlotte a 2-0 lead off a one timer that Wedgewood was likely screened on. Kyle Criscuolo had been called for cross checking and gave the Checkers a power play chance.

It only took 62 seconds into the second period for Charlotte to take a 3-0 lead. Patrick Brown scored the goal with an assist toÂ Trevor Carrick. The Checkers were doing what the Amerks couldn’t do, get the goalie moving work the puck down low.

As the game went the Amerks couldn’t bury a chance and it didn’t help that they spent a lot of time in the penalty box.

CJ Smith missed a wide open net after the puck took an odd bounce off the back wall.

Victor Olofsson was stopped on a breakaway as he attempted his back hand that often goes in.Â The featured picture paints the story of the game for Rochester. You can see the puck going just over the cross bar on the back hand.

Kyle Criscuolo had a breakaway but was stopped as he got too low and didn’t have much on the shot.

Two goals had been waived off in the third period, one for each team. Charlotte scored but it was waived off after there was contact called on Scott Wedgewood. Rochester had a goal waived off when Eric Cornel scored but there was a hand pass by CJ Smith just prior. Refs made the right call on each play.

Lawrence Pilut, Zach Redmond, and CJ Smith had additional chances in the third period but couldn’t find an opening to beatÂ Nedeljkovic.

Rasmus Asplund ruined the shutout forÂ Nedeljkovic scoring a power play goal with only 72 seconds left in the game. Danny O’Regan earned an assist on the goal. Too little too late but they finally found a way to get a puck in the net.

An empty net goal with seven seconds remaining by Patrick Brown sealed the win for the Checkers.

Scoring chances are great to know it wasn’t a total blow out but when you lose 4-1 it’s still a loss. Rochester had a 29-22 advantage in shots but couldn’t find the net. Too many penalties and a power play that couldn’t much going were the difference makers overall. It’s a loss but it wasn’t a blow out.

Rochester had the chance to tie Charlotte for the leagues best record but the loss and a Syracuse win puts them into second place in the North Division.

Starting lines in the game…

Game in gifs as they were tweeted:

Big save for Nedeljkovic on Olofsson!! That goes in 12 out of 13 times. pic.twitter.com/gHe035bjEW

Martin Necas splits the defense and puts Charlotte up 1-0. pic.twitter.com/mBJwkkYMzC

Checkers take a 2-0 lead on the power play. Aleksi Saarela scores this one. pic.twitter.com/g32C31YQWF

We're gonna have to call the cops again pic.twitter.com/FJTJIcVfVP

That's not the way to start a period. Checkers take a 3-0 lead. Patrick Brown scored that one. Trevor Carrick has assists on all three goals. pic.twitter.com/VLnzgguNkb

Olofsson dumped the puck in, took an odd bounce but CJ put it just wide. Chances are there, have to bury them. pic.twitter.com/EgzQbMEfJR

Olofsson has been stopped on the one timer and now the back hand. He might have to find a new move for this game. pic.twitter.com/uuCGmXvseA

BIG glove save by Wedgewood!! pic.twitter.com/WJsyf83FtL

Credit for CJ making that attempt. Could've caught a break where someone didn't see it. Hand pass, no goal. pic.twitter.com/pbGx0iIwmy

Rasmus Asplund ruins the shutout for Nedeljkovic with a PP goal! Charlotte still has a 3-1 lead. pic.twitter.com/KmDBjtmYiC

Patrick Brown gets an empty netter and the Checkers win this 4-1. Game over. pic.twitter.com/5i8DCSVM4U