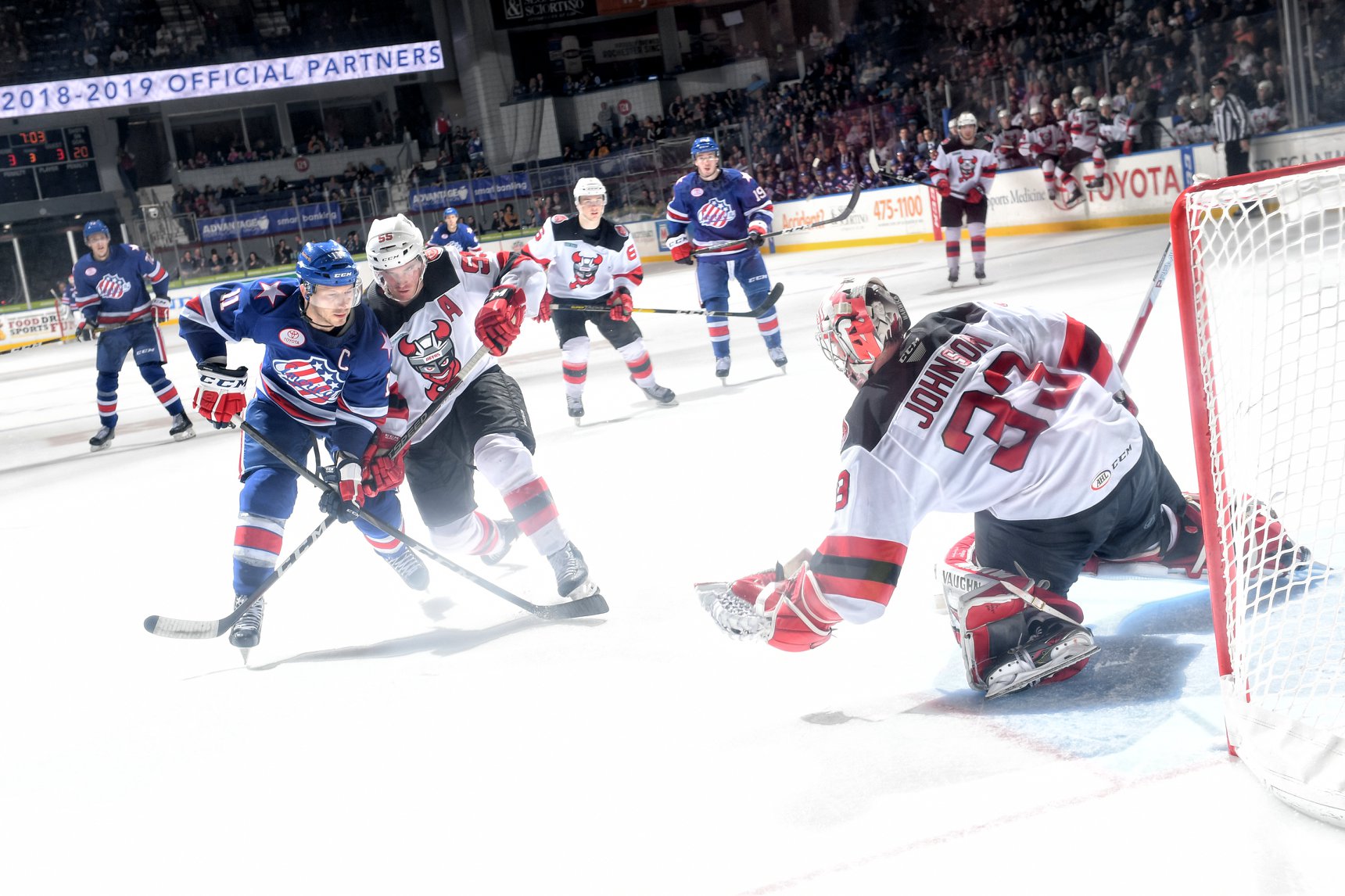 The Rochester Americans have talked about winning the North Division title all season and Friday night that opportunity likely slipped away from them on home ice. Again. A path to winning the division title was simple – win three straight and it’s theirs. But yet again they played a bad game on home ice in front of a big crowd. The end result was a 4-3 loss in overtime to the Binghamton Devils – a team that was eliminated from the playoffs a long time ago.

After the game Rasmus Asplund said, “I think we really want to show our home crowd that we’re going to be a good team. Maybe we try too hard sometimes. I think we play a little more simple on the road. We need to adjust that and get adjusted to the playoffs.”

“We have to get ready for the playoffs. That’s not getting ready,” Chris Taylor said after the game. “The second period wasn’t good enough. We keep playing like that and we’ll be out in three straight.”

The playoffs start in a week.

Based on the way this season has gone the Amerks play a bad game Friday night followed by an impressive bounce back game Saturday night.

“It’s disappointing how we’re playing at home. I’m upset about it,” Chris Taylor said after the game. “We shouldn’t be playing better on the road. We should playing the same way everywhere we play. I don’t know what it is. We try and do different things. We try everything we do on the road here. We try and change things up. For some reason we’re not clicking all three periods.”

I’ve talked to Chris Taylor enough to know he’s genuine when he says that it’s disappointing and he’s upset about it. That doesn’t change the results of the game but it’s not him simply saying the right things.

There’s a scenario where the Amerks can still win the North Division but the concern will remain that they play poorly on home ice. Zach Redmond wasn’t concerned this week when I asked him about the home ice record saying the playoffs are a new season.

You could say that Danny O’Regan was slashed on a short handed breakaway in overtime. You could say there was a line change that should have resulted in too many men against Binghamton. A Binghamton Devils skater was definitely off sides before they scored the overtime winning goal. There are no challengers in the American League.

If the Amerks had played better in the second period those things wouldn’t have mattered.

After a slow start to the game the Amerks showed life in the last five minutes of the first period fueled by goals from Will Borgen and Victor Olofsson.

Will Borgen shot from the side wall, the puck hit the back wall, and it went in off the back skate of Binghamton Devils goalie Cam Johnson. Kurt Gosselin earned his first professional point with an assist on the goal.Â Just over two minutes later Victor Olofsson scored his 28th goal of the season with assists to Kyle Criscuolo and Will Borgen. A text book play with Borgen getting the puck to Criscuolo, and then Criscuolo spotted Olofsson breaking out and delivered a perfect pass. Olofsson went back hand and scores almost every time on that move.

And then that second period happened.

The Amerks may have caught a break in the third period when Rasmus Asplund scored to tie the game at three just 1:55 into the period. The score sheet has it listed as a power play goal. The Devils penalty was called at 19:49 of the second period. The math doesn’t add up.Â Danny O’Regan and Taylor Leier had worked the puck on the boards, Leier sent a centering pass to Asplund in front of the net and he scored his 10th goal of the season.

There were breakaways in the game, there were shots that went wide, and there were passes instead of shots. Everything goes back to the first goal against that Wilcox would like to have back. That’s when the wheels fell off. This team has come back from deficits before to help their goalie out but that didn’t happen this time.

After the game Will Borgen talked about Saturday night against Syracuse saying, “We have to play every shift like it’s a playoff game. We can’t take shifts off like we did in the second. That’s how they came back and ended up beating us tonight.”

In overtime Taylor Leier was called for tripping with 1:48 left on the clock. His stick was between the legs of Ryan Murphy.

Eric Gryba took a shot from the blue line in overtime, Wilcox made the initial save, Nathan Bastian picked up the loose puck and scored.

There are no off sides challenges in the American League. It was a good goal and Binghamton won.

Kevin Porter talked about the next two games being important saying,Â “To prepare for playoffs. Get our power play clicking, get our penalty kill going, and get everyone on the same page. They’re just like scrimmages getting everyone ready for the next season.”

Maybe winning the division title wasn’t as important as some made it seem.

Chris Taylor was asked if players are anxious to get to the playoffs and he said, “It doesn’t matter. There’s a process. We’ve talked about it all year. To me it’s disappointing that it’s fan appreciation night and the way we played in the second period. That bugged me the most.”

“I think a lot of it is that we try to make that extra pass. We don’t play simple hockey,” Taylor said when asked about the way they play at home. “There’s a couple turnovers, all of a sudden you’re chasing, and then you’re tired.”

And then you lose and over eight thousand fans in attendance are disappointed again. After 38 regular season home games the Amerks finished with 21 wins and 17 losses (21-14-2-1). On the road the Amerks have 24 wins and 12 losses (24-8-3-1) with two games remaining.

On a season level they’re only three points out of the division title going into the last two games of the season. They’ve been a top five team all season. There’s a lingering question, is home ice a disadvantage going into the playoffs? We’ll find out next Friday when the first round starts.

The game in gifs as they were tweeted out:

The shot from the boards: pic.twitter.com/pCIvggDteV

Borgen to Criscuolo to Olofsson! Text book. That's the 28th of the season for #GOALOfsson to put the Amerks up 2-0. pic.twitter.com/otOVDPII1C

Devils win it in overtime. pic.twitter.com/83AVZzg5WI

Here's the zone entry in overtime before they scored. Shouldn't have mattered but here it is. pic.twitter.com/UbFXxWLLDa