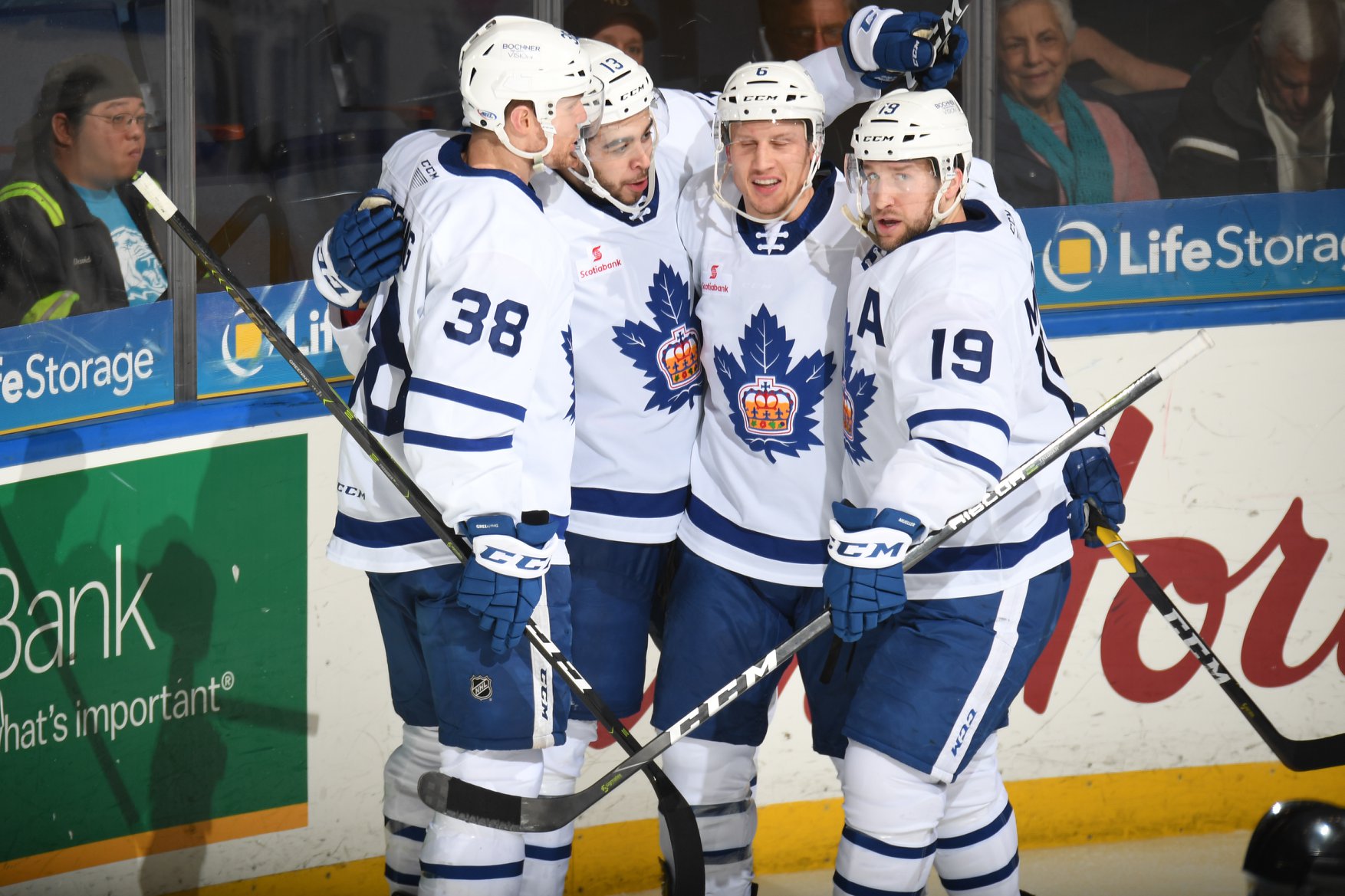 A positive takeaway from the 4-1 loss in game one to the Toronto Marlies is that the shutout was ruined by a Moe’s player of the game. Tage Thompson scored with 68 seconds left in the game which means you can take your ticket stub or coupon from a program card for 50% off at any participating Rochester location. (*not sponsored, just finding something to run with here)

The bad news is that they lost game one in the first round that is a best of five. It’s the Amerks third consecutive Friday night loss on home ice and the fifth loss out of the last six Friday games. Overall this season the team is now 4-8 for Friday games on home ice with a crowd over 6,000 fans. There was an impressive 7,502 in attendance to see the loss. That was the largest crowd for an Amerks home playoff game since May 8, 2004 when 8,486 watched the team play against Hamilton in the second round.

That’s not the start the team wanted in the playoffs after talking all season about being an elite playoff team.

The Amerks have had great bounce back games all season and they’ve even played better in front of smaller crowds. Game two is Easter Sunday. There’s a good chance it’ll be one of the smallest crowds of the season. They’ve also been a dominant road team. The Marlies have struggled at home, just like the Amerks. The odds are in favor of Rochester based on off ice stats. A best of five series isn’t decided by game one but as Zach Redmond said after the game, game two could be considered a must win. Three out of four home teams lost Friday night in the American League if it makes anyone feel any better. Probably not.

After the game the team talked about not being able to capitalize and talked about putting this one behind them. That’s all they can really do. They’ll watch some video Saturday morning going over the loss and get in a quick practice before game two this Sunday.

“I think we did a lot of good things especially early. Unfortunately there’s no moral victories in the playoffs,” Andrew MacWilliam said. “We have to give them credit, they had chances and they took advantage of them.”

Zach Redmond talked about the message to the team after the game, “This time of year there’s no need to hang your head, or wonder what if, or think anymore about tonight. I thought we were the better team for a lot of the game. We had a lot of chances that we missed and we really need to move on.”

The Amerks hit four posts in the first period, two empty nets, and another 15 shots against the Marlies in the first period but they couldn’t find a way to get the puck across the goal line and into the net. Rasmus Asplund had a wide open net but shot wide. He owned up to that and kept it simple that he has to score on those.

Victor Olofsson said, “If I execute a couple of those shots in the first it’s a totally different game.”

CJ Smith had a breakaway just over 90 seconds into the second period and his shot off the knob of Marlies goalie Kasimir Kaskisuo’s stick.

It’s a game of inches and at a time when the game could’ve been 5-0 in favor of Rochester it was still scoreless.

“I thought there were a lot of nerves going on there. We have to capitalize on those especially in the playoffs,” Chris Taylor said after the game. Asked to elaborate on how he sensed it was nerves he said, “When you miss empty nets, posts, you’re close but you’re not. We were trying too hard and it just didn’t happen.”

Chances, posts, and empty nets all sound great but they lose meaning based on the way the game progressed.

Nick Baptiste, the former Amerks forward, scored the first goal of the game at 2:53 of the second period off a rebound to change the direction of the game. Chris Mueller took the initial shot, MacWilliam wasn’t able to clear the rebound, and Baptiste quickly beat Scott Wedgewood.

Lawrence Pilut had a great scoring chance but the story remained the same, a post was hit.

Chris Mueller tipped a shot through the pads of Scott Wedgewood to give the Marlies a 2-0 with 5:29 left in the second period and that really took the energy out of the building. Rasmus Sandin took a shot from the point as a Danny O’Regan penalty had expired and it was tipped by Mueller.

As the chances dwindled for one team that started the game shooting pucks wide, hitting posts, or missing empty nets the other team was getting bodies in front of the net and scoring off rebounds or tips.

Chris Mueller struck again at 10:50 of the third period on the power play thanks to some puck luck. Jeremy Bracco took a shot from the point that went wide of Wedgewood but the puck hit Mueller, dropped to the ice, and Mueller was able to tap it into the net for a 3-0 lead.

Dalton Smith was serving a two minute interference call for taking down a Marlies player in front of the net. That’s a penalty every game in the regular season but questionable in the playoffs. Matt Tennyson had been hit into the boards earlier in the game after an icing and there was no call. That appeared to set the tone for how the game would be called but it wasn’t.

The building started to empty when Adam Brooks scored a short handed goal at 14:45 of the third period. Pierre Engvall worked the puck below the Amerks blue line and was able to keep it away from Taylor Leier and Victor Olofsson. A quick no look pass behind the Amerks net resulted in a wrap around goal by Brooks through the pads of Wedgewood.

Chris Taylor said, “Nothing worse than giving up a goal on your power play.”

Tage Thompson scored the only Amerks goal with 68 seconds left in the game with a quick shot from the boards on the right side. Taylor Leier was in front of the net screen Kaskisuo and a puck finally found it’s way into the net.

“Deep down they know we let one slip away,” Chris Taylor said after the game.

The game itself was a big colossal disappointment over the last 37 minutes. Yes, it’s only game one. Yes, they can come back. But for people who watch this team every week it was the third Friday loss in a row and fifth Friday loss out of the last six games. They’re disappointing in front of big crowds. They’re right to say you just have to move on but the story remains the same week after week.

“You have to just forget about these games and look for the next one. If you win you just have to keep looking for the next game,” Victor Olofsson said after the game. “We’re happy with the way we played and we just have to execute a little bit better.”

They’ll work on the execution at a late Saturday morning practice before game two this Sunday.

There’s 29 healthy players on the current Amerks roster which means some have to be scratched. One of those player scratched was Eric Cornel, the only Amerks player that played in all 76 regular season games.

I asked Cornel about that and he said, “It’s a little tough. I think I gave everything I had for the team all season and I’m going to continue to do that. Whatever role they have me in if it’s in or out of the lineup I’m going to do the best I can to help the team win and be really positive. We’re thinking long term with this so for me I’m excited to have a long playoff run and contribute in whatever way is possible.”

Tage Thompson continues to be a team leader with shots on net and scored again. One thing that really stood out in game one was the physical play. He was finishing more checks and his back checking was the best on the team. Individually it paid off for him late in the game with a goal. After he scored he knew the goal was meaningless and held off any kind of reaction.

Alex Nylander is still out with lower body injury (a cut) on his lower leg. No one knows how serious it is but he’s been out for three weeks now. He’s been seen around the rink and appears to be walking normal.

Andrew MacWilliam had the crowd on it’s feet early in the game with a big hit on Marlies forward Jeremy Bracco.

After the game MacWilliam said, “It’s playoffs so anytime you get the chance to lower the boom one somebody I’m going to take it.”

Standing ovation for Big Mac! Keep your head up. pic.twitter.com/K1LqK6J5yo

Here’s the game in gifs (as always) as they were Tweeted.

Best scoring chance of the game from the 12,26,65 line. pic.twitter.com/PnnB9VafBi

Elie and DSmith split the defense creating another chance. Great work by Veilleux getting them the puck. pic.twitter.com/O6Dm6l11JP

CJ is snake bitten on breakaways. A lot of blocker side shots on Kaskisuo. pic.twitter.com/pkNkum7GxG

Another view. Needed a save on that. pic.twitter.com/NdDn0aJlw4

The other view from up high. pic.twitter.com/3F9G4Ox6U5

Marlies 3rd goal. Down low, behind the defense again. pic.twitter.com/D8T8d9MgT4

Wrap around goal for Adam Brooks to take a 4-0 lead. pic.twitter.com/al2L317nCO

Thompson scored the only goal. Marlies win 4-1 in game 1. pic.twitter.com/isDtRFT8tl

Here’s three other recaps to get any idea of what others have said about the game: