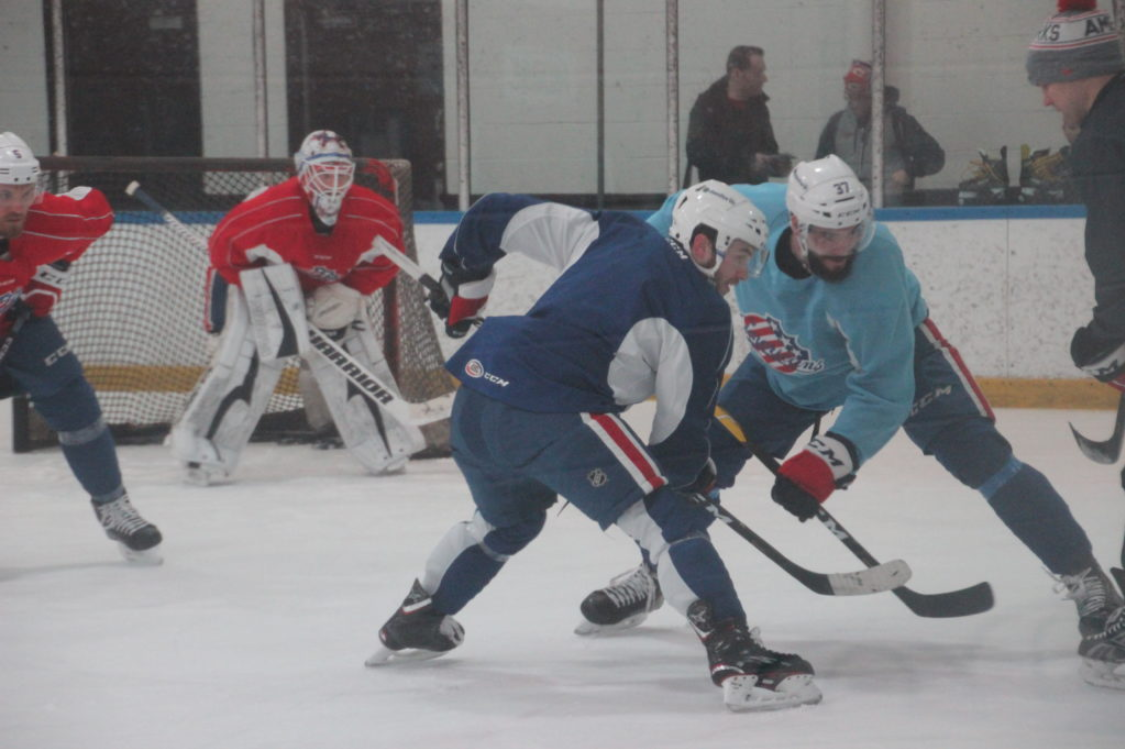 It’s game two in the best of five series this afternoon and the Rochester Americans are going into a must win game on home ice. At the same time the defending Calder Cup champion Toronto Marlies are coming off of a confident 4-1 win in the first game Friday night. The Marlies made it through the first 23 minutes without giving up a goal while also watching the Amerks miss empty nets when they had chances to score.

Rochester dominated Toronto in hits, shots, and overall scoring chances. The one thing they couldn’t do was score. Toronto scored at 2:53 of the second period and the game changed. If there were moral victories in the playoffs that would’ve been a great game for Rochester. That’s not the case and now they’re facing a must win game on home ice.

The team practiced late Saturday morning and it was an upbeat practice as they usually are. The power play work appeared more intense than usual which was also the weakest point in the game Friday night. Rochester had three power play chances and they weren’t able to get any sort of play going. One chance was when the game was scoreless, another when they were down 1-0, and the third when they were down 2-0. On the third power play they gave up a short handed goal to Toronto and that was the game.

Tage Thompson played one of the more physical games since he’s been in Rochester. Fore check, back check, open ice bumps, and he finished almost every hit. If there’s a player that’s stepping up his game it’s him. I asked him about the physical game and he said, “It’s a playoff game, the intensity level goes up for sure.”

Thompson scored the only Rochester goal with 68 seconds left in regulation. He was able to protect the puck along the boards, turn, shoot, and the puck went in with Taylor Leier doing a great job screening goalie Kasimir Kaskisuo. A text book way to score a goal in any hockey game.

Throughout the game the chances Rochester had were open net opportunities, posts, shots wide, or an extra pass. They weren’t getting the rebounds for the much needed second and third chances or even getting anyone in front of the net for tips or redirects. Toronto was. Nick Baptiste scored after a rebound landed at his feet and Andrew MacWilliam wasn’t able to clear it. Chris Mueller scored by tipping in a shot while he was planted in front of Wedgewood.

“When you go over video and you see that we out chanced them 23 to 10 even strength it means we had a lot of good chances and a lot of good looks. If we execute after the first period it’s a different type of game but we didn’t,” Chris Taylor said after practice. “That’s part of the game. We have to execute and we have to score those goals.”

There were opportunities to win early in the game but they dwindled as the game went on.

“Usually we put those in any time we have all those opportunities. We had breakaways from CJ Smith and Olofsson. Two empty nets and four posts. I think that the guys wanted to put in so badly that it just didn’t happen. It’s going to happen,” Taylor said talking about the chances and nerves that may have gotten in the way. “We’re going to have set backs like this. Obviously we didn’t want that to be in the first game but it is what it is. We have to be ready Sunday against a really good team.”

A key to the game for Rochester will be special teams. They were the better team five on five but Toronto scoring a power play goal and short handed goal was the key to their win.

Taylor talked about dominating Toronto at even strength saying, “We haven’t done that all year to any team. We had 85 shot attempts and we’ve only had that many two other times this year. We just didn’t score goals and that’s part of it. We all need to step up our game, do things a little better, and stick to our game plan.”

Dalton Smith was a healthy scratch in all three playoff games last season against Syracuse. He played in game one and is expected in the lineup again today. He talked after practice about the mentality of playing over others saying, “You have to go out there and play the game not just for yourself but for the guy sitting out. We have really good players sitting out that should be playing so you just have to play with the kind of mentality that you’re playing for everyone and you have to give your best effort.”

“We believe in ourselves and we know we’ll bounce back,” Dalton Smith said about the confidence in the locker room leading into Sunday.

Overall the Amerks finished the season with a 6-1 record playing on Sundays this season. Three of those games on home ice with a 2-1 record. As of Saturday night the Easter Sunday ticket sales were around 3,500. The team was 8-3-0-1 on home ice with under 4,000 in attendance. The team has had bounce back games throughout the season which lead them to success. They’ll rely on another bounce back to get the first of 19 hopeful wins between now and the middle of June.

Ukko-Pekka Luukkonen was on the ice for his first full team practice Saturday morning but did not take part in any drills or face any line rushes. Up until Saturday he would wait until after the stretch to go out on the ice and get in some extra work.

Rochester will want to win game two just like four other teams have done in the American League.

Hershey won game two by a 2-0 score after losing in game one in the second overtime to Bridgeport.

Chicago won game two by a 3-2 score after losing 5-1 in game one to Grand Rapids.

Colorado won game two by a 4-1 score after losing 3-2 in game one to Bakersfield.

Syracuse is the only team that has lost two games so far in the first round. Cleveland won 5-3 in game one and 5-1 in game two.

Another must read preview: