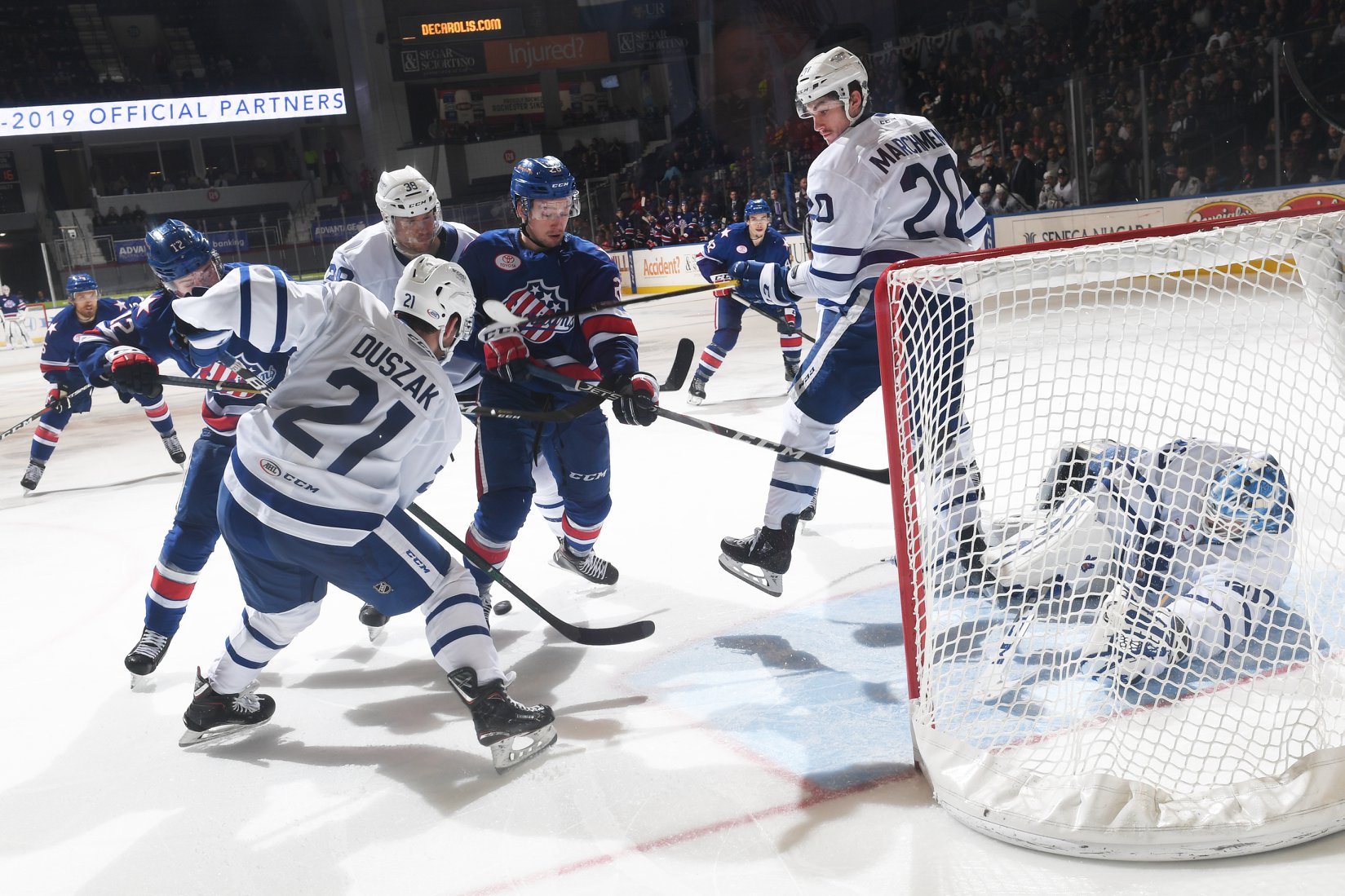 Everything was setup for the Rochester Americans to win game two but they didn’t. The team has been great all season at bouncing back from a loss and generating wins. They’ve also been great at winning games in front of smaller home crowds which there was on Easter Sunday. They’ve also found ways to score big goals when they needed to. None of that happened.

Toronto now has a 2-0 lead in the best of five first round series and they’re one win away from making this season a total bust for the Rochester Americans.

“We have to execute. I don’t know what to say,” Chris Taylor said after the game. “We’ve done it all year with executing and scoring those big goals and right now we’re having a really hard time with it.”

They’ve only scored three goals on 72 shots. The Marlies have scored seven goals on 46 shots.

Chris Taylor put it out there in post game comments, “If we want to be a team that goes anywhere and even win one game we have to f###in put pucks in the net.”

It was dÃ©jÃ  vu in the first period when Rochester controlled the pace of play with chances, shots, posts, and the inability to score. Rochester had a 18-7 advantage in shots through the first 20 minutes. They weren’t as dominating as the first game but still controlled everything about the period.

The second period is where things turned around this time for the Amerks.

CJ Smith carried the puck down the left side and buried the puck underneath the cross bar at 4:05 of the second period to give Rochester a 1-0 lead.

Still amazes me that some don't seem to think of CJ as the same type of threat as others. What a shot! pic.twitter.com/zJRISXdv64

Rochester continued to lead the game through the second period and with 1:24 left in the period Kevin Porter gave the Amerks what should have been a much needed 2-0 lead. There was some great work by Wayne Simpson to keep the puck in the zone. Kurt Gosselin beat a Marlies player to the puck on the boards which lead to a quick pass from Simpson to Porter for the goal.

Captain Porter puts the Amerks up 2-0!! Play started with Gosselin keeping the puck in along the boards. Porter slid it under Kaskisuo. pic.twitter.com/Ai5YFOk98N

And then the third period happened.

Two shots on net in the first two minutes of the period resulted in two Toronto goals. First it was Chris Mueller with his second power play goal of the series followed by Jeremy Bracco grabbing a loose puck with a lot of time down low scoring around Wedgewood.

Marlies get on the board with a PP goal. Mueller again. pic.twitter.com/M4vIAPV4Fu

Two shots. Two goals. Less than a minute into the 3rd. Marlies tie the game 2-2. pic.twitter.com/yigjOBAL2B

The remaining 18 minutes of the third period generated an entirely new hockey game. Toronto was feeling better about themselves and back to playing to win. Rochester was back to relying on chances and still unable to score. The top two lines of CJ Smith, Porter, Simpson, Olofsson, Asplund, and O’Regan dominated the ice time and were likely gassed by the end of regulation. The usual fourth line spark lead by Dalton Smith was nowhere to be found.

After the game Chris Taylor said, “We can’t make mistakes, we have to play perfect hockey. Sixty minutes. We have to be wanting to score goals so bad that you’re putting your body going into the net after the puck goes into the net.”

The team couldn’t find ways to score and the early third period penalty was a turning point.

“A lapse for the first two minutes there. They tie it up, force overtime, and score in overtime. Just shows this time of year you have to play a full 60,” CJ Smith said after the game. “Can’t give up even for a minute or two and we did for two minutes and they were able to tie it up.”

Kevin Porter said, “We made mistakes, they capitalized.”

Porter questioned whether it was a penalty or not. Chris Taylor had no comment on it. You make the call below.

Whack whack whack. Have to play smarter than that when the other team has a great power play. pic.twitter.com/HmdRhvYn4d

Toronto held on and forced the game to overtime.

It only took one shot for the Toronto Marlies just 2:20 into overtime to win the game and take control of this series and their season. Redmond slid to the ice to try and block a shot vs standing Bracco up, the rest is history as you can see below. In the NHL this would have been challenged for goalie interference but those rules don’t apply in the American League. Toronto wins.

“We didn’t do our work up the ice,” Taylor said about the overtime goal against on what lead to the rush. “Redmond thought it was a two on one so he had to slide. Bracco made a good play. We have to be harder on that guy, we have to be harder on him. Way too easy, look at the points he’s getting.”

Jeremy Bracco scores in overtime to win 3-2. Marlies have a 2-0 series lead. pic.twitter.com/YbA9umLbSX

That’s back to back playoff losses. The team is 0-5 in the past 361 days in playoff games. There’s no benefits to talking about chances or opportunities.

“I’m upset. I’m mad. I know the guys are upset and mad,” Taylor said. “We need the results and it’s frustrating but again we have another game.”

Toronto has been as bad as the Amerks on home ice. The Amerks have been a great road team just like the Marlies have been. Game three is Wednesday night in Toronto. Rochester needs to win three straight to prevent this season from being a total bust.

They’ll get in another practice before heading to Toronto with to save the season.