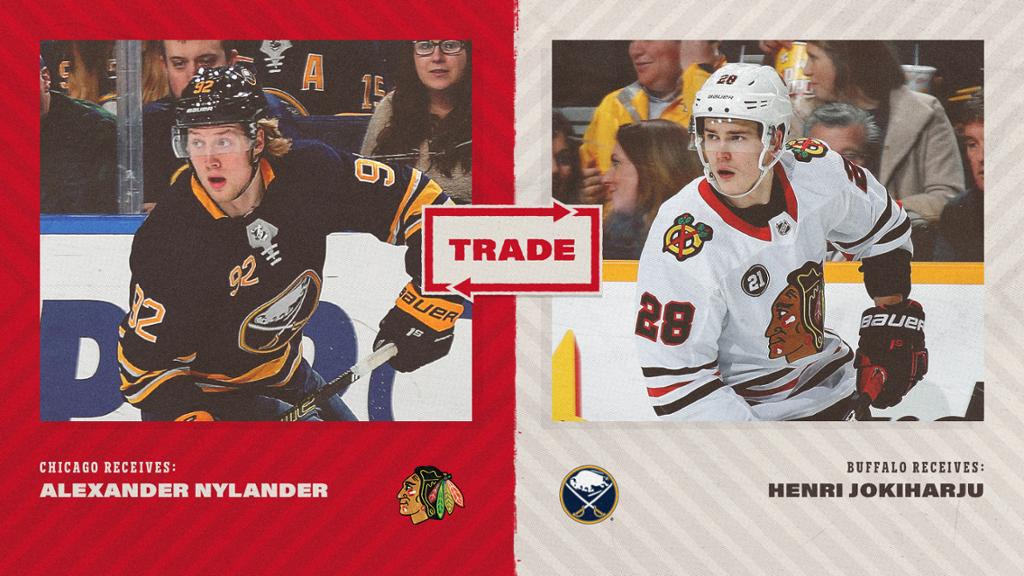 A surprise move was made Tuesday afternoon when the Buffalo Sabres announced that they traded Alex Nylander to the Chicago Blackhawks in exchange for defenseman Henri Jokiharju.

The following statement was released in a press release from the Sabres:

“Henri is a young, mobile defenseman who has shown he can compete at the NHL level,” Sabres General Manager Jason Botterill said. “His international success last season only furthered his development and we are excited to add him to our current group of defensemen.”

The Sabres have acquired a 20 year old right handed defenseman going into his second season in exchange for a 21 year old forward that’s going into his fourth season that has done very little in terms of production and development.

Alex Nylander will be remembered for his time in Rochester for getting benched in game two of the 2018 Calder Cup playoffs followed by a mysterious cut that kept him out of the 2019 Calder Cup playoffs completely. Nylander did have a brief 21 game stretch during the 2018/2019 season where he looked like a new player but went downhill from that point forward in terms of production. There’ll always be a debate that Nylander never should have started in the American League at 18 years old which is true but the development never improved.

Henri Jokiharju has won a gold medal with Finland at the 2016 World U18 Championship and also the 2018 World Junior Championship. Initial reports are that Jokiharji is an NHL ready defenseman that can step right in.

From Mark Lazerus in a recent article on The Athletic:

Let me start this by saying I donâ€™t believe thereâ€™s any malicious intent behind Henri Jokiharjuâ€™s sudden and curious plummet down the organizational depth chart. I donâ€™t believe the Blackhawks are actively shopping him, nor do I believe they really want to trade him. I do believe theyâ€™re not ruling it out, however. If Stan Bowman has shown us anything over the years, itâ€™s that he views all prospects as assets, and that heâ€™s perfectly willing to throw in a sweetener to get an unwanted contract off the books.

Me? Iâ€™d sure as hell rule it out. I saw enough out of Jokiharju last season to know heâ€™s a legitimate top-four defenseman in the NHL right now, and a future top-pairing guy â€” which the Blackhawks desperately need in the present and the future. He has the skills, the smarts, the savvy and the self-possession to be a very good player for a very long time. And while the Blackhawks are loaded with promising defensive prospects, only Jokiharju has proven he can actually do it at the NHL level.

Read more at: #HeyLaz mailbag: What are the Blackhawks doing with Henri Jokiharju?

Some additional stats on Jokiharju:

Collect all the good puck moving defensemen that you can pic.twitter.com/1FGffBYWQz

Henri Jokiharju may never set foot in Rochester which is alright given the depth available for the upcoming season. This is a win for the Buffalo Sabres.

â€œHenri is a young, mobile defenseman who has shown he can compete at the NHL level,â€ Sabres General ManagerÂ Jason BotterillÂ said. â€œHis international success last season only furthered his development and we are excited to add him to our current group of defensemen.â€

Drafted by Chicago in the first round (29th overall) of the 2017 NHL Draft, Jokiharju was named to the Western Conference Second All-Star Team in 2018 after recording 71 points (12+59) in 63 games for the Portland Winterhawks (WHL). He posted 119 points (21+98) in 134 career WHL games before making his professional debut last season.

1 thought on “Alex Nylander Traded to Chicago for Henri Jokiharju”