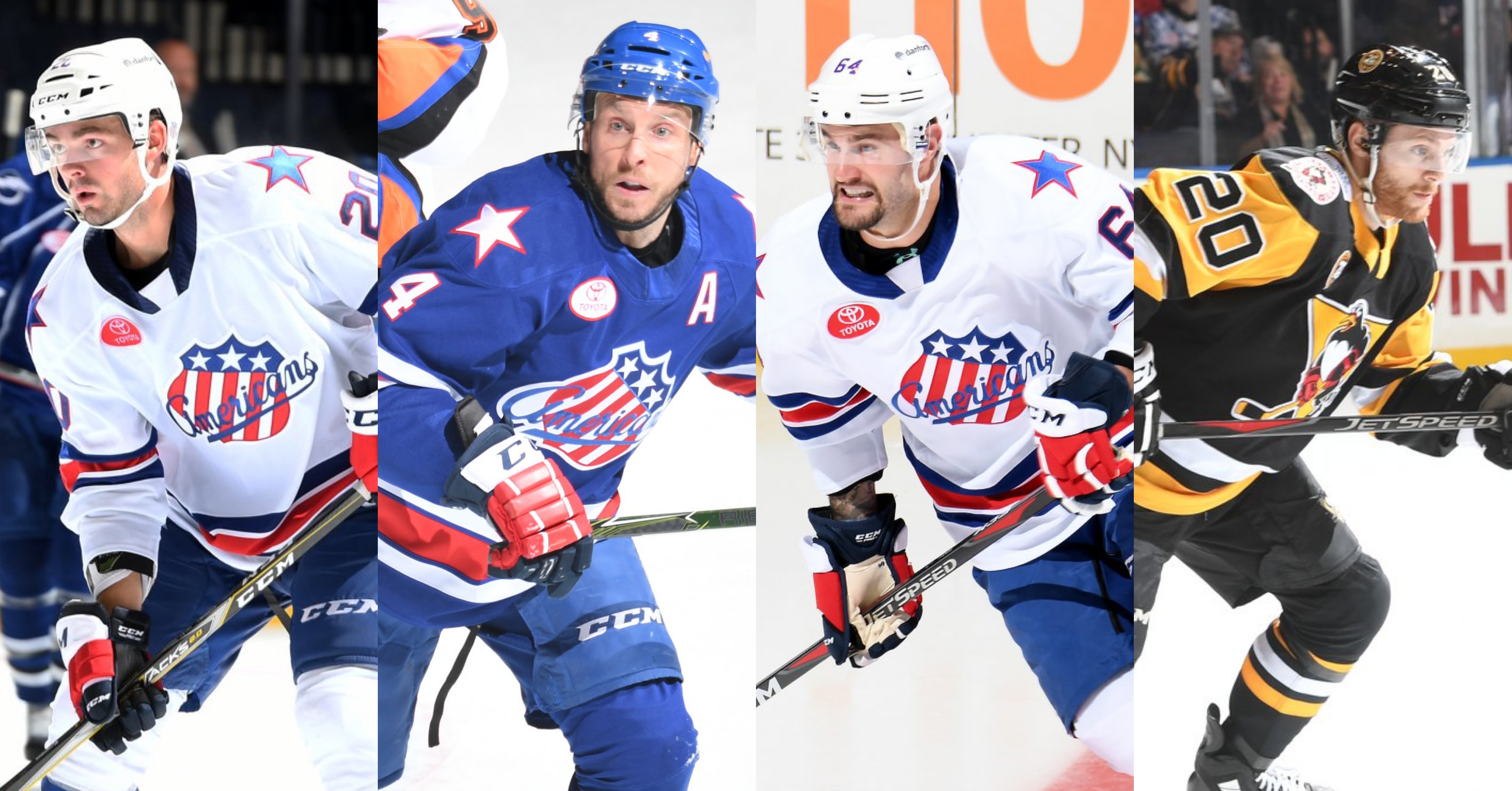 The Rochester Americans finished the first week of free agency by signing three players to return for the 2019-2020 season and one new player. Forwards Eric Cornel, Tyler Randell, and Nathan Paetsch all re-signed for an additional season in Rochester. The new player to the organization will be Jarrett Burton who has spent the past four seasons with the Wilkes-Barre/Scranton Penguins.

Jarrett Burton joins Jean-Sebastian Dea as the second player to defect from the Penguins to the Amerks in the first week of free agency. From watching some game video from last season Burton often plays on the right wing in a third line role. Last season Burton had 21 points (6G+15A) in 66 games. Burton is a player that Jason Botterill, Randy Sexton, and Chris Taylor are familiar with from their time with the Penguins. Burton was named the Penguins “defensive player of the year” for his penalty kill and face-off work.

JARRETT BURTON’S JOURNEY TO DEFENSIVE PLAYER OF THE YEAR

Some additional research shows that Jarrett Burton is also willing to drop the gloves when necessary.

Eric Cornel was the only Amerks player last season to play in all 76 regular season games. He didn’t receive a qualifying offer from the Buffalo Sabres to return on an NHL contract but they like the depth he provides as a non veteran forward and plays a utility role where he’s able to fill in at any position on any line.

Tyler Randell will return for his second season with the Amerks after playing in 36 games last season accumulating seven points (3G+4A) and 45 penalty minutes. Randell is an exempt veteran and was a surprising return considering the fact that they also brought back Dalton Smith. Credit to management for continuing to have some muscle on the team.

Nathan Paetsch only played in 11 games last season but the leadership and mentoring that he brings to the team is priceless. When he did play in a game it was like he’d played all season and even filled in at the forward position as needed. With another young core of defenseman the role of Paetsch will continue to be vital.

Iâ€™m extremely grateful to be back with the Amerks for my 17th pro season. It will be my 10th full season with the @amerkshockey and @buffalosabres organization. They truly have made me feel like family.â€¦ https://t.co/UrlDCNXls1

Cornel, 23, returns for his fourth full season in Rochester after scoring nine goals for the second straight year and establishing career-highs in both assists (13) and points (22) while being the lone Amerks skater to appear in all 76 regular-season games last season. In 204 career games with Rochester, Cornel has totaled 54 points (23+31) while also skating in three playoff contests.

Prior to turning pro,Â the Kemptville, Ontario, native played four seasons with the Peterborough Petes (OHL), where he produced 213 points (70+143) in 265 career games. In his final season with the Petes, the 6-foot-2, 200-pound forward led the team with 56 assists and finished second on the team with 27 while serving as team captain.

Cornel was originally a second-round selection (44thÂ overall) of the Buffalo Sabres in the 2014 NHL Draft.

Randell, 28, returns for his second season in Rochester after recording seven points (3+4) in 36 games with the Amerks last season. In his AHL career, the 6-foot-1, 185-pound forward has notched 58 points (24+34) and 534 penalty minutes in 324 games with Rochester, Belleville and Providence. Randell has also appeared in 25 Calder Cup Playoff games, recording one goal.

The Scarborough, Ontario, native made his NHL debut with the Boston Bruins, who selected him in the sixth round (176thÂ overall) in the 2009 NHL Draft, during the 2015-16 campaign, scoring six goals in 27 games.

Burton joins the Amerks after splitting the 2018-19 season between the Wilkes-Barre/Scranton Penguins (AHL) and the Wheeling Nailers (ECHL). The 28-year-old forward, who was named Wilkes-Barre/Scrantonâ€™s Defensive Player of the Year, posted a career-high 21 points (6+15) in 66 games with the Penguins. He also added a pair of goals and one assist in five games with the Nailers.

Prior to turning pro,Â BurtonÂ played four seasons at Clarkson University (NCAA), where he produced 54 points (28+26) in 141 career games. During his final season with the Golden Knights, he tallied 20 points (11+9) in a career-high 42 games while serving as team captain during the 2013-14 campaign.

Paetsch returns for his seventh season with the Amerks after recording three points on one goal and two assists in 11 games while serving as assistant captain in 2018-19. For the second consecutive year, Paetsch was named the Amerks AHL Man of the Year for his commitment to the Rochester community throughout the season.

Prior to rejoining the Amerks for the 2017-18 season, Paetsch spent five seasons with the Grand Rapids Griffins, where he led the team to five straight playoff appearances and two Calder Cup championships while also serving as team captain during the 2016-17 campaign.

A native of LeRoy, Sask., the 36-year-old Paetsch has appeared in 248 career games over parts of six seasons in the red, white and blue, recording 98 points on 22 goals and 76 assists. He currently ranks 26thin scoring among all-time defensemen in franchise history. His best season as an Amerk came during the 2005-06 campaign when he posted career-highs in goals (11), assists (39) and points (50) to lead all Rochester defensemen and finish ninth among all AHL blueliners in scoring.

In his AHL career, the 6-foot-1, 195-pound veteran blueliner has amassed 257 points (51+206) over 641 career AHL games with Rochester, Grand Rapids and Syracuse, while also adding 34 points (5+29) in 104 playoff contests. During the 2016-17 season with Grand Rapids, he became just the 18thÂ player in AHL history to play in 100 or more Calder Cup Playoff games. Paetsch has also totaled 42 points (7+35) over 167 career NHL games with the Buffalo Sabres and Columbus Blue Jackets.

Originally a second-round pick (58thÂ overall) of the Washington Capitals in 2001, Paetsch was later acquired by the Buffalo Sabres in the seventh round (202ndÂ overall) of the 2003 NHL Entry Draft.

Amerks 2019-20 Season Ticket Memberships, which start as low as just $14 per game, are on-sale now. Full-season ticket member benefits include, but are not limited to, Riverside Club VIP Room access with Amerks Alumni, family meet and greet and annual Skate with the Players event, an exclusive preseason Ice Breaker Party and much more. For more information, visitÂ www.amerks.comÂ or call 1-855-GO-AMERKS.