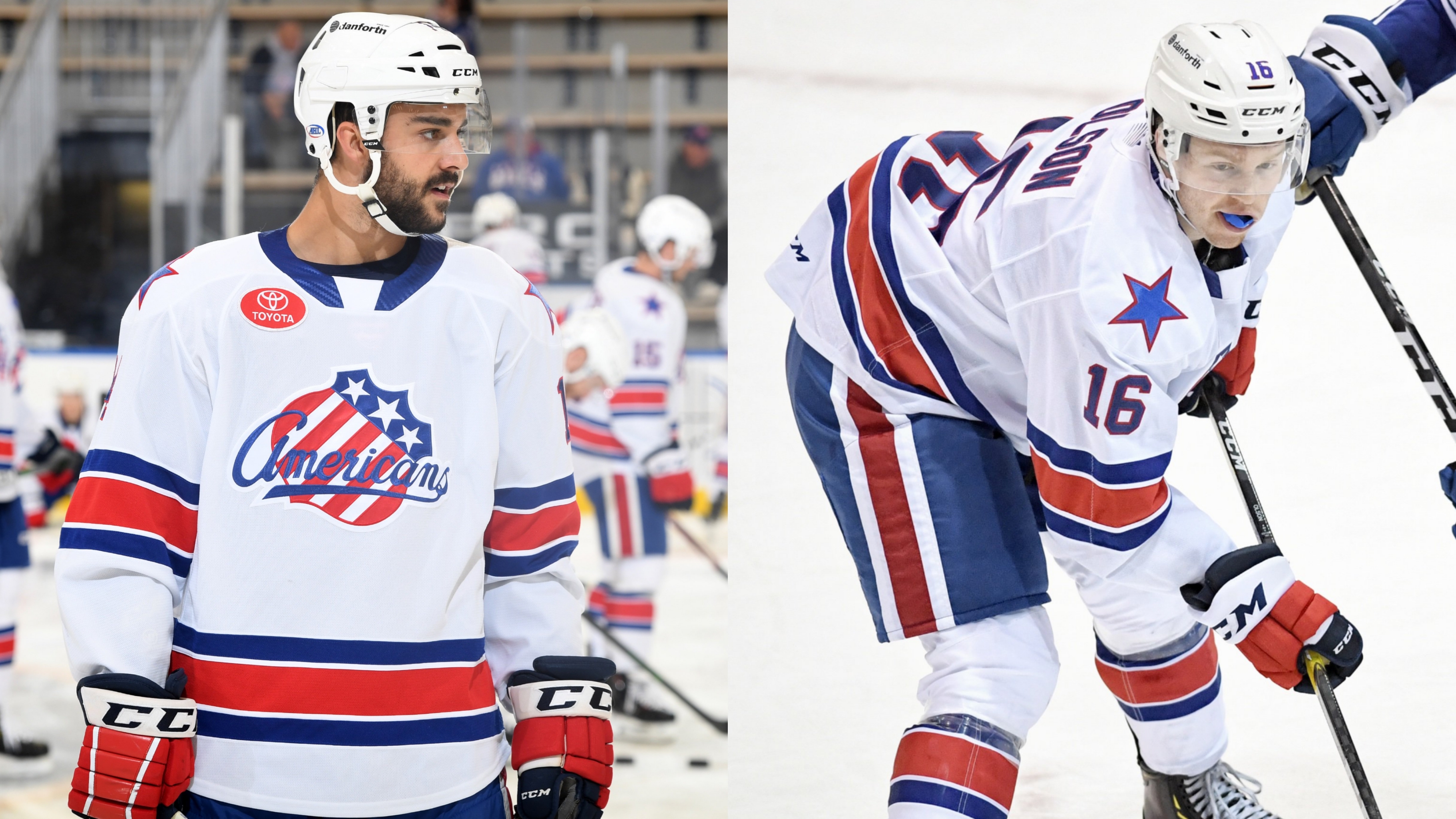 The Rochester Americans will have one more practice before the regular season begins Friday night and everyone is ready. Here’s a quick run down of some updates from Wednesday from practice and moves that were made.

Two moves were made on Wednesday to trim the roster down by assigning Pascal Aquin to Cincinnati and releasing Kyle Olson from his tryout with the team. The two players were not on the ice with the Amerks earlier in the day.

Pascal Aquin signed a one year AHL contract with the Amerks for the second consecutive season. Last year Aquin had 59 points (27+32) in 68 games with the Cyclones. He only appeared in one game with the Amerks which was the final game of the season when everyone else had the night off before the playoffs.

Kyle Olson has been with the organization since the Prospects Challenge as a tryout. He’ll likely return to the Tri-City Americans of the WHL for his last season as an overager. Last season Olson had 70 points (21+49) in 62 games. He also tallied a whopping 112 penalty minutes.

Brett Murray is the only player still practicing with the team that is without a contract. The fact that he’s with the team less than 48 hours before the regular season begins there’s a good chance he’s signed to a PTO (Professional Tryout).

Jean-Sebastian Dea, Curtis Lazar, and Lawrence Pilut were not on the ice for practice with the team. This is due to the salary cap moves that Buffalo made Tuesday to be cap compliant and save some money. The moves make sense for NHL salary cap purposes but it doesn’t make sense to have two players missing practice a couple of days before the season starts. They’re pro’s and will have to figure it out. We’ll see if Buffalo is able to make the paper move again Thursday morning so they can practice with Rochester.

Lawrence Pilut did return to skating with the team but as of Tuesday wasn’t cleared for game action yet.

A number of people have asked about line combinations at practices and after two team practices I can say that I haven’t been able to piece together any pairings.

AHL teams typically don’t like line combinations being shared on a regular basis like NHL teams because the media coverage isn’t the same for every team and sometimes it’s looked at as giving another team an advantage. Might seem silly but when only a few teams have reporters at practices regularly I can see how other teams might try and use every little advantage they can.

Back to Amerks practice, the team hasn’t practiced your standard line rushes. There have been a lot of mixed lines and pairings and odd man rushes in drills. One example is that Tyler Randell was skating at one time with Rasmus Asplund and Kevin Porter. That’s an unlikely trio in a game.

Defensive pairings have been all over the place as well.

The players may already know who they’ll be skating with or maybe they don’t. It’s an interesting mystery as they’ve taken a different approach on the ice at practice this week.

Blue Cross Arena has new security policies in effect for the season including walk through metal detectors. These will replace the hand wands from previous seasons. You don’t have to take off your shoes or belt. There’ll be small trays on a table to put your phone and wallet into. This isn’t all that much different from a majority of arena’s around the country, they’re just late to arrive in Rochester.

New walk through metal detectors inside Blue Cross Arena. No different than a lot of arenas around the country. pic.twitter.com/BXUShUrUqb

With the temperature change the arena had a layer of fog this morning and of course someone took the chance to write on the glass.

When the glass is fogged up you write on it. pic.twitter.com/eWpyNsTN8M

If you’ve read this far I’ll say thank you for reading! Take a moment to fill out a quick reader survey looking for feedback — http://letsgoamerks.fan-survey-2019.sgizmo.com/s3/

And one last update, the league has announce the officials for the 2019-2020 season. Many American League fans will be excited to hear that Chris Ciamaga is no longer an AHL ref. Former Amerks forward Justin Kea looks to be on the list of new officials this season.

Chris Ciamaga is no longer an AHL ref. Here's a list of who'll wear the stripes this season.https://t.co/QcZDGBC11w