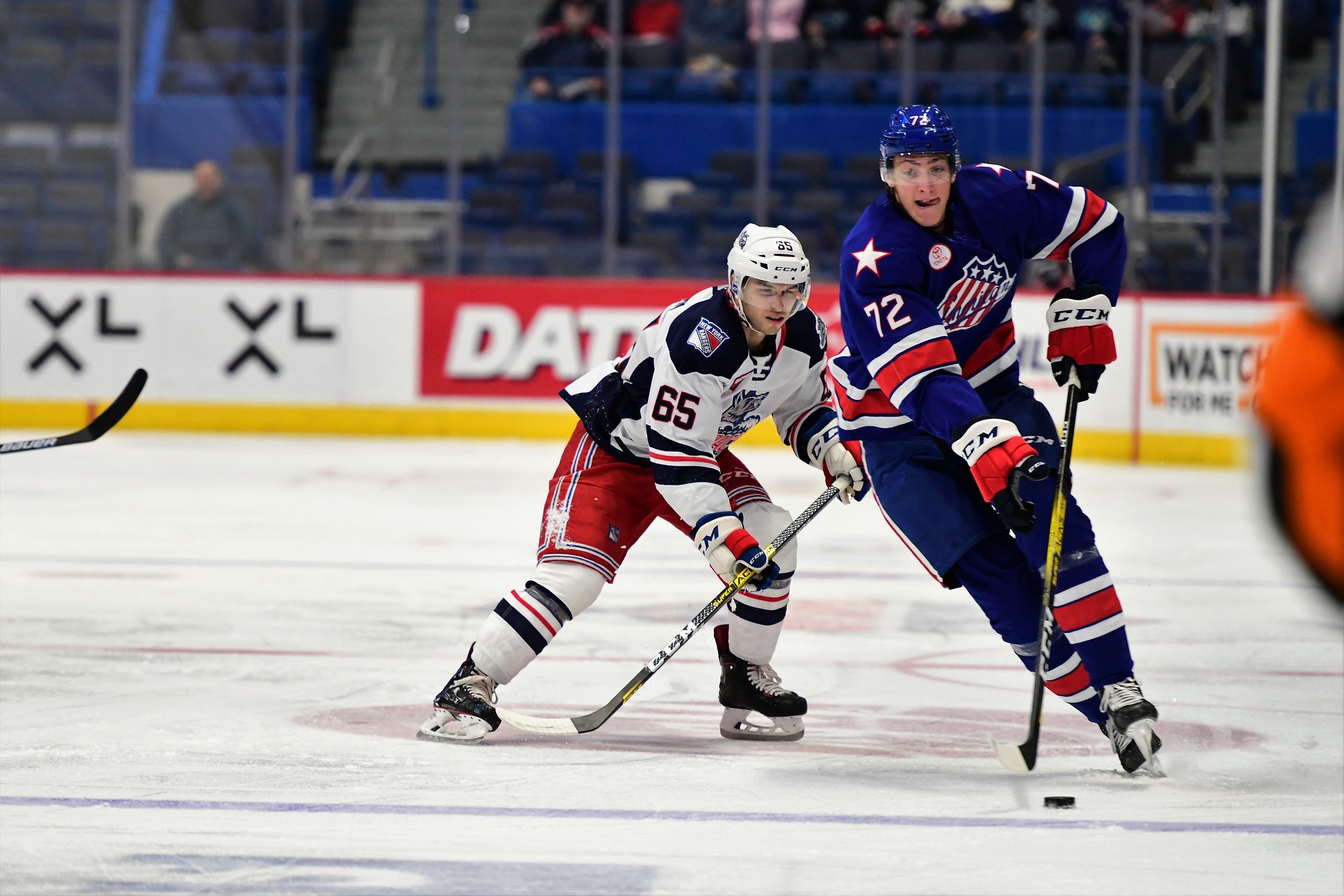 The first 40 minutes didn’t go as planned for the Rochester Americans down by two goals but the team wasn’t ready for a loss and a longer than necessary bus ride back home.Â Tage Thompson helped carry the work load in the third period to start a comeback and eventually scored the game winner.

Remi Elie scored early in the the third period with an assist to Tage Thompson and Zach Redmond tied the game with 12.6 seconds left in regulation to force overtime. Tage Thompson was the only player to score in the shootout to complete the come from behind win for Rochester.

Rochester’s first three in three finished with two wins and a loss to end the second weekend of the season with a 3-1 record.

A fast paced scoreless first period that was over in under 30 minutes. Each team had a power play chance as the pace of play went back and forth end to end. The game started with a lot of energy for a Sunday afternoon.

That was a fast 1st period! Both teams are ready to get this Sunday game over with. No score. Amerks had a 12-10 advantage in shots. pic.twitter.com/BfJJLdT0Bm

Concern from the 1st period is no call on this cross check that CJ Smith took next to the net. He went down and was slow back to the bench. pic.twitter.com/1iNFK6Nbet

CJ Smith returned to start the second period and didn’t miss any additional time after the moment at the end of the first period.

The period started with more back and forth action with the best highlight to start the period coming from this hit by Rasmus Asplund.

Andrew Hammond was the star player for Rochester coming up with four big saves on a penalty kill with Sean Malone in the box for tripping. The Wolf Pack had the puck moving around the ice and Hammond was in position for every shot they took at him.

Hartford scored the first goal of the game at 9:47 of the second when Filip Chytil found himself wide open at the side of the net. Danny O’Regan tallied his fifth assist of the season on the play. Andrew MacWilliam and Sean Malone wiped each other out at the red line which opened up the odd man rush into the Rochester end.

Filip Chytil scores first for Hartford, assist to Danny O'Regan (his 5th of the season). pic.twitter.com/ylYalonSQ9

Zach Redmond was caught up at the blue line and the Wolf Pack capitalized with another rush down the ice. Boo Nieves was able to score on his own rebound late in the second period to take a healthy 2-0 lead on a Sunday afternoon.

Boo Nieves scores on his own rebound and gives Hartford a 2-0 lead. Redmond was caught up at the blue line, Nieves slipped past Bryson. pic.twitter.com/Y8YUr5rsD9

The Rochester offense has struggled through 40 minutes to create any momentum, chances, or finding ways to gain an odd man rush against the Wolf Pack. One player out of position on a Sunday afternoon is all it takes for a game to break open on a Sunday and that’s what happened in the second period.

Amerks are in a 2-0 hole after 40 minutes. A couple of quick rushes and they're in the lead. Amerks aren't getting any rushes or quality scoring chances. Hartford had a 14-8 advantage in shots in the 2nd period. pic.twitter.com/FQ4rmNRuuu

Remi Elie from Tage Thompson and the Amerks are only down by one w/ just over 15 mins remaining. pic.twitter.com/ONon4RFMcJ

Rochester continued to play a tight game through the rest of the third period and called a time out with just under two minutes to play. In the last two minutes the Amerks fired seven shots on net before Zach Redmond scored with 12.6 seconds left on the clock. The time out appeared to make a difference.

Third period shot locations. Amerks had a 14-9 advantage. 7 of those shots were in the final two minutes. pic.twitter.com/TZ3UmNS94m

Overtime was even on both ends with the Amerks having a 3-2 advantage in shots but neither team was able to setup a play or create a great odd man rush.

Amerks had a 3-2 shot advantage in overtime. pic.twitter.com/SvQ8Up14JU

Tage Thompson was the only player to score in the shootout and sealed the comeback win. JS Dea was the only other Amerk to attempt a shot.

Hartford had three chances in the shootout but Hammond made all three saves. Hartford shooters were Filip Chytil, Vinni Lettieri, and Phil Di Giuseppe.

#Amerks 3-2 comeback win!! Tage Thompson scores the only goal in the shootout. pic.twitter.com/O738gretqD

Final look at shot locations. Amerks finished with a 38-35 advantage in the game. pic.twitter.com/7dGldziUML

A win is a win no matter how you achieve it on a Sunday afternoon playing your third game in less than 48 hours. The team had a week off between games and finished the road trip with two wins.

Tage Thompson lead the way yet again which has been standard for the Amerks in just four games this season.

After four games the Amerks are 3-1 which is a great start to the season.

Curtis Lazar was called up by the Buffalo Sabres which is why he didn’t play today for Rochester.

Amerks next game is Friday October 18 at home vs Cleveland.