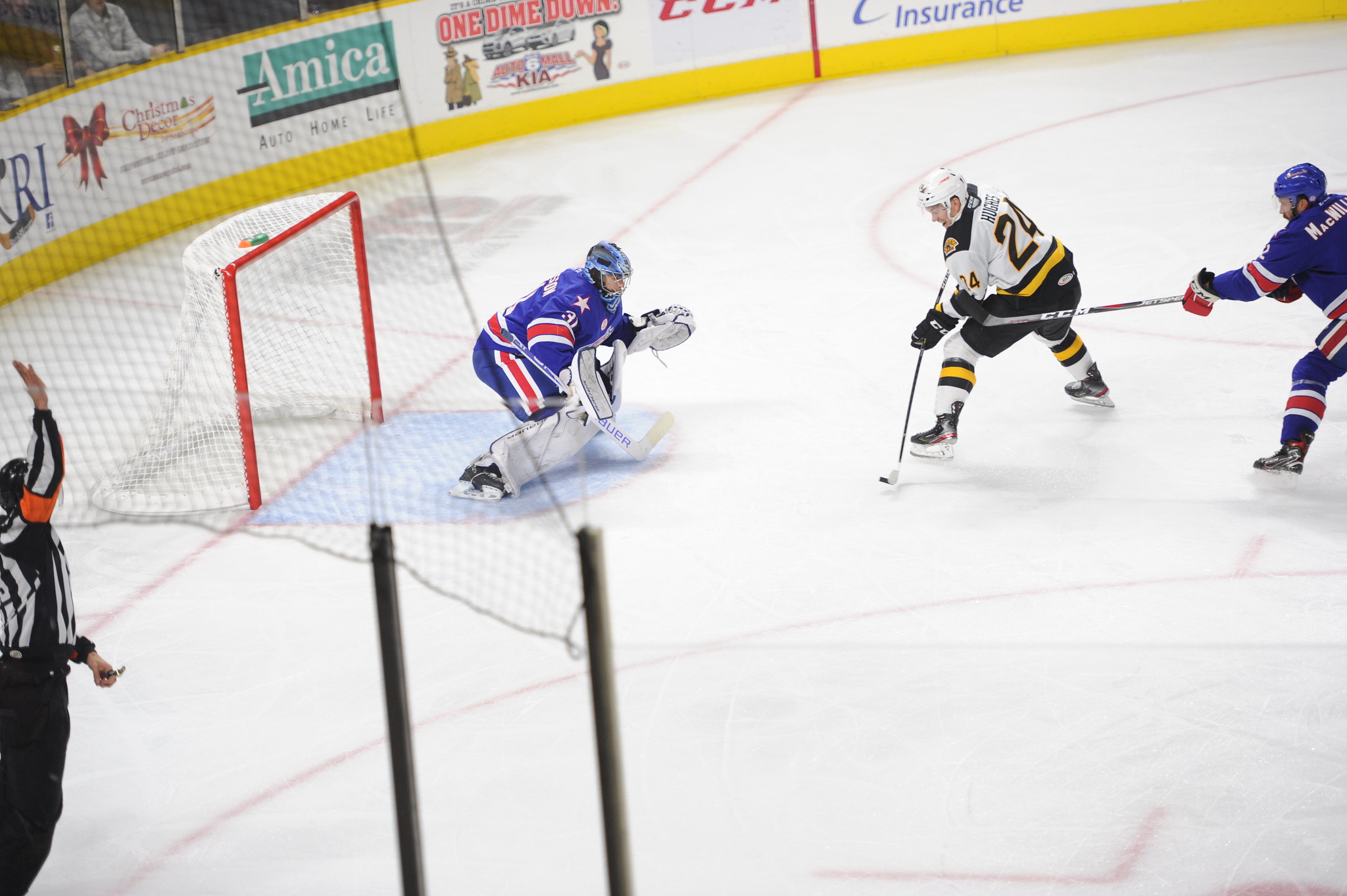 The Amerks lost their first game of the season (it’s only the third game) after a late goal by Providence in the third period with only 63 seconds left on the clock. The Amerks started the game strong but went downhill as it went. Could’ve been a case of Providence having Friday night off but early in the season the legs should have enough to play back to back games.

Rochester goals were scored by JS Dea and CJ Smith.

Jonas Johansson had his first start of the year in the loss and finished with 27 saves.

After a rather boring first period on Friday night the team was flying to start this game. The lines were changed up a little as well with Andrew Oglevie and JS Dea swapping lines.

Sustained pressure in the offensive zone, another strong defensive start, some luck, and a power play goal.

Paul Carey for Providence missed a wide open net early in the first after a bad bounce off the boards which could’ve changed the course of the period.

An odd bounce and Paul Carey for Providence will regret missing this one. pic.twitter.com/vWz1t8XkTi

The officials awarded a penalty shot for the slash by Andrew MacWilliam on the play below. A high shot and a save from the far cross bar stopped the puck.

A power play towards the end of the first period resulted in the first goal of the season for JS Dea and second assist of the season for Jacob Bryson. As Dea was heading up ice the pass from Bryson was tape to tape for Dea to split the defense and score. Scott Wilson earned a secondary assist on the play.

JS Dea splits the D and scores a PP goal!! #Amerks up 1-0. pic.twitter.com/PyyCY1gEGy

End of 1 and the #Amerks are up 1-0. They're dominating the Bruins. Wasn't a boring period like the 1st was yesterday. Amerks also have a 14-6 advantage in shots. But the shot chart is a bit messed up. pic.twitter.com/B98SKPhkw0

Two goals within two minutes by Providence got them back into the game in the first half of the second but CJ Smith scored his first of the season to tie the game.

Rochester was left scrambling in front of their own net as you can see below on the first goal against and on the second a great screen shot gave the Bruins the lead at the time.

CJ Smith scored his first of the season with a quick snap shot after a Curtis Lazar face off win.

Providence ties the game 1-1 with a goal from Jakub Lauko. pic.twitter.com/dqaJGUEoBi

Anders Bjork puts Providence up 2-1 with a PP goal. pic.twitter.com/WBZsAwlxCO

CJ Smith scores his first of the season after a Lazar face off win. Game is tied 2-2. pic.twitter.com/mA7FHq2f56

The two goals from Providence evened the game up not only in score but pace of play. Three penalties helped tilt the ice towards Providence. Andrew Oglevie had two slashing penalties and Scott Wilson was called once for high sticking.

End of 2 and tied 2-2. Providence scored twice, Amerks scored once. It's a fresh game going into the 3rd. Providence had a 11-8 shot advantage in the 2nd. pic.twitter.com/k93zqeh3vr

A strong defensive start to the game fell apart in the third period. This could be where a veteran like Zach Redmond in the lineup can settle a game down as it starts to unravel.

Dalton Smith defeats Josiah Didier. Linesmen will probably get talked to about letting that one go as long as it did. #DSmithThings @hockeyfights pic.twitter.com/rFN8yVzONH

Rasmus Asplund had the best scoring chance off a centering pass from Remi Elie skating down the right side. Asplund shot it just wide and it appeared to hit Elie where he couldn’t try and redirect it in.

With the game tied a familiar situation started to unfold in the Amerks zone, a breakdown in control. Providence seized the opportunity and Oskar Steen found himself open in the slot to score the game winner with 63 seconds left on the clock.

Oskar Steen scored for Providence with 63 seconds left and they win 3-2. pic.twitter.com/yr3nRcq47V

Andrew Hammond wins that game for Rochester if he’s in net. It’s only the third game of the regular season but he’s already shown to be capable of making the saves as needed. Jonas Johansson was screened on one of the three goals but needed saves on the other two.

Great goals by JS Dea and CJ Smith to see what they can be capable of.

Tage Thompson was powering his way around the ice but Providence likely did some homework to keep a close eye on him and not give him a lot.

Holding on to close games and finding ways to win instead of losing is a yearly concern at this point. There’s 73 more games to correct that issue.

Amerks finish the weekend with a third game in less than 48 hours Sunday at 3pm in Hartford.

Final look at shots. Amerks had a 32-20 advantage but lost 3-2. pic.twitter.com/YoDwu9Oq7s

Zach Redmond and Sean Malone were banged up Friday night and had the night off as scratches.