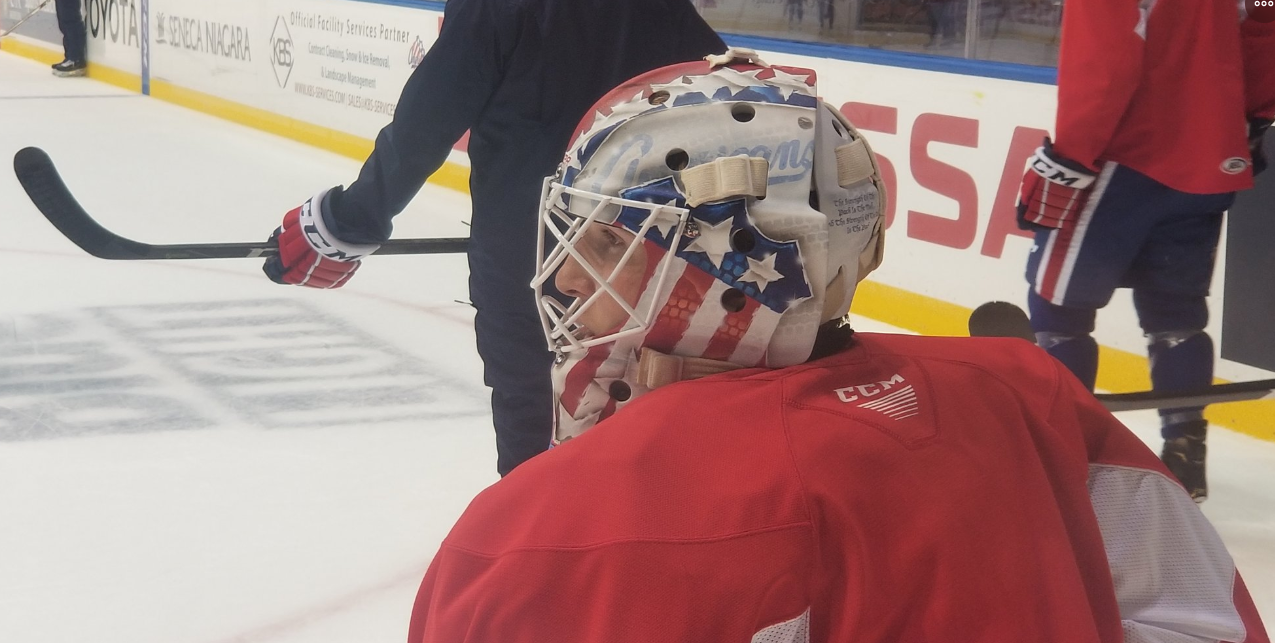 The Rochester Americans returned to practice late Monday morning and they were joined by goalie Ukko-Pekka Luukkonnen who was participating in his first team practice of the season.

“It’s really great to be back at practice after a long rehab,” Luukkonnen said after practice. “Just trying to get all of the joy out of it which I can. It was a lot of fun today.”

Luukkonnen (who will also be referred to as UPL) had successful hip surgery at the end of last April following his season in the OHL with the Sudbury Wolves and also playing in the final regular season game of the 2018/2019 season with the Amerks.

“It’s tough for me to say but it’s at least three weeks until I can play,” he said when asked about when he could play. “I don’t know the exact time yet.”

Gord Dineen was asked about the time frame as well and he said, “That’s up to the medical stuff and performance staff to dictate that.”

It’s all about how he feels, how the trainers feel, and how the doctors feel before an exact time can be locked down. There was originally a timeline of six months given when the surgery was announced April 25.

Last season he played in 58 games with Sudbury and finished with a 38-11-2-2 record. In those games he had a .920 save percentage and a 2.50 goals-against average. The 38 wins set a franchise record for Sudbury. He was also the recipient of the Red Tilson Trophy which is awardedÂ to theÂ OHL’s Most Outstanding Player of the Year as voted by the writers and broadcasters that cover the league.

He was drafted 54th overall by the Buffalo Sabres in the second round of the 2017 NHL draft.

Rasmus Asplund had a scare less than two minutes into the game Friday night when he blocked a shot off of his right arm. He instantly dropped his stick and went towards the bench holding his arm and didn’t return to the game. The x-rays came back negative, he was held out Saturday as a precaution, and was back at practice today.

Between the hash marks after the face off. Asplund was tripped up and then took a shot off the arm. #Amerks pic.twitter.com/h7I5OHaHZO

Back to the weekend, the Amerks lost an ugly 7-1 game Saturday night on the road in Utica. Credit to the Comets as they are one of two teams still undefeated after three weekends into the season. The other team is the Toronto Marlies.

“I don’t think you forget about it but you definitely take a lesson from it,” Gord Dineen said after practice talking about the game. “In the end Utica was coming in and they were firing on all cylinders with their offense.”

The first goal against was a fluke as you can see below and the Comets didn’t let off scoring another goal just 44 seconds later.

“I thought we lost our focus a little bit and it carried over into the rest of the game,” Dineen said.

After six games the Amerks have a 3-2-0-1 record which has them tied for third place in the North Division with the Cleveland Monsters who have a record of 3-3-0-1.Â There’s two area’s of concern early in the season and that is goal scoring and the power play. Rochester has been outscored 19-14 through six games and the power play is at the bottom of the league at 6.7%.

Friday night the team traded goals back and forth in the second period against Cleveland before losing in the shootout.

Yes, there’s scoring issues and power play issues but a panic button isn’t being hit on October 21 with only six games played. They also aren’t bag skating after a big loss. It’ll be time to evaluate the start of the season at the end of the month when 10 games have been played.

The next game is Wednesday night on home ice against the Hershey Bears. The team travels this weekend to Syracuse on Saturday and back to Springfield on Sunday. They’ll be practicing every morning this week preparing.