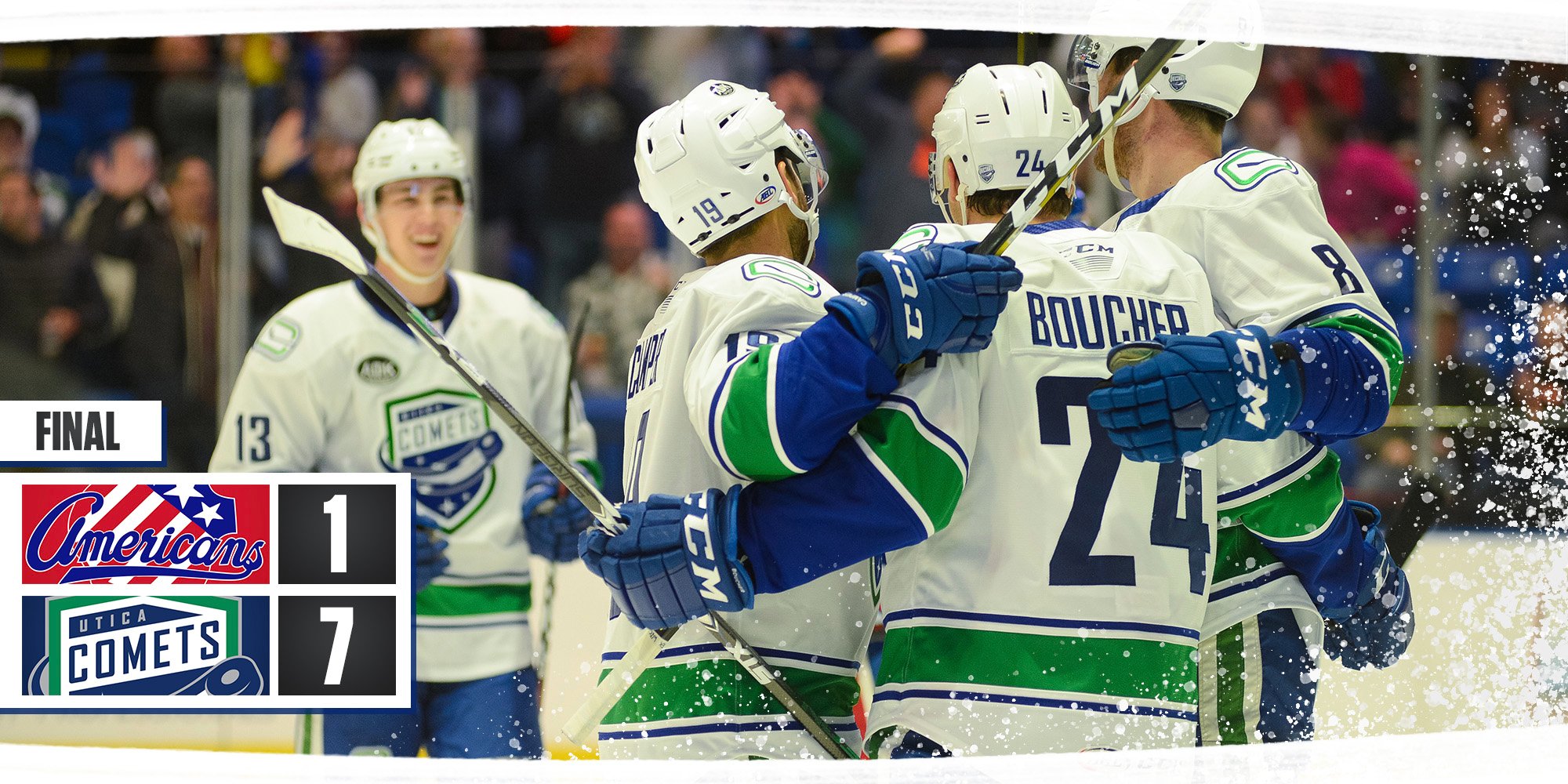 The Rochester Americans traveled to play the Utica Comets for a Saturday night game and got rocked by a 7-1 score. The first nine minutes of the game had Rochester leading the way but everything fell apart once Utica scored twice within 44 seconds.

Tage Thompson scored the Amerks only goal with assists to Sean Malone and Brett Murray. This was Brett Murray’s first pro game.

It’s a stretch to find anything positive from this game but even when they were down 4-1 in the second period they continued to shoot pucks towards the net in an attempt to try and create something. Nothing was ever created.

Rasmus Asplund was a scratch after an arm injury Friday night.

The game started with Rochester leading the pace of play which has been common now through six games this season. They had 12 shots on the Comets through just over nine minutes but the ice quickly tilted. Two goals on two shots within 44 seconds put the Comets into an early 2-0 lead. They scored again to take a 3-0 lead with a short handed goal at 15:31.

Brett Murray playing in his first pro game forced a turnover on the wall and then Sean Malone was able to spot Thompson skating in and set him up for a shot with 1:28 left in the first period to put the Amerks on the scoreboard. That was the third goal of the season for Thompson.

Comets score their 2nd goal on their 2nd shot. Reid Boucher scores his 7th of the season. Comets lead 2-0. pic.twitter.com/o5K2Pc5l0u

Wacey Hamilton put the Comets up 3-0 with a short handed goal. pic.twitter.com/KTFGGuqwPw

Tage Thompson don't ever leave or no one will score. Amerks get on the board. Comets lead 3-1. pic.twitter.com/qvlwjDPIOz

End of 1. Amerks had a 12-0 advantage in shots just over 9 mins into the game and then the Comets shot twice, scored twice, now lead 3-1. Amerks out shot them 18-10 but Zane McIntyre is seeing everything. pic.twitter.com/7YKgFsT1tI

Utica scored 68 seconds into the second period and that was the only highlight. Zach MacEwen scored off a pass from Justin Bailey to give them a 4-1 lead.

Rochester had a 17-9 advantage in shots in the second but it was a lot of pad shots and goalie Zane McIntyre wasn’t giving up rebounds for second or third chances. The Amerks had three power play chances including one five on three for 1:25 but had nothing going for them.

If there’s any good news is that they didn’t stop shooting and trying to score even though the shots lacked any punch or real grade A scoring chances.

Back at 68 seconds of the 2nd the Comets scored their 4th of the game. Assist to Justin Bailey. Comets have scored 18 goals since Wednesday night. pic.twitter.com/XaGh6fW8lU

That's the end of 2. Comets scored once that period and lead 4-1. Amerks had a 17-9 advantage in shots in the 2nd, leading 35-19 overall – which means nothing. pic.twitter.com/VaSvUmgk5a

You didn’t miss a thing if you didn’t watch. The tanks were emptied in the third and everyone was going through the motions. Utica scored three goals to win 7-1.

Andrew Hammond was pulled after the seventh goal against. The game wasn’t on his shoulders but maybe a change at 4-1 could’ve sparked something instead of at 7-1.

At least it was a team effort.

Boucher scores his 8th goal of the season. Comets lead 5-1. That was on the PP. pic.twitter.com/e7q7tcAWaV

Comets 6-1 lead. That was Redmond in front of the net. pic.twitter.com/bNM51qOKS9

Overall shot locations. Amerks had a 46-31 advantage which is meaningless when you lose 7-1 and few could be labeled as grade A chances. pic.twitter.com/yX3RsBE4bB

Worst game of the season. Also credit to Utica who remains undefeated this season. The only other team that hasn’t lost a game is the Toronto Marlies.

Utica has scored 21 goals in three games. They have some fire power, the Amerks don’t.

Rochester also went 0/8 on the power play which included one five on three. The power play on the season is now tied for 29th in the league at 6.7%.

It was a team loss that showed for the second night in a row that this team doesn’t have an offensive punch needed.

Back to the drawing board before facing the Hershey Bears this Wednesday on home ice.

1 thought on “Recap: Comets Scored Seven and Rocked the Amerks”