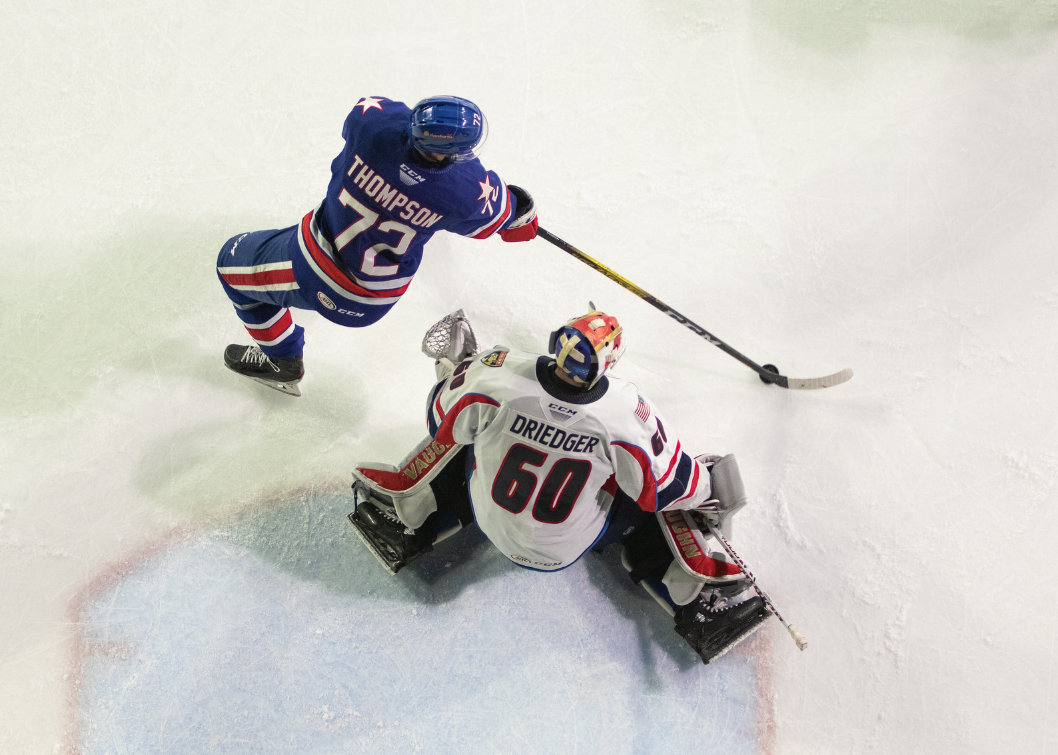 Overtime games and special teams is what has been talked about the most for the Rochester Americans through nine games this season. After a 7-6 overtime win Saturday night in Syracuse the Amerks traveled to Springfield for a Sunday game at 5pm and lose 2-1 in overtime.

Springfield scored both goals on the power play on four chances. Rochester had four power play chances but couldn’t finish on any of them.

Credit to Springfield goalie Chris Driedger finishing with 49 saves in the 2-1 win.

Before the game Rochester had signed goalie Chris O’Shea [ Elite Prospects profile ] to a PTO due to Andrew Hammond being sick. Jonas Johansson finished with 35 saves in the game. It was only a one game appearance for O’Shea.

Rochester has now earned at least a point in seven out of nine games played.

Shots, shots, shots, shots, and more shots. That’s the best description of a dominating first period for the Amerks. There was no score after 20 minutes but Rochester finished the period with a 26-7 advantage on the shot chart. There were a few grade A chances but the second and third chances just weren’t there. Another opening period where they set the pace dominating play.

#Amerks had 26 shots on net in the first period. Fitzgerald, Lazar, Pilut, and Murray were the only players without at least 1 shot. Springfield was held to only 7 shots. Scoreless so far. pic.twitter.com/aF9gQq1E7F

Tage Thompson scored the only goal of the second period and of the game at this point to give Rochester a 1-0 lead. Sean Malone controlled the puck along the boards and sent a pass to Rasmus Asplund who took a shot from the slot. Thompson was in front of the net to get the rebound and used his big frame to score off his back hand and tally his fourth goal of the season.

CJ Smith and Tage Thompson each have five shots through 40 minutes. Tage has missed a few times as well. Zach Redmond and Rasmus Asplund finished the second period with four shots a piece. Pilut, Fitzgerald, and Murray are the only players without at least one shot.

Goalie Chris Driedger for Springfield stopped 11 of 12 shots in the second and has a total of 37 saves after 40 minutes.

End of 2. Amerks lead 1-0 off a goal by Tage Thompson. After 26 shots in the 1st they only had 12 in the 2nd. Springfield had 11 in the 2nd. Second period shot chart: pic.twitter.com/PsFchdAI2N

Rochester continued to control the game but only one goal wasn’t going to cut it off of 38 shots through two periods.

Zach Redmond was called for tripping at 11:04 of the third which resulted in Paul Thompson scoring a power play goal just 19 seconds later. The shot from the point by Henrik Borgstrom appeared to be redirected over the pads of Johansson. It was a questionable tripping call against Redmond but Tage Thompson had just gotten away with a high stick at the other end of the ice.

Those tips and redirects were opportunities that alluded the Amerks through their high shot periods.

In the last five minutes of the period the Amerks had two excellent chances but couldn’t finish. Curtis Lazar had a breakaway chance that was stopped by the right pad of Driedger. Brett Murray used his size to force his way on net from the right side but his shot hit a post.

Springfield ties the game with a PP goal. Paul Thompson gets credit for tying the game 1-1. pic.twitter.com/uJH1kayQIZ

For the fifth time in nine games the Amerks went to overtime.

A hooking penalty on Casey Fitzgerald at 3:48 of the overtime session gave Springfield the chance to win and that’s what they did. They won the face off, setup the play, and a quick blast by Henrik Borgstrom beat Jonas Johansson for the win.

Game finished with Rochester leading 50-37 in shots. Goalie Chris Driedger played a great game and gets a boost to his numbers with 49 saves in the 2-1 win. Final shot chart: pic.twitter.com/zitVVnRKGx

The Amerks penalty kill is 29th in the league at 73.0% and it cost them the game. Only scoring one goal on 50 shots doesn’t help either.

Special teams in general have struggled. The power play had four opportunities but couldn’t score. The Amerks as of Sunday night were 26th in the league at 11.1%.

Tage Thompson had eight shots on net in the game and probably another five to six that missed the net. Zach Redmond finish with six shots and CJ Smith had five.

Rochester is now 5-2-1-1 through nine games and remains in third place in the North Division.

Coming up this week the Amerks play at home Wednesday (vs Providence) and Friday (vs Binghamton). They’ll travel to Utica to play Saturday night.

Updates on the status of those not playing here: [ Starting Lines by Game ]