The Rochester Americans scored ten seconds into the third period to tie the game and then had to score with only 12 seconds left in the third period to tie the game again and force overtime. The final score of 7-6 is an obvious sign that this game wasn’t a goalie dual at all. Andrew Hammond was pulled after allowing six goals on 21 shots. Scott Wedgewood was in net for Syracuse and allowed seven goals on 28 shots.

It was a big game for JS Dea and Curtis Lazar. They both scored two goals, had two assists. One of those assists for each was on the overtime winner scored by Lawrence Pilut.

After Syracuse scored their sixth goal at 7:28 of the third period they didn’t have another shot in regulation. Johansson finished the game with the win making three saves on three shots in overtime. The Amerks defense struggled throughout the game but shut down the Crunch at the right time.

Here’s how the game evolved..

The teams traded power play goals in an evenly paced first period. Gemel Smith scored at 6:33 for Syracuse and Curtis Lazar scored at 13:39 for Rochester. Syracuse finished with a 8-5 advantage in shots. Smith made his goal look easy skating in on Brandon Hickey and Will Borgen and then scoring five hole.

Curtis Lazar scored his first goal of the season off a cross ice pass from Lawrence Pilut. Secondary assist to CJ Smith.

Goals, goals, and more goals in the second period. A total of five scored between the two teams. Boris Katchouk scored at 4:51 of the second to put Syracuse up 2-1. Rochester answered back with two goals in 21 seconds when Casey Fitzgerald and Sean Malone scored. The two goals forced Syracuse to use a rare second period timeout. It appeared to work. Less than two minutes later the Crunch tallied two goals in 65 seconds by Ben Thomas and Cory Conacher.

Casey Fitzgerald scored off a great pass from Curtis Lazar on the two on one rush.

Sean Malones goal was scored by taking a beating in front of the net and holding his ground to tap in the loose puck.

Syracuse scored off a combination of bad defensive plays and a screen.

Another view courtesy of replay. pic.twitter.com/Ornwjf5FJj

This was his second. Forgot he scored last season. Thanks Ryan and Don for the correction!

Malone from Fitzgerald and Aplund! Amerks take a 3-2 lead off two goals in 21 seconds. pic.twitter.com/yZSYjkm8iR

Cory Conacher puts the Crunch up 4-3. Amerks had 2 goals in 21 seconds. Crunch followed up with 2 in 65 seconds. pic.twitter.com/CXbReyNUPA

Another 20 minutes of hockey with five goals scored. This game wasn’t a goalie dual in any way.

Tyler Randell took a roughing penalty going after Daniel Walcott which provided Syracuse with a power play opportunity and they put it to good use. Alex Barre-Boulet scored with a rocket of a shot over the right shoulder of Andrew Hammond. Similar to the second period it didn’t take long for Syracuse to score another one. Gemel Smith scored his second of the game just 77 seconds later to take a 6-4 lead.

Hammond was taken out of the game, second time in three games, and replaced by Jonas Johansson who finished with three saves on three shots faced.

Curtis Lazar scored his second of the game with 6:45 remaining on the power play with what looked like a simple shot towards the net and the puck found it’s way through a crowd.

Rochester pulled Johansson with 87 seconds left in regulation, 40 seconds of that on the power play, and didn’t stop forcing attempts in the Syracuse end. JS Dea scored his second of the period with just 12 seconds left on the clock to tie the game up at six. Assists to Lawrence Pilut and Scott Wilson on the game tying goal.

JS Dea scores 10 seconds into the 3rd to tie it 4-4! Lazar and Wilson forced the turnover. pic.twitter.com/QSd1NswV5T

Gemel Smith scored his 2nd of the game to give Syracuse a 6-4 lead. Two goals for Syracuse in 77 seconds. pic.twitter.com/mW39QiNWel

Lazar power play goal! #Amerks are back to within 1. Assists to CJ and Redmond. pic.twitter.com/WjhthSUT4w

This was the fourth overtime game in eight games played for Rochester and it was also their third win.

Lawrence Pilut scored at 4:20 of the overtime session off a pass from JS Dea to finish the comeback win. Curtis Lazar earned the secondary assist.

It wasn’t pretty. The goaltending by Hammond was rough and so was the defense. Two rough games out of three will be something to watch moving forward. At the other end of the ice Scott Wedgewood had a rough game for Syracuse as well.

Big nights from the players expected to score is what helped.

Three power play goals in two games is a big step in fixing an aspect of the Amerks game that had struggled through the first six games of the season.

Will Borgen didn’t board the bus to Springfield which likely means he’ll get called up to the Sabres again.

Here’s the final shot/goal chart. It wasn’t updated by period on the AHL web site. 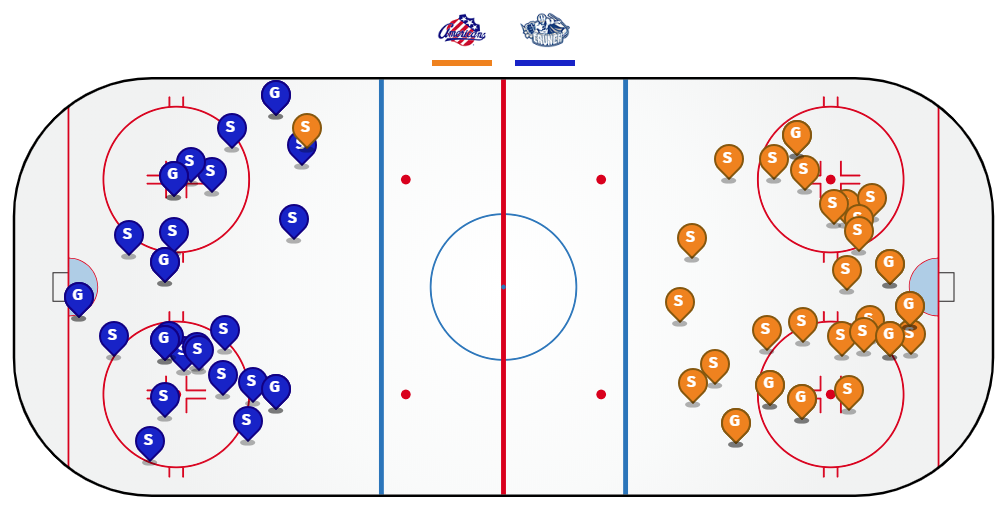