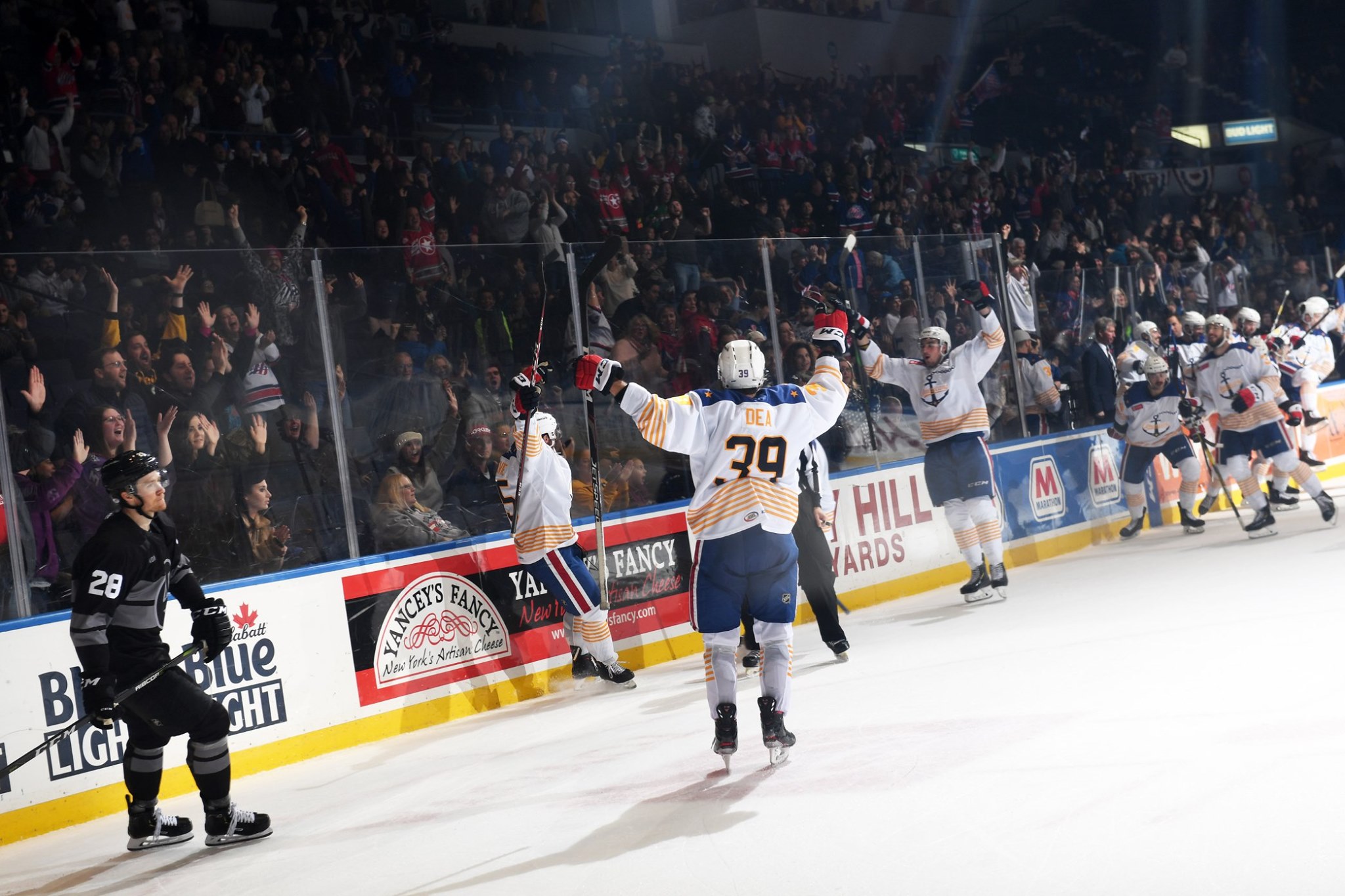 The Rochester Americans have been playing with a less than ideal roster but that hasn’t stopped them from winning five of their last six which includes a current three game winning streak. The glass appears half empty and the odds of continuing the success feel low but the team is putting up points and is currently top five in the league and tied for second place in the North Division.

Quick sidenote, why hasn’t there been a new article in over a week? I started a new job with new hours which means I’m not at morning practices with extra time to write articles. I had been working hours that provided some more flexibility to dedicate time to the site. The coverage will continue here going forward, it’s just an adjustment period for a short tiem. Make sure to follow along on Twitter via @LetsGoAmerks for continuous updates.

Time for a run down of the recent wins, injury updates, roster notes including Randy Sexton talking about additions, and some stats.

Wins are wins and points are points

Rochester has won three straight, has points in five of the last six games, and has points in 12 out of 16 games. The Amerks are also only one out of five teams in the league that has lost three games or less in regulation. Seven out of 16 games have been played into overtime but points are points.

The winning streak started November 13 with a 4-3 win over Syracuse. Rochester dominated early carrying a 3-1 lead into the second period. Syracuse responded with two goals in the second to even up the game. Eric Cornel scored the game winning goal 73 seconds into the third period and Rochester was able to hold Syracuse off. Kevin Porter, JS Dea, and Tyler Randell scored the other three goals. Jonas Johansson earned the win with 28 saves.

A 3-2 overtime win on November 15 against Cleveland was another nail biter. JS Dea and Lawrence Pilut put Rochester up 2-1 after 40 minutes and it looked like they would hold on for the win. Cleveland tied the game up with 65 seconds remaining in the third period to send it to overtime. This was the seventh overtime game for Rochester through 15 games played. Lawrence Pilut setup a quick turnaround down ice setting up an overtime winning goal from Andrew Oglevie with a primary assist to JS Dea.

The most recent win was last Saturday in Utica when the team scored four unsanswered goals after being down 2-0 early in the first period. Zach Redmond, Andrew Oglevie, Sean Malone, and Casey Nelson scored goals for Rochester to lead the team to a 4-3 win. Utica was able to score with 35 seconds left to get within a goal but it was too little too late. Andrew Hammond came within about a foot of scoring an empty net goal but was robbed by Wacey Hamilton.

That’s how many the Amerks played with last Friday against the Cleveland Monsters in the 3-2 overtime win. Due to injuries and call ups the team dressed Nathan Paetsch and Brandon Hickey at forward. Paetsch started his pro career as a forward and has played there throughout his career so it wasn’t that far fetched. Leading up to the game Brandon Hickey approached Gord Dineen and let him know he’s played forward and gave it a go. As expected they played a competitive game and shut down the Monsters when they were on the ice.

The idea is fun to talk about after the fact but it isn’t ideal.

Shaw Boomhower was called up from Cincinnati and was able to join the team in Utica. That meant only Nathan Paetsch had to play forward that game. Brandon Hickey was a healthy scratch.

Call ups and injuries are going to happen but missing nine players is almost unprecedented.

Rochester has added three players since the injury bug has hit. The team had called up Pascal Aquin and Shaw Boomhower from Cincinnati. They also signed Brady Vail to a PTO. Vail was also playing with Cincinnati but on an ECHL contract so he wasn’t technically a call up.

Aquin has two assists in three games. Boomhower has only played in one game, last Saturday in Utica, and his impact on the game was a fight against Dyson Stevenson. A decent scrap where they both earned an extra two minutes for removing their helmets before throwing some punches.

Brady Vail has played 41 games in the American League since the 2012-2013 season with three teams other than Rochester. In those 41 games he has six points (2G+4A).

What about adding new players from outside the organization?

When Randy Sexton was on ESPN Rochester he stated that they look every day. He has mentioned before that they have a very specific set of criteria. “We look for players every day but we have a very specific set of criteria both from a player perspective and from a human being perspective. We don’t just sign players to throw them in a jersey out in the roster to say hey look what we’re doing. We have a methodical approach and we have guys that we think meet the criteria of being a Buffalo Sabre and Rochester American. If we can find those guys we sign them up, if we can’t we don’t.”

This has been stated before but the only additions have been internally from Cincinnati. The depth is working for now as the team adds points in the standings but is is sustainable? Only time will tell.

When asked about adding a number one center to improve the power play Sexton said, “I think when we’re healthy we certainly have enough talent on the team to have a successful power play. Power plays are an interesting piece. It’s not just about having gifted scorers, you have to have chemistry. If you look at our roster when we’re 100% healthy I think we have two very good, very good power play units. However we have not developed the chemistry yet. That’s something that the injuries may have interuppted a little bit. Are we looking to supplement and improve our team? Absolutely. We’re not going to do it to just throw a new name on the roster to say hey look what we did.”

Take a moment to listen to the entire segment:

Everyone is asking about the goalie of the future.

Randy Sexton said, “internally we believe that a rookie goaltender needs to approach 40 starts in his first year pro.”

Luukkonen is currently in Cincinnati and the plan is to get him 16 to 18 starts by Christmas and then evaluate the next steps from there. The belief is that Rochester has solid goaltending with Andrew Hammond and Jonas Johansson which could mean that Luukkonen stays in Cincinnati even longer. The pressure is on for Hammond and Johansson to keep winning games.

A date hasn’t been set yet but he will be returning. Buffalo Sabres assistant coach Don Granato is healthy again and is working his way back into the day to day operations around the team. Randy Sexton stated on ESPN Rochester that they’re just going through the transition process.

Initial reports were that Don Granato was hospitalized with pneumonia but now that he’s healthy it’s been revealed that it was a lot more than that. This article from The Athletic explains all of it.

What a journey for Buffalo assistant coach Don Granato whose brush with death is now behind him and he's back in his "happy place" – the rink. https://t.co/g0ba7cs4mW

The Weekend Ahead vs Two Different Teams

Rochester has played Hartford once this season, the fourth game of the season, and they won 3-2 in a shootout.

Rochester has already played Binghamton twice this month and they’ve split the games. A 4-2 win for Rochester and then Binghamton had a 4-3 win in a shootout.

The AHL web site has every stat available but I also wanted a place to quickly access and track current stats for just Rochester. The menu on this site now has an option called Team Stats where you can see information on the record, attendance, special teams, average shots, goal differentials, and comparing last year to this year at the same point of the season.

Not only are the Amerks putting up points in the standings but they also hold an advantage over teams with everything except for special teams.

If you’ve been going to Amerks home games and thought the power play has been exceptionally bad you aren’t wrong.Unfortunately special teams are at the bottom of the league. The power play is ranked 25th at 11.7% and the penalty kill is ranked 26th at 76.9%.

Hartford is the top team in the league and has a power play ranked 27th in the league. A strong special teams unit is always preferred but isn’t necessary at this point of the season.