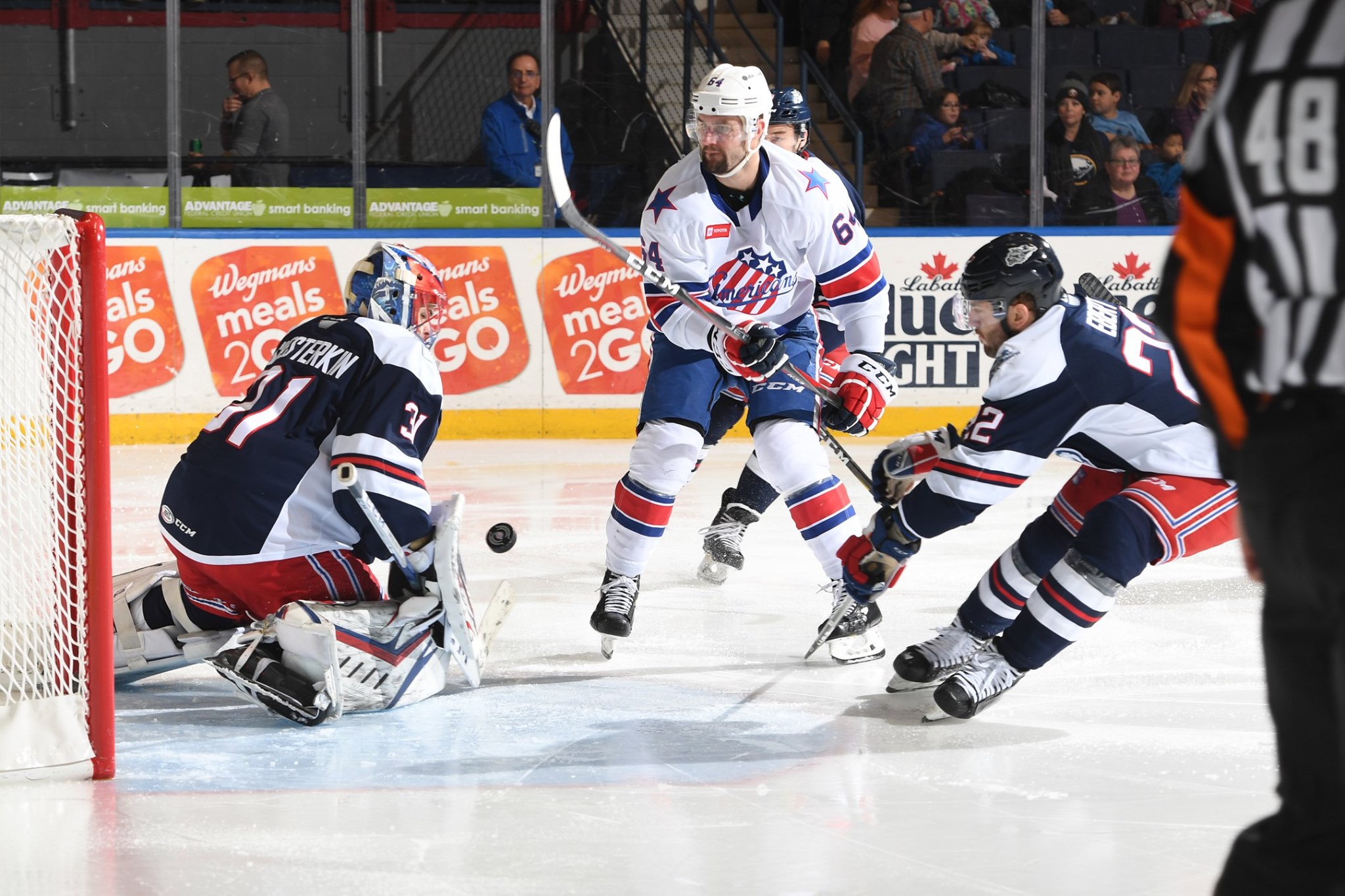 On paper when one looked at the lineup Friday night for the Rochester Americans it was another game where you question how they’re going to get it done. They’re missing six key forwards due to a combination of call ups and injuries. The third line was Dalton Smith, Sean Malone, and Tyler Randell. The fourth line was three players who were recently playing in the ECHL – Brady Vail, Pascal Aquin, and Shaw Boomhower. Clearly no offense to those players but that bottom six would likely give another team a lot of confidence. They also gave this Rochester team a lot of confidence, especially that third line.

At the end of the night what matters is the result and the Amerks played their best team game of the season and shutout the Hartford Wolf Pack in a 4-0 win. Andrew Hammond finished the game with a 25 save shutout. Heading into the game the Wolf Pack were the number one team in the league.

“Definitely a big game,” Zach Redmond said after the win. “We knew what their record was obviously and this was a good measuring stick for us with a great outcome.”

Redmond finished the game with three assists and has five points (1G+4A) in his last three games after missing two from a minor injury. Prior to missing two games Redmond had gone four games without a point and just looked off with his normal style of play. That’s not the case anymore.

“I haven’t had a lot of time to process it but I’m thinking that’s probably the case,” Redmond said when asked if it was the best team game of the season. “We started and finished the same way and there weren’t a lot of holes in our game. Everybody seemed to be talking and keeping it somewhat simple at home, which is a change for us. So definitely a good team win to build on.”

Gord Dineen talked about the game saying, “Tonight we talked about a 60 minute game and our group really came out strong and carried it over as the game went on.”

Andrew Oglevie started the scoring with a goal just 22 seconds into the first period. Zach Redmond took a shot that ended up behind the net that he was able to chase down and follow up with a quick pass to Oglevie in front of the net for a one timer. That was Oglevie’s fifth goal of the season matching his goal total from all of last season and also exceeding his point total from last season.

Andrew Hammond earned his second shutout of the season, Andrew Oglevie scored a quick goal which would be the game winner, Scott Wilson scored two goals, and Zach Redmond had three assists but the real star of the game was forward Tyler Randell who scored the second goal of the game.

Randell said, “I’ve been tagged as a tough guy and obviously the game has changed over the years and I’ve had to adjust. Every summer I’m working on the skills to stay in the league but continue to get better.”

Randell has been in the lineup due mostly in part to injuries and call ups. The team doesn’t have any extra healthy forwards which means more ice time and he’s taking advantage of it. That line of Randell, Malone and Dalton Smith was relied on at both ends of the ice. They were applying pressure in the offensive zone but also relied upon to take defensive zone faceoffs.

He knows his reputation as a tough guy but also like Dalton Smith knows that in playing hockey is what will get him ice time and keep him in the league longer.

“If I can play and produce at the same time it’s a big asset so I’ve been working on that for years and going to continue it,” Randell said.

Scott Wilson scored two goals and talked about what a goal from someone like Randell can do on the bench saying,Â “Every team I’ve been on when one of the enforcers scores it’s a little bit extra loud on the bench. Randell has some sneaky skills actually, you’d be surprised in practice with some of the things he can do.”

When a lineup is depleted there’s always cliches about needing players to step up and that’s what Randell has done. He’s scored two goals over the last four games while playing his shut down role along with Dalton Smith. They’re often thought about as one dimensional players but as Gord Dineen said it’s nice to get some goals while also shutting down the other team. Once the team is healthy his playing time will likely vanish not only because of extra players but the veteran rule as well. Until that happens Randell is making the most of it.

The two goals for Scott Wilson were both in the third period with one of them on the power play.

When you watch the replay that’s what it looked like. Zach Redmond had passed the puck to Lawrence Pilut who shot the puck into traffic in front of the net. It may have gone off another Hartford player before deflecting off the rear of Wilson.

The second goal for Wilson was another bounce that went his way. A quick one timer from the slot off a pass from Eric Cornel hit former Amerks forward Danny O’Regan in the knee and deflected into the net.

Scott Wilson returned earlier than expected and said that taking last weekend off missing two games was a smart move by the training staff that allowed him to return. He said he probably could’ve played and pushed it but the time helped him return to health faster than expected.

When asked if that was the teams best game of the season Wilson said,Â “I think we played a full 60. I think a lot of times we’ve come out on top but we only played 40 to 45 minutes.”

Andrew Hammond finished the game with 22 saves and earned his second shutout of the season. Talking about the great team game Hammond said, “Our game in a nut shell keeps getting simpler and more effective. I think our execution was as good as I’ve seen it all year. The guys played great in front of me and made it pretty easy tonight.”

Through 10 games played Hammond has allowed 26 goals. Subtract 13 of those goals from two bad games (allowed seven in one, six in another) and through the other eight games he’s only allowed 13 goals against. Factor in only those eight games andÂ Hammond has a .939 SV% with two shutouts. Those are some quality stats.Â Overall he’s at a .902 SV% when you factor in the other two bad games.

Rochester finishes the weekend with a road game Saturday night in Binghamton.

Here’s a recap of the scoring as they were sent out in Tweets:

This snipe by Randell deserves another look. pic.twitter.com/M74MGf5rPd

Don't blink, you might miss the linesman rushing into the scrum. pic.twitter.com/cF7OrufSew

Another view. Third assist of the night for Redmond, great shot as always by Pilut, and excellent work by Wilson down low. pic.twitter.com/60cKWJsEUi

Eric Cornel put in the work along the wall to setup the shot for Wilson. pic.twitter.com/Sbq2KMgQHT