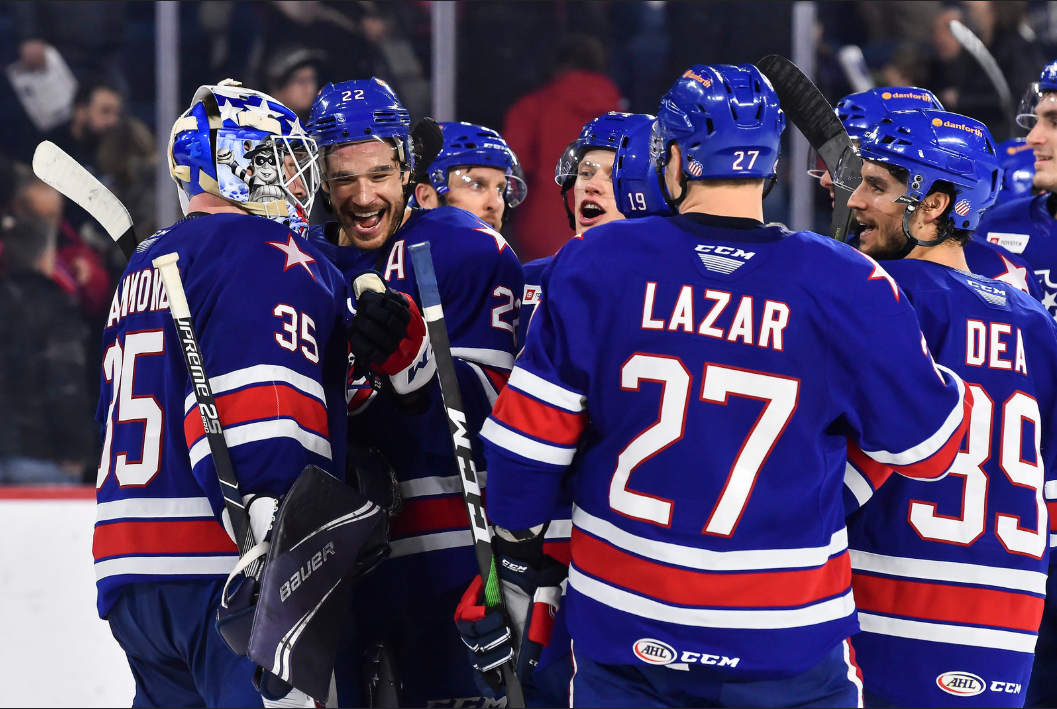 I’m running out of different ways to say the Rochester Americans won a game but that’s what they did again Saturday night in Laval with a 5-0 win. The team had five different goal scorers and Andrew Hammond earned a career best fourth shutout of the season. This was the Amerks fifth shutout of the season through 26 games. They only had five all of last season through 76 games.

Rochester has started a new winning streak with three wins last week defeating the Wilkes-Barre/Scranton Penguins at home and then Laval on the road Friday evening and Saturday afternoon.

Going into the Saturday matinee game it was going to be interesting to see how the teams played. Laval was relentless for the final 30 minutes of the game Friday night but Jonas Johansson and the Amerks denfensive game was perfect holding on to a 3-2 win.

It turned out to be a perfect game for Rochester. No goals allowed, the team was perfect on the penalty kill, and three out of five goals were scored on the power play.

Zach Redmond opened the scoring at 12:53 of the first period skating across the top of the face off circle and beat rookie goalie Caydren Primeua. Lawrence Pilut and CJ Smith earned assists on the power play goal.

John Gilmour scored his first American League goal with the Amerks at 5:33 of the second period using his speed. A give and go pass from CJ Smith sent Gilmour down the slot when he fired a shot from the hashmarks. Curtis Lazar had an assist on the play as well winning the face off.

It only took 14 seconds into the third period for Rochester to take a 3-0 lead when JS Dea scored an old school wrap around power play goal, something we don’t seem to see much of anymore. Dea had control of the puck going into the zone and handed it off to Jacob Bryson who quickly gave it back as Dea raced around the back of the net.

The third power play goal of the game was scored by CJ Smith at 4:44 of the third when CJ Smith put everything he had into a shot from the side of the net to score. The puck hit the back of the net and CJ Smith fell to the ice. It was CJ’s second goal in three games since returning from an injury. Assists to Zach Redmond and Brett Murray.

Overall special teams numbers for the Amerks are still low based on the first 13 games of the season. Over the last 13 games, since November 13, the Amerks power play is at 25.0% and the penalty kill is at 86.1% – both numbers would put them top six in the league. The team had a record of 7-3-1-2 in the first 13 games and since then they have a record of 11-1-1-0. Impressive record either way you look at it but the improved special teams has had a direct impact on the improved record.

Brandon Hickey scored the last goal of the game unassisted at the 11 minute mark of the third period. Dalton Smith and Nathan Paetsch applied pressure on the boards forcing Laval to turn the puck over and Hickey was there tos core.

The 27 save shutout win for Andrew Hammond was his fourth of the season, a career best in a season.

Rochester plays next this Wednesday on the road in Binghamton.

Rochester was without Casey Fitzgerald and Kevin Porter who were on the injured list for the game.

Zach Redmond's goal to put the Amerks up 1-0 pic.twitter.com/1vLflE3sI3

Gilmour from CJ Smith puts the Amerks up 2-0 pic.twitter.com/ock6bsHzFS

Overhead look at the goal by Dea.. pic.twitter.com/cUi5CGVoni

CJ Smith makes it a 4-0 game! Assists to Murray and Redmond. This was the 3rd PP goal for the Amerks today. pic.twitter.com/zTee1beqMG