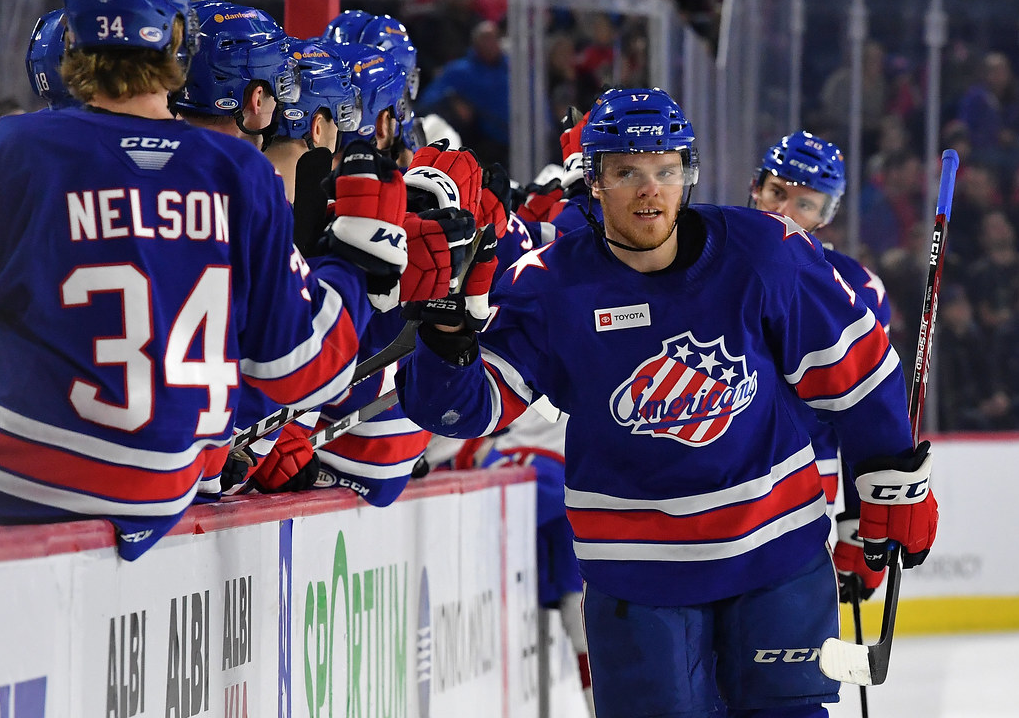 Score more goals than the other team and you’ll win a game and that’s what the Rochester Americans did Friday night on the road in Laval. The Amerks record improved to 17-4-2-2 this season with the 3-2 win. It wasn’t a dominating game like we’ve recently seen but the end result is what counts. Goals from Casey Nelson, Sean Malone, and Eric Cornel provided the offense while Jonas Johansson made 35 saves to win his eighth game of the season.

The win moved Rochester back into first place for the night ahead of Toronto. Rochester has earned points in 21 out of 25 games this season and remains tied with two other teams for the least amount of regulation losses (four) in the league.

Casey Nelson opened the scoring just 53 seconds into the game with a shot from the blue line that found its way past goalie Charlie Lindgren. Andrew Oglevie and Kevin Porter earned assists on the play.

Less than two minutes later Laval forward Charlie Hudon scored a power play goal by splitting the defensive pair of Will Borgen and John Gilmour to score a power play goal. Brandon Hickey was in the penalty box for an interference call.

With 6:02 left in the first period a short handed goal was scored by Sean Malone tapping in a rebound. Malone entered the offensive zone and delivered a perfect sauce pass to Eric Cornel who took the initial shot. The rebound landed in front of the net and Malone was there to tap it in.

Laval had a better start to the second period leading 5-2 in shots through half the period. Rochester picked up the pace with four shots over the next five minutes finally pressuring Laval more than they had been in the period. Penalties in the last 5:02 of the period by Andrew Oglevie and Curtiz Lazar provided Laval with four minutes of power play time in the last five minutes of the second period but they were unable to score.

Jacob Bryson had taken a big hit behind the net by Michael Pezzetta and Dalton Smith took offense to the high hit. The two squared off in the second period and as one could expect the clear winner was Dalton Smith.

Dalton Smith vs Michael Pezzetta. Bryson was taken out behind the net by Pezzetta with a high hit and the rest is in the video below. @hockeyfights pic.twitter.com/GUVA9109dt

The third period started much like the first with both teams exchanging goals early on.

Eric Cornel scored his fifth of the season off a rebound. Sean Malone took the initial shot on net and Cornel was there to score on the rebound. Jacob Bryson earned his ninth assist of the season. The goal was also the third game winning goal of the season for Cornel.

It only took 28 seconds for Laval to score and get back within a goal. Nikita Jevpalovs accepted a cross ice pass from Kevin Lynch, turned, and sent a shot on net that found its way past Johansson.

The rest of the game would be Rochester holding on and weathering an assault by Laval. Laval was able to fire 18 shots on net in the third period compared to only five for Rochester. Four of those five shots for Rochester were within the first 10 minutes of the period. Other than the one goal against the entire Rochester team stepped up defensively to limit the quality of shots against.

Teams have applied more pressure late in games against Rochester but when leading after two periods the Amerks have improved to 10-0-2-2. The games have been closer than anyone would probably like but the results in the win column continue to tally up. Special teams continue to trickle along, penalty killed was good killing off four of five penalties, but the power play was 0/2.

This was only the fifth game out of 25 games played that Rochester has been outshot by an opponent. The good news is that Rochester has won all five games. Laval finished the game with a 37 shots to 20 for Rochester. Laval had a 13-6 advantage in the second and 18-5 in the third.

How does this team compare to last seasons team through 25 games? They’re better. There was a concern about where scoring could come from but the real story has been limiting the goals against. Better goaltending and better defense has been a big factor. Here’s some stats to compare:

Highlights in gifs as they were Tweeted:

Charles Hudon split through Borgen and Gilmour and beat Johansson to score a PP goal at 2:27 of the first. pic.twitter.com/RB2AgYJPvH

Mugsy Malone puts the Amerks up 2-1! Great sauce to Cornel and excellent follow through on the rebound. pic.twitter.com/qzTSlwAfsR

Eric Cornel scores on the rebound this time! Amerks up 3-1. Mugsy had taken the initial shot to produce the rebound. pic.twitter.com/FbHde8fhcG

Nikita Jevpalovs scored 28 seconds after Rochester to get Laval back within one. pic.twitter.com/CRCT9m2p8t