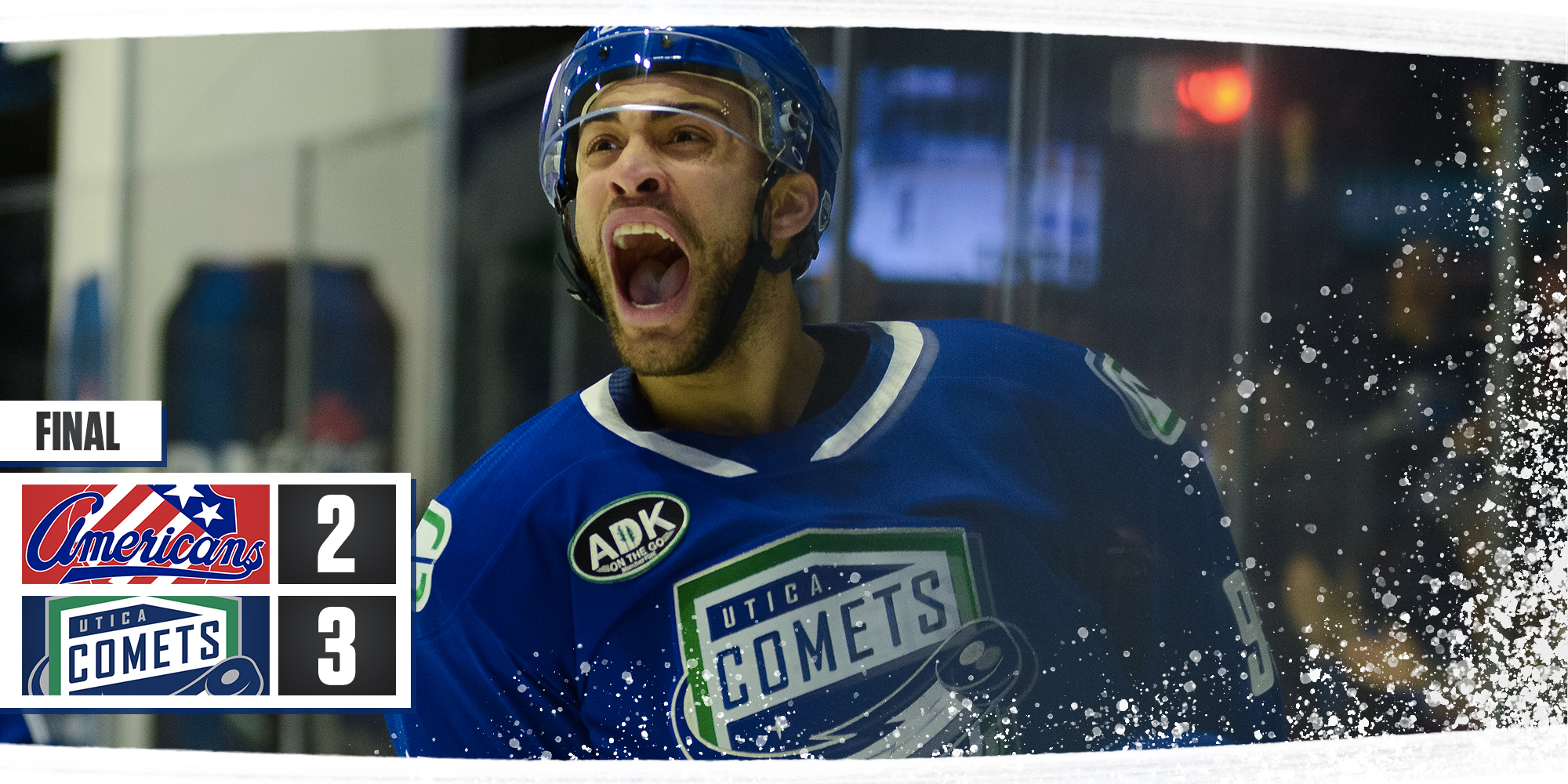 The Rochester Americans were sent home with a regulation loss off a power play goal by a familiar name, Justin Bailey. The Comets won 3-2 with two power play goals. Taylor Leier scored both goals for Rochester. The game was penalty filled with both teams being called for six minors. With the win the Comets are tied for first place with 44 points. Rochester still has two games in hand.

Utica only had two shots in the third period with one of them being the game winner. This is the first time the Amerks have lost back to back games in regulation all season.

Here’s a quick recap of the scoring.

Rochester scored the first when Taylor Leier buried his fourth goal in nine games since returning from injury at 15:13 of the first period. He scored off a pass from Kevin Porter behind the net. The score sheet was updated and Casey Mittelstadt had the secondary assist, originally said Wilson.

Taylor Leier from Porter and Wilson. #Amerks up 1-0. pic.twitter.com/1mMduzzSQN

Through 20 minutes the Amerks had a 1-0 lead and 13-6 advantage in shots. The game had the pace of two teams playing for first place.

With Remi Elie in the box for roughing the Comets scored to tie it up 1-1 at 2:15 of the second period. Brogan Rafferty snuck a shot past Hammond from the face off circle.

Comets tied it up 1-1 with a PP goal. Brogan Rafferty gets credit for this one. pic.twitter.com/C2MT5KD81B

Amerks had penalty trouble in the second period visiting the box four times which resulted in one power play goal against. The Comets power play going into the game was ranked third overall in the league.

But it was all for nothing as the Comets scored with 38 seconds left in the period to take a 2-1 lead. John Gilmour was beat to the puck behind the net and Scven Baertschi fed Wacey Hamilton in front of the net.

Wacey Hamilton gives the Comets a 2-1 lead with 38 seconds left in the 2nd. Gilmour was beat behind the net. pic.twitter.com/UEQK4r0RuA

Taylor Leier scored his second of the game at 7:32 on the power play. Tough to see from the video but it looks as though it went in off a body part again, similar to his game winning goal this past Friday. Kevin Porter won the face off before Zach Redmond and Lawrence Pilut shared a couple of passes.

Taylor Leier ties up 2-2! Power play goal tip in front of the net. Assists to Redmond and Pilut. pic.twitter.com/JJV4pzaqXG

It took just over nine minutes for Utica to register their first shot in the third period as they faced a Rochester team pressuring every play.

Unfortunatey the Amerks had too many men on the ice at 10:44 of the third which resulted in a power play goal against. Justin Bailey scored down low off a pass from Kole Lind to give the Comets a 3-2 lead and eventual game winning goal. The only two shots the Comets had in the third period with their first and the goal by Bailey.

Pass, pass, score. Comets take a 3-2 lead with a PP goal. Amerks had been called for too many men. pic.twitter.com/roauQGJAFO

Rochester had 13 shots in the third and had a 35-18 advantage but were unable to beat Zane McIntyre.

This was the first time the Amerks have lost back to back games in regulation this season.